The One Thing You Probably Don’t Know About Shark Week 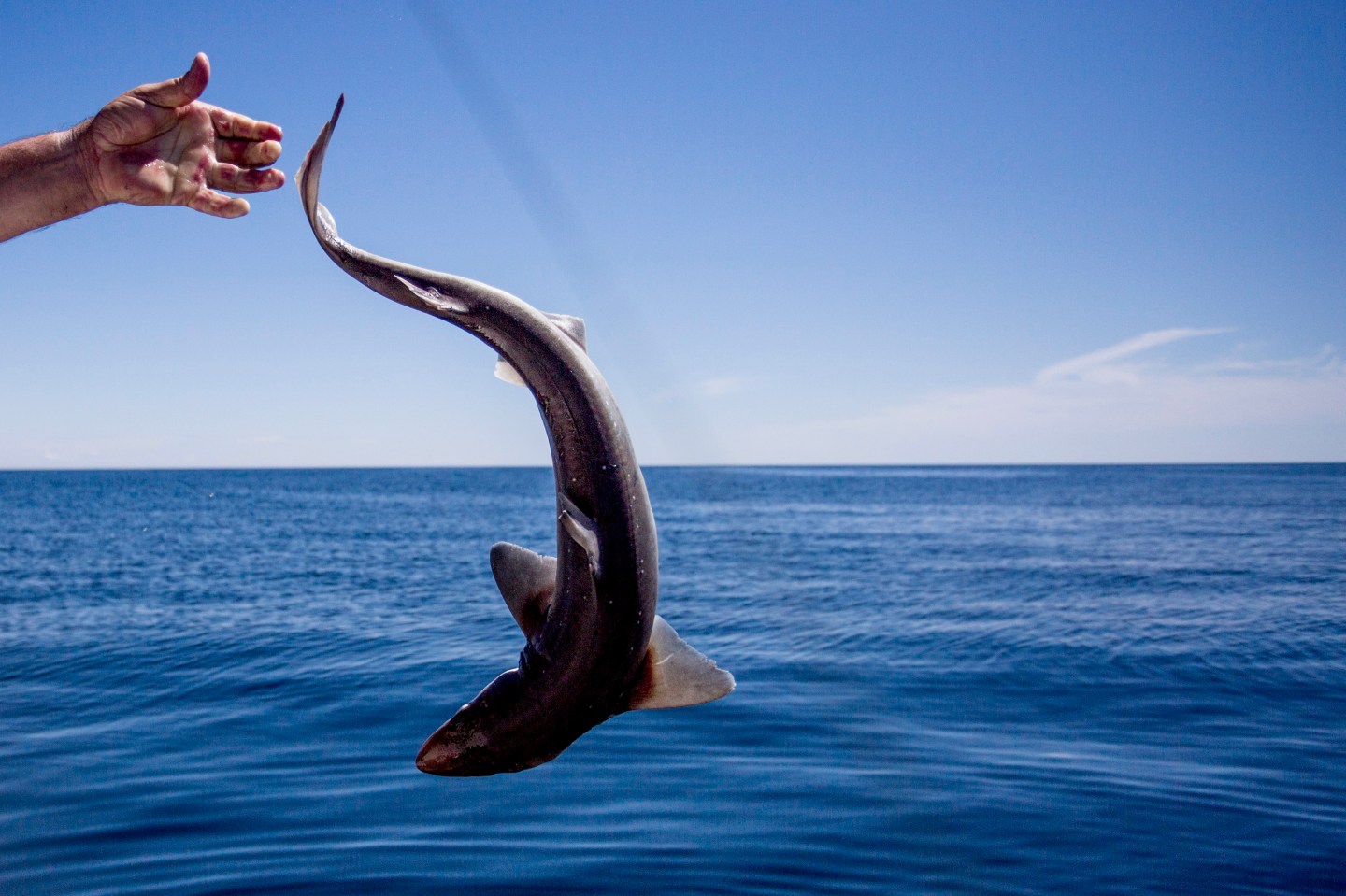 BIDDEFORD, ME - JUNE 23: Dave Johnson, a professor in the medical school at the University of New England, releases a spiny dogfish, a species of shark, back into the water in the Gulf of Maine after James Sulikowski, a professor of Marine Sciences at UNE, performed an ultrasound on the pregnant fish Thursday, June 23, 2016. Sulikowski, who found the small sharks on the Tantas Ledge about 9 miles off the coast of Biddeford, will be featured on Discovery Channel's "Shark Week" this coming Sunday for using a similar technique on much larger tiger sharks. Sulikowski is pioneering the ultrasound method of research. Previously, scientists would have to kill the shark to gain as much information as they now can through ultrasound. (Photo by Gabe Souza/Portland Press Herald via Getty Images)
Gabe Souza—Portlan Herald Press Herald/ Getty Images

It’s the peak of summer, and that means one thing: Shark Week. After nearly 30 years on the air, the Discovery Channel’s week of fishy programming is probably television’s most reliable pop-culture juggernaut. My students in the Media School at Indiana University have never known a world without Shark Week. I once asked a class of 125 undergraduates how many had watched it, and just about every hand went up. I then asked how many had ever actually seen sharks in the wild. Just a few hands were raised.

For my students—and most Americans—this means that the overwhelming majority of our exposure to sharks is through Shark Week. In other words, our interaction with sharks is mediated through a screen. What we know about them is gleaned through the cinematic version of a shark’s world that we see on the Discovery Channel.

So what is that world like? You only have to glance at the titles of this year’s specials to get an idea. The prime Sunday night slot presents “Great White Shark Serial Killer Lives,” which documents the true story of shark attacks on the California coast. Other titles include “Shark-Croc Showdown,” pitting the two predators against one another, and “Great Hammerhead Invasion.” You already know what these programs contain: amazing footage of sharks, especially their teeth, in slo-mo or quick edits for maximum dramatic effect, often interwoven with stories of shark attack victims and/or marine scientists who lend credibility to this modern scary story.

Unsurprisingly, watching Shark Week makes you scared of sharks. That’s what I found in a study I did with Jessica Gall Myrick where we asked over 500 people to watch clips of Shark Week of varying levels of violence, from extremely disturbing (the only clear clip the Discovery Channel has in three decades of filming of someone getting severely bitten by a shark, rarely aired anymore) to straightforward images of sharks swimming. Viewers were scared of the sharks after watching the footage, no matter how violent or peaceful.

But what about the facts? The facts say that you should be more scared of a mosquito than of a shark. You should be more scared of a bicycle or a vending machine. All of these things are more likely to kill you in the U.S. than a shark, according to the dedicated record-keeping of the University of Florida’s International Shark Attack File. Last year, sharks killed four people. Worldwide. That’s a pretty lame record for what the Discovery Channel hypes as humankind’s greatest predator.

This creates an interesting opportunity to understand how television affects how we perceive the world around us. Since most of us never experience any IRL interaction with sharks, and everything we learn is from Shark Week, the presentation of sharks on Shark Week becomes our “reality” of sharks. When sharks are depicted exclusively as violent, that’s how we understand them. This phenomenon is not exclusive to sharks, of course. People who watch lots of violent television feel less safe than those who don’t. The mediated world becomes our real world.

To be fair to the Discovery Channel, an analysis I did of 11 years of Shark Week episodes (yes, there are benefits to being a professor who studies environmental issues in mass media!) showed that the network has incorporated more real science, including mentioning the low risk of an actual attack, in recent years. However, if these statements are still paired with images edited to make sharks look as scary as possible, the scary image is still going to be more powerful. That’s what viewers take away: The gaping mouth, the rows of ragged teeth, the beady eyes, all coming for you.

People sometimes ask me if my recommendation is to avoid watching Shark Week. No, I think I will watch, and you should too. It’s just plain good entertainment, and I would guess that more than a few marine biologists got their first exposure to the amazing underwater world through their televisions. We just have to remember that Shark Week presents a fantasy. With its focus on pop culture this year, from Seal on a pier to Michael Phelps racing a great white, it looks like the Discovery Channel is leaning into this angle, too. Perhaps next we’ll start thinking sharks have a sense of humor.

Suzannah Evans Comfort is assistant professor at The Media School at Indiana University.