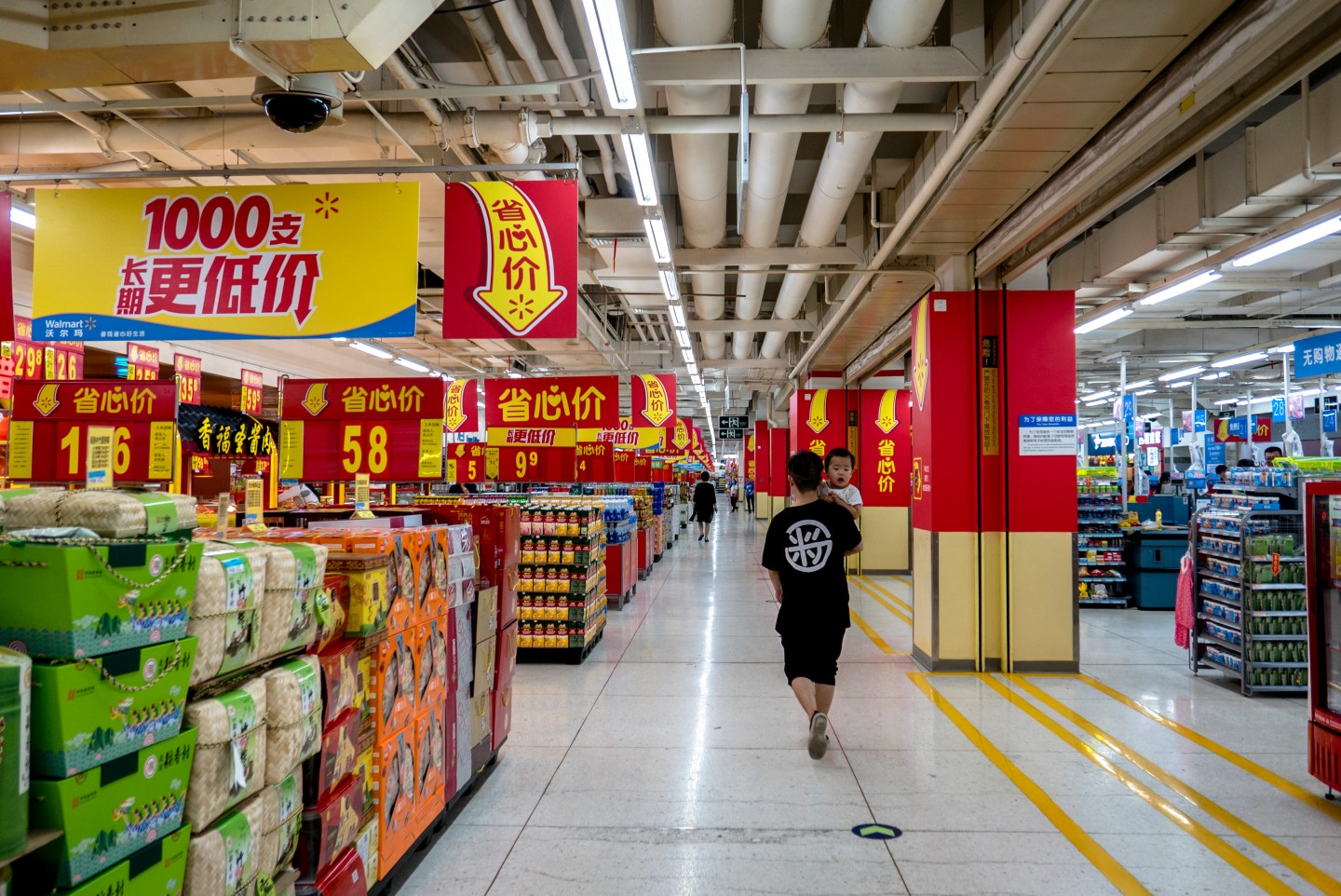 BEIJING, CHINA - 2017/05/16: A father hugging his son walks in a Walmart supermarket. According to the financial report of the first quarter in 2017, total sales of WAL-MART in China grows by 0.7%, the unit price increases 2.8%, and business profit also grows. China's business continues to develop rapidly, more and more turning on e-commerce. (Photo by Zhang Peng/LightRocket via Getty Images)
Zhang Peng LightRocket via Getty Images

China’s frozen dumpling makers are finding there’s a quick route to winning new sales – increase the vegetable content, and cut down on the meat.

This departure from traditional pork-rich dumplings is a hit with busy, young urbanites, trying to reduce the fat in diets often heavy on fast food.

For pig farmers in China and abroad, it is a difficult trend to stomach. The producers and other market experts had expected the growth to continue until at least 2026.

Chinese hog farmers are on a building spree, constructing huge modern farms to capture a bigger share of the world’s biggest pork market, while leading producers overseas have been changing the way they raise their pigs to meet Chinese standards for imports. Some have, for example, stopped using growth hormones banned in China.

China still consumes a lot more meat than any other country. People here will eat about 74 million tonnes of pork, beef and poultry this year, around twice as much as the United States, according to U.S. agriculture department estimates. More than half of that is pork and for foreign producers it has been a big growth market, especially for Western-style packaged meats.

But pork demand has hit a ceiling, well ahead of most official forecasts. Sales of pork have now fallen for the past three years, according to data from research firm Euromonitor. Last year they hit three-year lows of 40.85 million tonnes from 42.49 million tonnes in 2014, and Euromonitor predicts they will also fall slightly in 2017.

Chinese hog prices are down around 25% since January, even though official numbers suggest supply is lower compared with last year.

Since China began opening up to the world in the late 1970s, pork demand expanded by an average 5.7% every year, until 2014 as the booming economy allowed hundreds of millions of people to afford to eat meat more often. During Mao Zedong’s reign as Chinese leader from 1949-76 meat had, for many, been a rare luxury.

Now, growing concerns about obesity and heart health shape shopping habits too, fuelling sales of everything from avocados to fruit juices and sportswear.

For more about food in China, watch Fortune’s video:

“Market demand remains very weak. I think one factor behind this is people believe less meat is healthier. This is a new trend,” said Pan Chenjun, executive director of food and agriculture research at Rabobank in Hong Kong.

Guangzhou-based Harmony Catering says health is the key to reduced servings of meat to the roughly 1 million workers eating at its 300 canteens each day.

Staff at the technology companies, banks and oil majors that are Harmony’s clients will consume about 10% less meat today than they did five years ago, but around 10% more green vegetables, according to Harmony vice president Li Huang. “It’s mainly because of media, the concept of health has entered popular consciousness,” he said.

For now, it’s mostly urban and white-collar workers paying closer attention to their diets. There’s been, for example, a sharp rise in vegetarian food stations at university campuses. But the government wants a nationwide shift in eating habits.

Childhood obesity in China is rocketing, and the country also faces an epidemic of heart disease, Harvard researchers warned last year. Among the problems, they blamed growing consumption of red meat and high salt intake.

In April, the health ministry kicked off its second 10-year healthy lifestyle campaign, urging citizens to consume less fat, salt and sugar, and aim for a ‘healthy diet, healthy weight and healthy bones’.

By 2030, Beijing wants to see a marked increase in nutritional awareness, a 20% cut in the per capita consumption of salt, and slower growth in the rate of obesity, it said in its recently published ‘Healthy China 2030’ pamphlet.

Some companies have been urgently changing the mix of products they sell, going for higher-margin pork meats rather than volume. Sales of traditionally less popular lamb and beef have also been increasing.

Li of Harmony Catering says although servings of pork are down, the firm is including more beef and lamb in meals.

China’s top pork producer WH Group has been going up market, selling Western-style products in China, such as sausages and ham. A lot of this is imported from Smithfield, the largest U.S. porkproducer, which was acquired by WH in 2013.

Some producers say that the recent drop in pork consumption can be partly explained by sharply lower output. A prolonged period of losses during 2013 to 2015 forced farmers to cull millions of hogs, hitting supply and sending pork prices to record levels in 2016.

But for a growing portion of Chinese consumers, price tags on food items are less and less important. A spate of safety scandals in recent years, many related to meat, have made urban Chinese highly sensitive to food quality.

More than 80% of people in China surveyed by Nielsen last year said they were willing to pay more for foods without undesirable ingredients, much higher than the global average of 68%.

“China is in a new stage where consumption of pork and other foods is no longer a simple matter of ‘more is better’,” said Fred Gale, senior economist at the United States agriculture department.