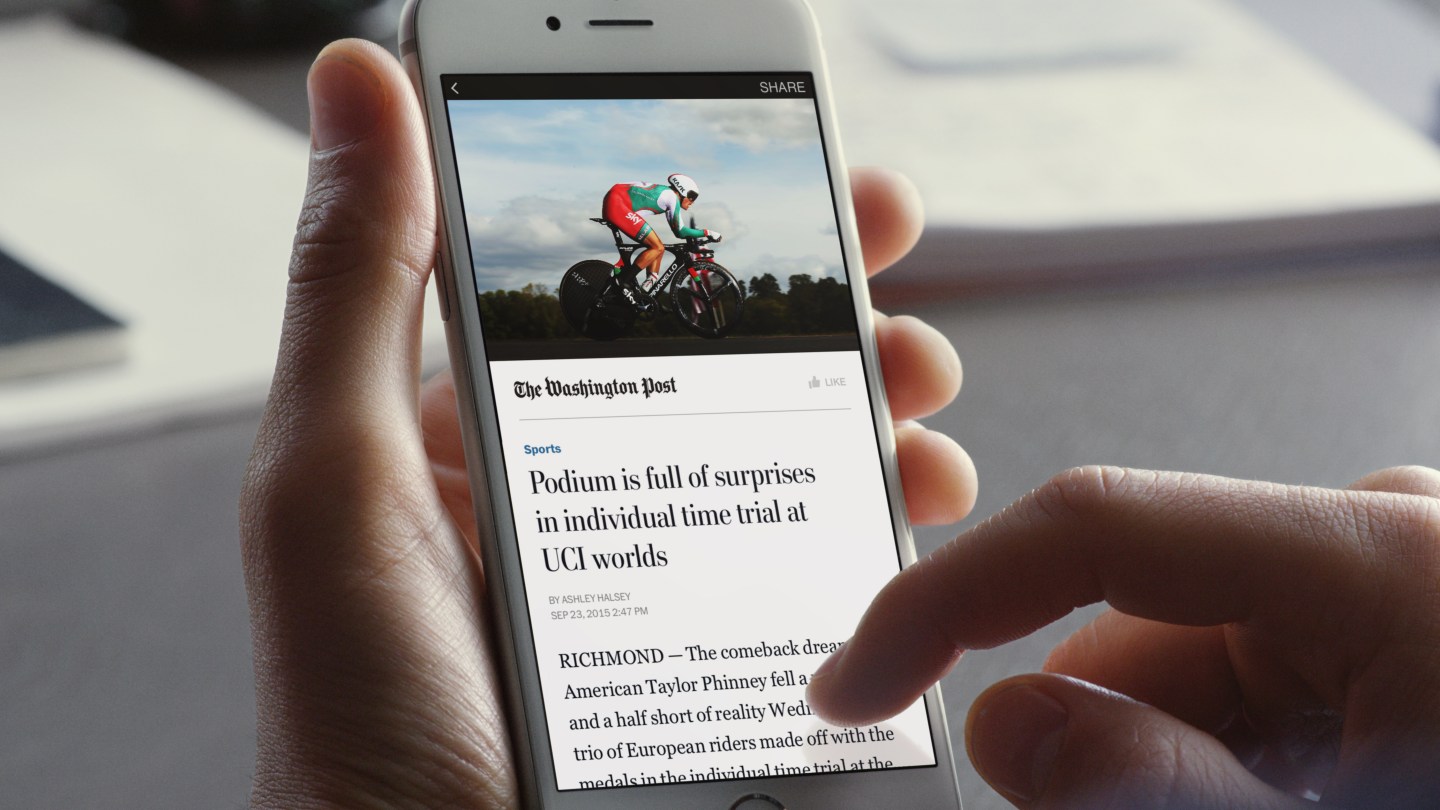 If there’s one thing you can usually count on with Facebook, it’s that any new feature it introduces will be designed primarily to benefit Facebook—in most cases to get users to spend more time inside the company’s walled garden.

That’s why an announcement Facebook made on Thursday is unusual. The company said it would open the technology behind its mobile-focused Instant Articles feature so that it works with similar competing services offered by Google and Apple.

With one step, publishers will now be able to use a Facebook software tool to produce articles that fit the Facebook Instant Articles standard, and also comply with Google’s competing AMP (Accelerated Mobile Pages) standard, Support for the Apple News format is coming soon, the company said.

This doesn’t mean Google or Apple will get any more access to Facebook’s platform than they would have before. But it does represent a kind of truce in the mobile news war, and in that sense it is a tacit admission of failure.

By supporting Google and Apple’s technologies, Facebook is essentially admitting that Instant Articles by itself wasn’t enough to entice publishers.

For the past two years or so, ever since it launched Instant Articles as a limited trial with partners like the New York Times (and Time Inc., which owns Fortune), the social network has been trying to get media companies to adopt it.

In a nutshell, the feature takes articles that have been formatted for the web and strips them down to make them load more quickly in a mobile browser.

Initially, this was an appealing idea for many publishers, which either didn’t have the financial resources or the skills to make their stories load faster in mobile browsers. But at the same time, it was a problematic deal in many ways.

The company made a number of tweaks to try and improve the situation, but it didn’t really move the needle for many media companies, especially since one of the main ways Facebook sped up the loading of pages was by blocking certain types of ads.

In addition to that, some publishers were leery of giving Facebook even more control over their content. The giant social network already accounts for a huge amount of the traffic that many media outlets get from the web, and uses its algorithm to control who sees their content and when.

Some, like the Washington Post, jumped in with both feet, but others—including Bloomberg, the Wall Street Journal, and ESPN—balked.

Even the New York Times, a launch partner, eventually stopped participating in Instant Articles, and so did The Guardian (which also pulled out of Apple News). In part, that’s because both papers were focusing on their digital subscriptions and membership programs, and Instant Articles wasn’t really helping.

Many publishers seem to be more interested in Google’s AMP standard, which is more open than Facebook’s. Although the search giant is in charge of the technology, it is an open-source project that makes its code public and theoretically allows anyone to take part in developing it.

There are still concerns on the part of some media companies that Google has too much control over AMP, and that it is interested primarily in promoting its own advertising networks and technologies, but AMP still seems to have gotten more uptake than Instant Articles. It also supports subscriptions and paywalls, which Instant Articles doesn’t.

Apple News, meanwhile, got off to a slow start, with many publishers seeing extremely low traffic from articles they formatted for the service. But more recently there is evidence that some sites are seeing improved traffic from their Apple News articles.

Apple also recently hired a managing editor for Apple News, a position that didn’t exist before, which suggests that it might be looking to beef up the service and possibly even expand it.