How Google Is Using Machine Learning to Fight Malaria 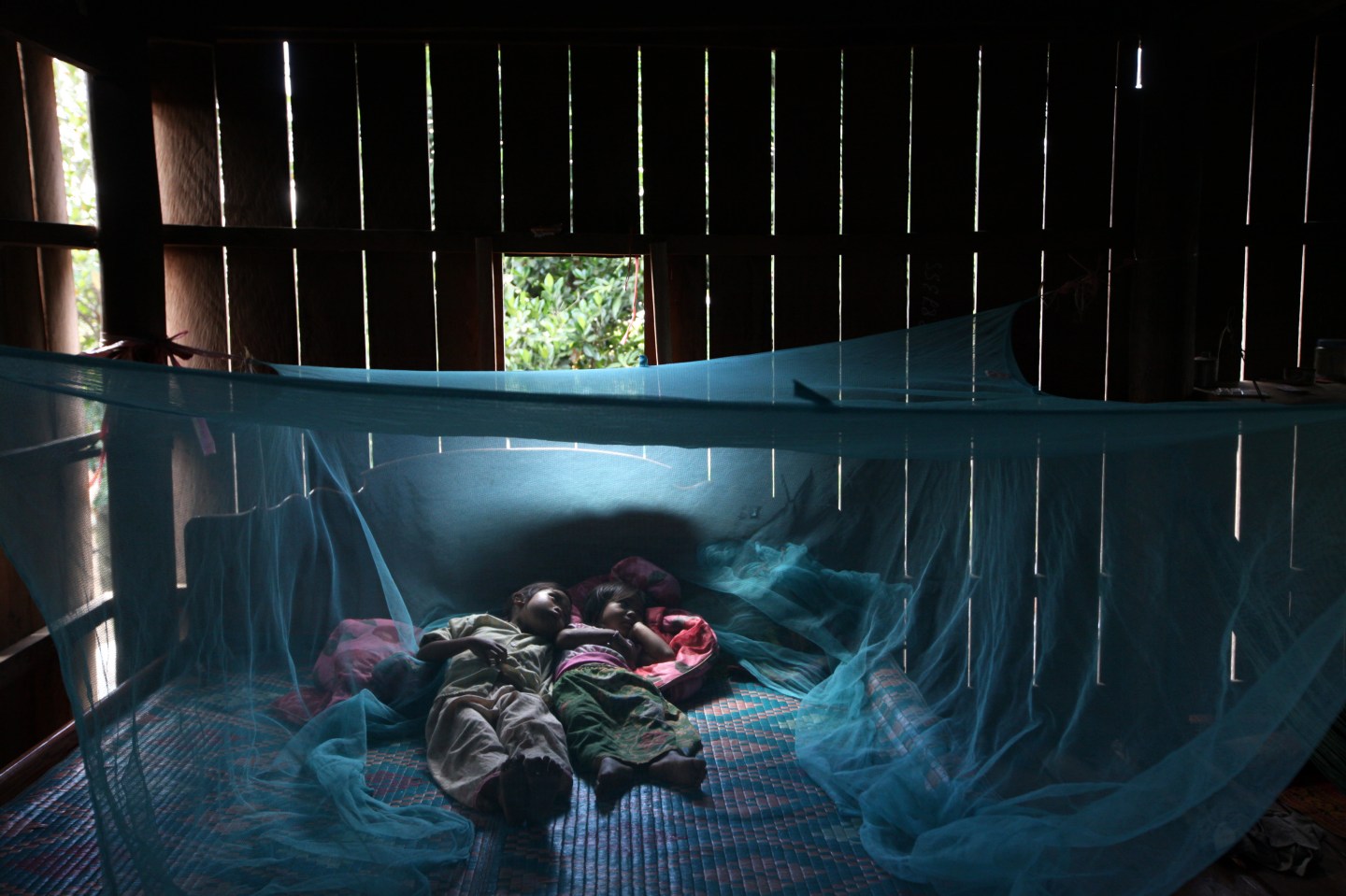 PREY MONG KOL, CAMBODIA - JULY 18: Yonta ,6, rests with her sister Montra,3, and brother Leakhena, 4months under a mosquito bed net keeping dry from the monsoon rain July 18, 2010 in Prey Mong kol village in Pailin province. Part of the great success of controlling the malaria is due to the distribution by National Malaria center (CNM) and WHO of the long lasting mosquito nets that also contain the insecticide embedded into the net causing the insect to die upon contact. According to WHO, around 3,000 people from various villages have been tested so far in an area where resistance to artemisinin surfaced, which is the most effective ingredient vital to all anti-malarial drugs used throughout the world, especially in fighting the more lethal Falciparum malaria. The results are proving that the resistant malaria has almost disappeared from the area. (Photo by Paula Bronstein/Getty Images)
Photograph by Paula Bronstein—Getty Images

Tuesday is World Malaria Day. The global health community and a coalition of public-private initiatives has successfully begun taming the scourge, with a 21% decrease in its global incidence and 29% drop in mortality rate between 2010 and 2015; still, there were 212 million malaria cases worldwide and nearly 430,000 deaths from the disease in 2015, according to the latest World Health Organization (WHO) figures.

One key tactic for fighting infectious diseases like malaria is to pinpoint exactly where they’re spreading in order to stop them in their tracks. This way, preventive measures like mosquito control and the deployment of treatment resources can be better targeted. Google, the Bill & Melinda Gates Foundation, and the Clinton Health Access Initiative (CHAI) have banded together with academic and public health partners with this very goal in mind—and are harnessing machine learning through the Google Earth Engine to accomplish it.

The organizations are taking part in a Malaria Elimination Initiative effort called project DiSARM which will be piloted in Swaziland and Zimbabwe and uses the Google Earth Engine to map malaria. The University of California, San Francisco’s (UCSF) epidemiology and biostatistics professor Hugh Sturrock—who leads DiSARM—explained exactly why Google’s tech can help fight the disease.

“Every time someone is diagnosed with malaria in Swaziland and Zimbabwe, a team goes to the village where the infection occurred and collects a GPS point with the precise infection location,” he said in an interview posted on Google’s blog. “Just looking at these points won’t allow you to accurately determine the risk of malaria, though. You also need satellite imagery of conditions like rainfall, temperature, slope and elevation, which affect mosquito breeding and parasite development.”

In addition to producing high-resolution “risk maps,” the Google Earth Engine makes this seemingly ancillary (yet critical) data far easier to collect, according to Sturrock. “In the past we had to obtain those images from a range of sources: NASA, USGS and different universities around the world. But with Google Earth Engine, it’s all in one place and can be processed using Google computers. We combine satellite imagery data from Google Earth Engine with the locations of malaria cases collected by a country’s national malaria control program, and create models that let us generate maps identifying areas at greatest risk.”

Concurrent advances in malaria drug development could also get a boost from this type of tech; on Monday, the WHO announced the next phase of a real world trial testing an experimental malaria vaccine in Africa.

Correction: April 25, 5:35 p.m.: The original version of this article misstated the mortality rate from malaria. It has been corrected.

A version of this essay appears in today’s edition of the Fortune Brainstorm Health Daily. Get it delivered straight to your inbox.