CEO Pay Is Out of Control. Here’s How to Rein It In 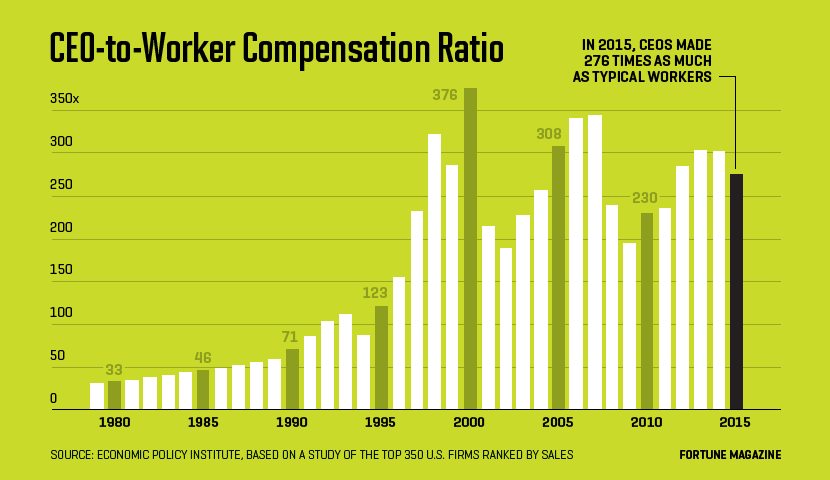 This past march, Walt Disney Co. (DIS) settled a claim by the Department of Labor that it had violated the law by deducting the cost of uniforms from employees’ wages—which brought the workers’ pay below the federal minimum wage. The violations, which occurred at Disney facilities in Florida over the past few years, didn’t add up to a lot of money. Disney will pay back wages of $3.8 million to 16,000 workers (about $230 per employee). What made the story galling is that the entire expense is roughly in line with what Robert Iger, Disney’s CEO, earns in a single month. Last year Iger netted $44 million.

Excessive CEO pay is hardly a new topic, but with the urgent concern over economic inequality, it’s a timely one. I thought about the Disney story while reading Steven Clifford’s The CEO Pay Machine: How It Trashes America and How to Stop It. The author imagines a better future—one in which compensation packages would be simplified, CEO pay would be downsized, and incentives would be properly geared toward companies’ long-term success.

Clifford, a retired CEO of King Broadcasting and a serial corporate director who admits to having grabbed his share of the loot, argues that CEO pay is a machine—that is, driven by rote policies that automatically send pay into the stratosphere. Why else would CEOs get so much, and through such a bizarre array of categories—in Iger’s case, salary, stock, option awards, “non-equity incentive,” pension, and “other”? In 2018, Iger will be eligible for a “performance-based retention award,” just in case hauling in $130 million–plus over the past 36 months didn’t do the trick.

CEOs don’t need this much for motivation. Iger is a competent, responsible executive. He would get out of bed, put on his tie, and go to work for less. Directors ratify such arrangements because everybody else does it. At least in theory, boards monitor each individual category of pay, but they never challenge the structure of the pay machine itself. Directors follow self-interest (with director fees running well into six figures, who wants to rock the boat?). They are reinforced by consultants who know that complex packages justify their existence.

The outcome is that directors subscribe to a collective delusion that such arrangements are necessary. Compensation is determined in an echo chamber in which gargantuan pay is considered normal.

It wasn’t always this way. In 1978, CEOs earned 30 times the take of the average employee; now, according to the Economic Policy Institute, they get 276 times as much. These numbers betray an attitudinal upheaval. Time past, a CEO’s pay was set on a scale with others in the same organization. This was dubbed “internal equity.” But in the 1980s, a consultant named Milton Rock sold the idea of “external equity.” Now, as if CEOs belong to a tribe of super­humans, they are paid on a scale with only their “peer CEOs.”

This is highly problematic. First, the peers often aren’t really peers. As Clifford recounts, to set its CEO’s pay, UnitedHealth Group (UNH) recently used a “peer” group stuffed with companies unrelated to health insurance, such as Apple (AAPL), Coca-Cola (KO), and Citigroup (C). It’s ludicrous to think that UnitedHealth’s CEO could be a candidate to run Apple. It assumes a generic market for CEOs that doesn’t exist.

And few compensation committees aim for the median of those peers. Most target the 60th percentile—or the 75th. ­Apparently every CEO is above average. In marked contrast, when it comes to performance hurdles, boards avoid peer groups like the plague. (No board tells its CEO, “To earn a bonus, you’ll have to raise sales faster than Amazon.”)

Rather, boards generally peg annual bonuses to a series of customized and too-easy benchmarks. This process is conceptually flawed, because they incentivize CEOs to focus on short-term goals. Moreover, CEOs are rewarded for hitting targets that are either mushily subjective or can be easily manipulated. If you want more sales, simply cut prices. If you want more cash flow, hold back investment.
When targets aren’t hit, boards often reward the CEO anyway. Nationwide Mutual Insurance once doubled the boss’s bonus by erasing the effect of claims from tornados on earnings.

Worst of all, CEOs get bonuses for merely doing their job. The CEO of Cheniere Energy, Clifford notes, got a bonus for completing the financing on a liquefied natural-gas terminal. If the terminal is profitable, the CEO will be rewarded via his holdings of stock. If it isn’t, why pay him for it? Iger got a bonus, in part, for relaunching Star Wars. Iger has done a good job and should be paid for it—but once, not three times.

Boards should be trying to get CEOs thinking like owners. That was why stock options became the rage in the 1990s. But it turned out that riskless options doled out for free don’t motivate like shares you have bought and paid for. Indeed, CEOs who get them year after year can’t help making a bundle because, sooner or later, their stock will hit a low, meaning that year’s option grant will be struck at a dirt-cheap price. Such arrangements make CEOs wealthy merely for recovering ground they previously lost.

Overall, the combination of annual and long-term incentives blurs the CEO’s focus. As Clifford observes, “Business is a constant struggle to balance the long term against the short term.” The pay machine relieves CEOs of having to reconcile these agendas. They get paid short term and long term, no matter their results.

How to break the cycle? In Clifford’s ideal, CEOs would get a salary and restricted stock—and nothing more. The stock couldn’t be cashed until retirement, and half of it would be canceled if shareholders didn’t realize an above-average return over the CEO’s tenure.

To induce boards to consider such radical change and to lower total compensation, Clifford suggests a federal luxury tax, a dollar-for-dollar tax on executive pay in any form above $6 million a year. Politically, that will be a tough sell. A less intrusive alternative, I think, would be to give more power to the shareholders who own the store. A rule enacted in the Dodd-Frank reforms requires nonbinding shareholder votes on executive pay. Why not tweak the rule so that on pay packages above a certain threshold—say $5 million—their vote is binding? Some companies would still pay more. But to avoid a vote and potentially messy publicity, a lot of boards would hold the line at $4.99 million.

Since pay, ultimately, will be a matter of board choice, companies that do it right could exercise some leadership. Many corporations run by founders or long-serving CEOs—Amazon (AMZN), Facebook (FB), Alphabet (GOOGL), Berkshire Hathaway—pay their CEOs far less than their peers. Their CEOs, in the main, have gotten rich in the same proportion as their stockholders. These firms should play up the fact that their CEOs are motivated by a desire for long-term success and the knowledge that their equity will be worth more if they do succeed. Why does any executive need or deserve more?

The issue of executive pay is sometimes dismissed with the argument that in a big corporation a few million more or less doesn’t matter. But distorted incentives do matter. And as we saw in November, Americans are angry and have stopped trusting the system. Licensed larceny in the corner office helped elect a populist demagogue to the White House. One step to winning back trust would be to insist that CEOs be treated like other mortals.

A version of this article appears in the May 1, 2017 issue of Fortune with the headline “Breaking the CEO Pay Cycle.” We’ve included affiliate links in this article. Click here to learn what those are.