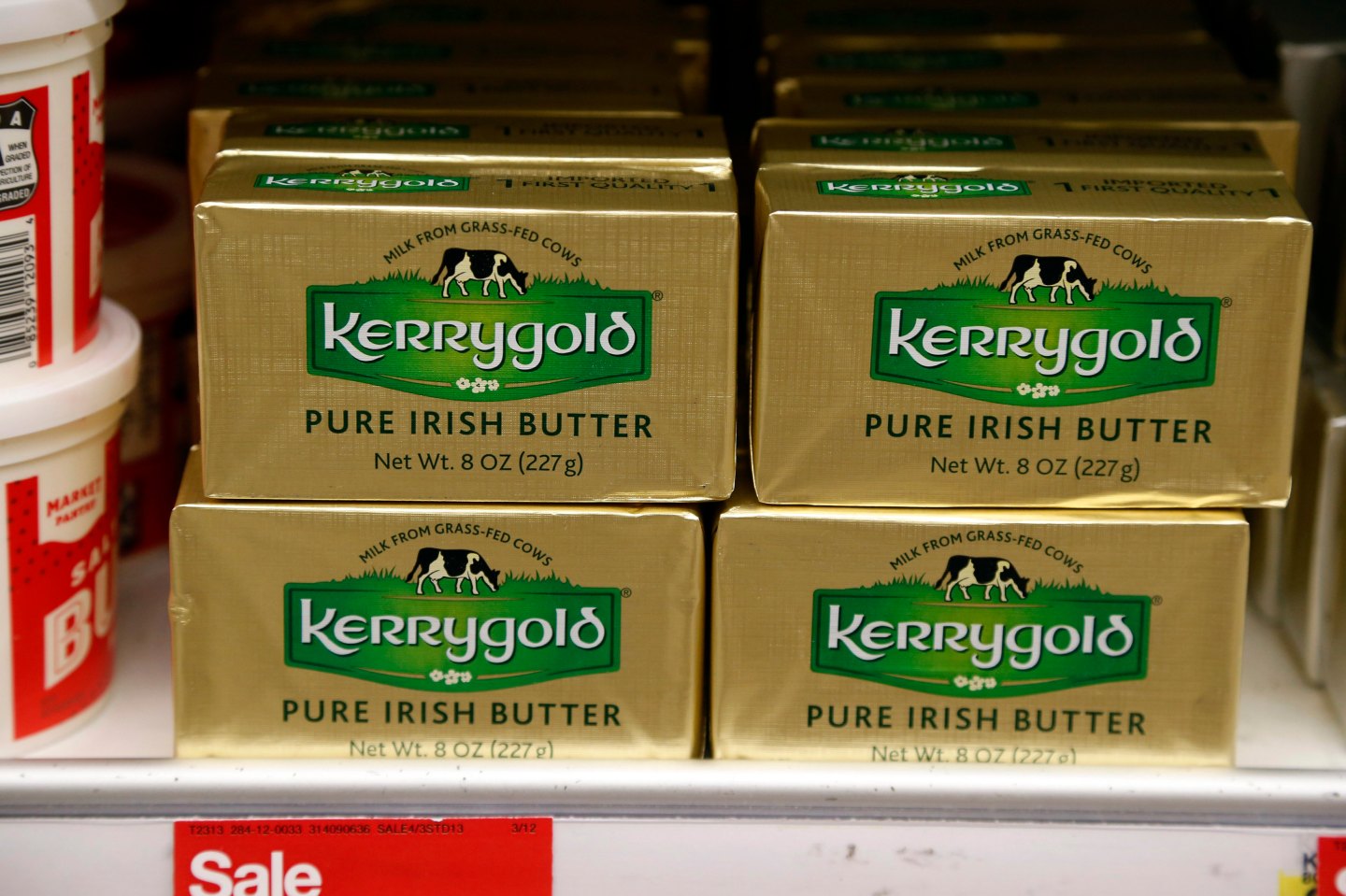 A supply of Kerrygold Pure Irish Butter sits amidst other butters on a store shelf Friday, March 17, 2017 in Edina, Minn. Wisconsin consumers tired of trekking across state lines to buy a popular Irish butter are taking their fight to court. A 1953 state law bans the sale of Kerrygold butter in Wisconsin, along with any other butter that hasn’t been locally graded for quality. A handful of butter aficionados filed the lawsuit, saying it’s unconstitutional to require butter sold in the state to undergo a government-mandated taste test. (AP Photo/Jim Mone)
Jim Mone — AP

There’s a butter war breaking out in America’s dairy aisle.

A lawsuit has surfaced after talks allegedly soured between Dublin-based co-operative Ornua, the owner of the popular Kerrygold brand, and Wisconsin-based Old World Creamery to develop an Irish-made butter that could be sold in Wisconsin.

The case stems from a protectionist law in the state of Wisconsin that essentially bans all butters produced from outside of the United States. The decades-old law has required federal or state graders to sign off on butter brands sold within the state. Kerrygold, however, is graded in the brand’s home country of Ireland. Retailers can be fined if they opt to sell Kerrygold in defiance of the law.

But Old World Creamery last week announced plans to start selling and marketing a similar-sounding Irishgold butter from Ireland this month within the state. As the Associated Press reported recently, Old World Creamery is tiptoeing around the law by importing Irishgold butter from Ireland, processing and packaging it stateside, and then having state-licensed butter graders rate it in Wisconsin. That would allow Irishgold to be sold legally in the state.

It is a slippery slope that has enraged Kerrygold’s owner Ornua.

Old World Creamery’s use of the Irishgold mark “constitutes willful trademark infringement,” Ornua said in a lawsuit filed in a Wisconsin District Court. “Defendants’ choice of the Irishgold mark and packaging substantially similar to the packaging for Kerrygold Irish butter shows a deliberate effort to trade off the enormous goodwill and strong reputation that Ornua has built up in the Kerrygold brand for many years.”

Ornua is seeking an injunction that would bar Old World Creamery from advertising marketing and selling “any butter products” that are similar to the Kerrygold trademark. It also seeks a financial award to cover legal costs.

A representative from Old World Creamery wasn’t immediately available to comment on the litigation.

One unusual allegation in Kerrygold’s lawsuit is the claim that Ornua had for months been in negotiations with Old World Creamery to sell the Ireland company’s butter under that trademark. But Old World allegedly cut off those talks in March, just weeks before it announced on April 6 that it would begin selling butter under the Irishgold trademark.

In the lawsuit, Ornua says it is also worried that consumers that want to purchase Irish butter—which has developed a strong reputation for using milk from grass-fed, hormone-free cows—would be misled to think Irishgold was a work-around for selling Kerrygold within the state.

Representatives from Ornua also weren’t available to comment on the litigation.