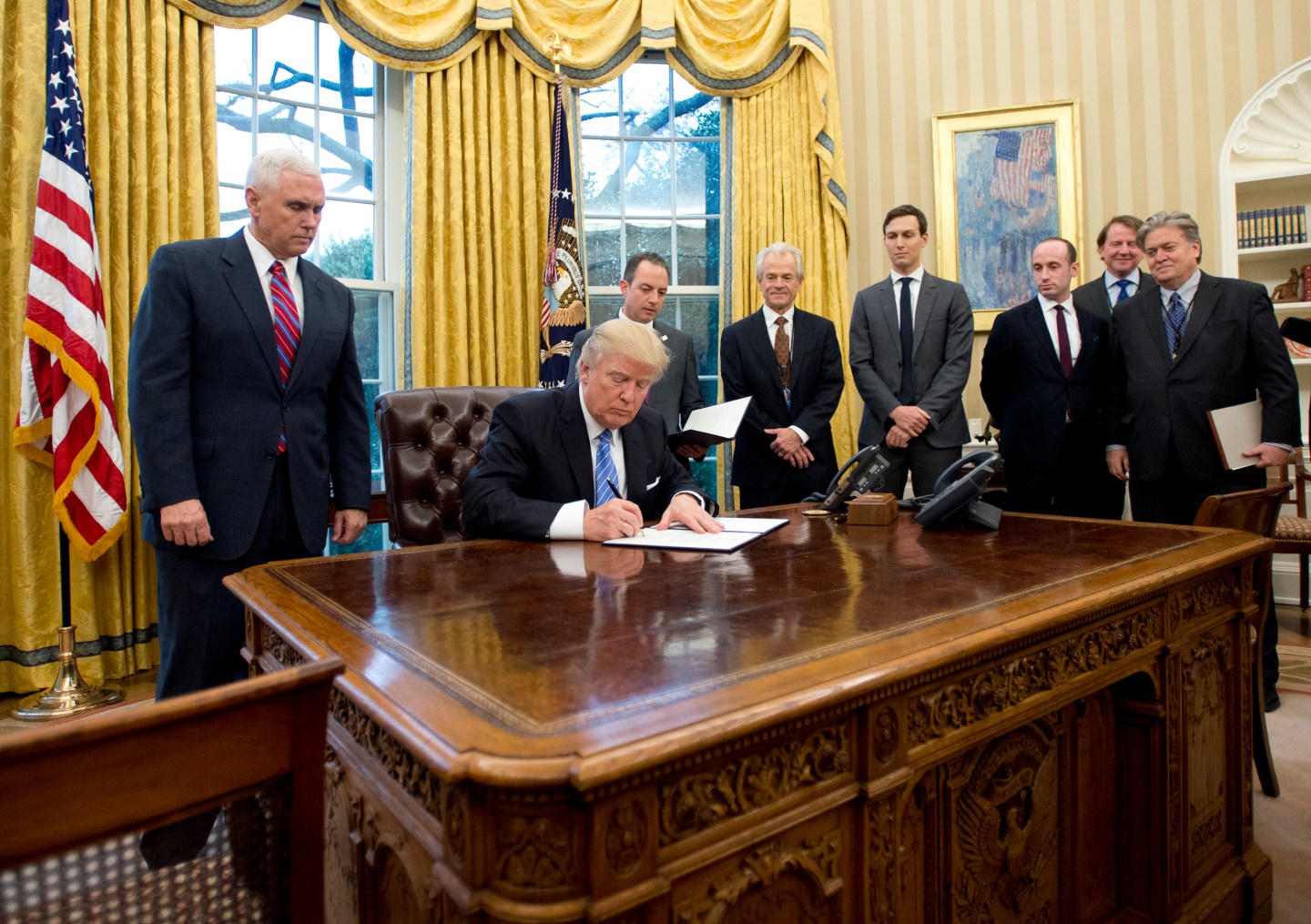 WASHINGTON, DC - JANUARY 23: (AFP OUT) U.S. President Donald Trump signs the first of three Executive Orders in the Oval Office of the White House in Washington, DC on Monday, January 23, 2017. They concerned the withdrawal of the United States from the Trans-Pacific Partnership (TPP), a US Government hiring freeze for all departments but the military, and "Mexico City" which bans federal funding of abortions overseas. Standing behind the President, from left to right: US Vice President Mike Pence; White House Chief of Staff Reince Preibus; Peter Navarro, Director of the National Trade Council; Jared Kushner, Senior Advisor to the President; Steven Miller, Senior Advisor to the President; unknown; and Steve Bannon, White House Chief Strategist. (Photo by Ron Sachs - Pool/Getty Images)
Ron Sachs—Pool/Getty Images

The federal government hiring freeze implemented by President Donald Trump as one of his first acts in office will be lifted Wednesday. But budget director Mick Mulvaney says many jobs will remain unfilled as the White House embarks on a government-wide effort to overhaul the executive branch and significantly reduce its work force.

Mulvaney told reporters Tuesday at a White House briefing that the move was part of the president’s campaign pledge to “drain the swamp” in Washington and save taxpayers money.

“It does not mean that the agencies will be free to hire willy-nilly,” he said. “What we’re doing tomorrow is replacing the across-the-board hiring freeze that we put into place on Day One in office and replacing it with a smarter plan, a more strategic plan, a more surgical plan.”

The president signed a memorandum in January freezing large portions of federal government hiring, barring the military and positions deemed necessary for national security and public safety. As part of the memorandum, Trump gave the Office of Management and Budget 90 days to come up with a long-term plan to reduce the federal government’s size.

While the guidance to be issued Wednesday does not contain agency-specific hiring goals or limits, Mulvaney said that agencies targeted with significant budget cuts in Trump’s first budget proposal, such as the Environmental Protection Agency, would be expected to make significant cuts to their workforces. Agencies that Trump wants to spend more on, like the Department of Veterans Affairs, would be expected to see their payrolls rise.

Trump’s budget blueprint calls for a 6 percent increase in VA funding, mostly to pay for rising health costs to treat veterans. The VA is one of three agencies slated for more money amid big-time cuts to other domestic programs.

Mulvaney declined to say how many jobs, overall, the administration intends to eliminate, but said: “I think it probably goes without saying that net, we think we could run the government more efficiently than the previously administration.”

Under the guidance, agencies will also have until June to submit drafts for overhauling their workforces and coming up with ideas for streamlining operations as part of a larger effort to restructure the federal government. The administration is surveying the public, academics, lawmakers and others for ideas such as potentially moving the National Nuclear Security Administration to the Department of Defense from the Department of Energy, where it currently resides.

“The president of the United States has asked all of in the executive branch to start from scratch,” Mulvaney said. He acknowledged that many such changes would require congressional sign-off. Democrats have so far opposed nearly every Trump proposal.

“We’re not trying to ram it down their throats,” he said.

Despite the order, the federal government added 2,000 workers in February and 4,000 in January, according to Labor Department figures. Several departments, including the State Department, were granted exemptions from the hiring freeze after voicing concerns.