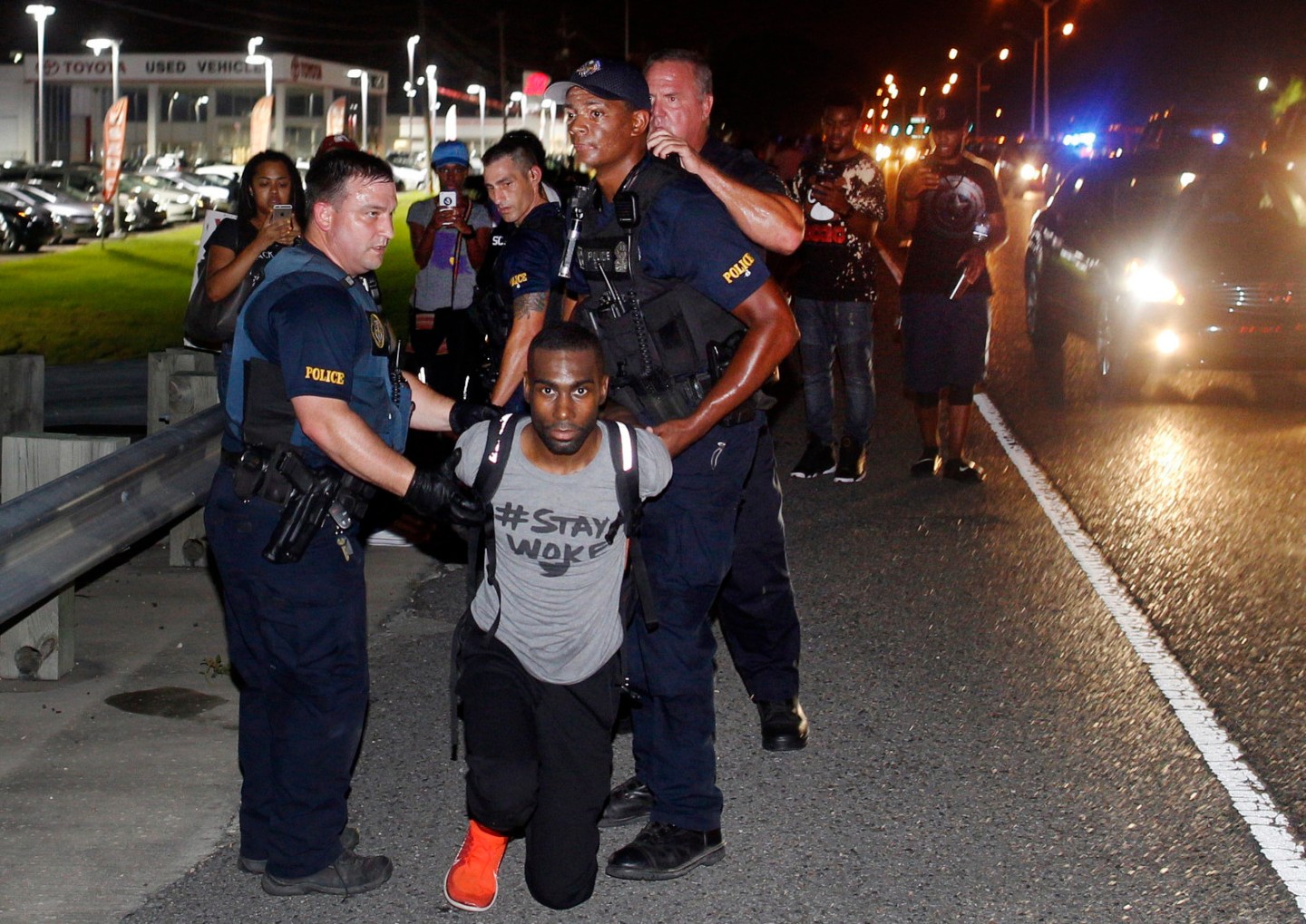 FILE - In this Saturday, July 9, 2016 file photo, police officers arrest activist DeRay McKesson during a protest along Airline Highway, a major road that passes in front of the Baton Rouge Police Department headquarters in Baton Rouge, La., after the fatal shooting of Alton Sterling by two white Baton Rouge police officers. OurStates.org, a new initiative launched by Black Lives Matter activists is trying to re-focus the movement’s efforts to state capitols, building on the momentum at the federal level to push back against President Donald Trump’s political agenda, targeting legislation on issues like policing and immigration. (AP Photo/Max Becherer, File)
Max Becherer AP

A new initiative launched by Black Lives Matter activists seeks to re-focus the movement’s efforts on state capitols, building on momentum at the national level to push back against President Donald Trump’s political agenda on issues such as policing and immigration.

The online platform OurStates.org is the latest indication that Democrats and left-leaning groups are turning their attention to statehouses after concluding that many of the policies they oppose are being enacted at the state level, since Congress has passed few major laws in recent years.

Despite the movement’s national presence, it has not concentrated “on engaging and resisting what state legislatures are doing to essentially implement the same agenda,” said Sam Sinyangwe, a data scientist with the project. “If we don’t engage on the state level, many of the same rights we’re fighting to protect will be restricted at the local level anyway.”

Users visiting the site can choose categories and click on states to learn more about pending legislation. It has a guide for influencing lawmakers, directing people to ask for in-person meetings, present specific demands and track the progress of legislation. The site also suggests conducting protests in lawmakers’ offices to apply pressure and get their attention.

Black Lives Matter grew largely out of the protests over the 2014 fatal shooting of Michael Brown by a white police officer in Ferguson, Missouri. Activists DeRay Mckesson and Brittany Packnett — who met during Ferguson and co-founded Campaign Zero, a national campaign to end police violence — are behind the OurStates.org project and have created other online organizing tools to connect people to ways to continue the movement.

In the years since Brown’s death, Black Lives Matter groups have sprung up in cities across the country, organizing and challenging officials on the local level. But this latest effort is a 50-state strategy.

The imbalance of power gives state Republicans greater ability to shape laws as they pursue an agenda that includes proposals on abortion, unions, taxes, gun rights and school choice. In light of the Black Lives Matter movement, GOP lawmakers in several states want to crack down on protesters and challenge “sanctuary cities” that have resisted efforts to step up enforcement of immigration laws.

Black Lives Matter supporters are also being encouraged to back legislation in line with their personal agendas and that of the movement, including requiring police departments to report data on hate crimes, requiring officers to undergo bias training and preventing police unions from making it harder to investigate officer misconduct.

Republican strategist Brian Robinson said Black Lives Matter activists could make inroads with GOP lawmakers, depending on their approach. As potential areas of common ground, he pointed to legislation that would fund law enforcement training to deal with mental health crises or outfit officers with body cameras.

“If the goals are partisan, hot-button issues, the outcome is going to be … no political or policy progress,” said Robinson, former assistant chief of staff for Georgia Gov. Nathan Deal. “If Republicans are approached in a respectable manner on issues that could have bipartisan consensus, they can make headway, but they’ve got to be civil.

Activists must “be serious and have doable, incremental goals,” Robinson said. “If what they want to do is demonize Republican leaders … they’ll be ignored.”