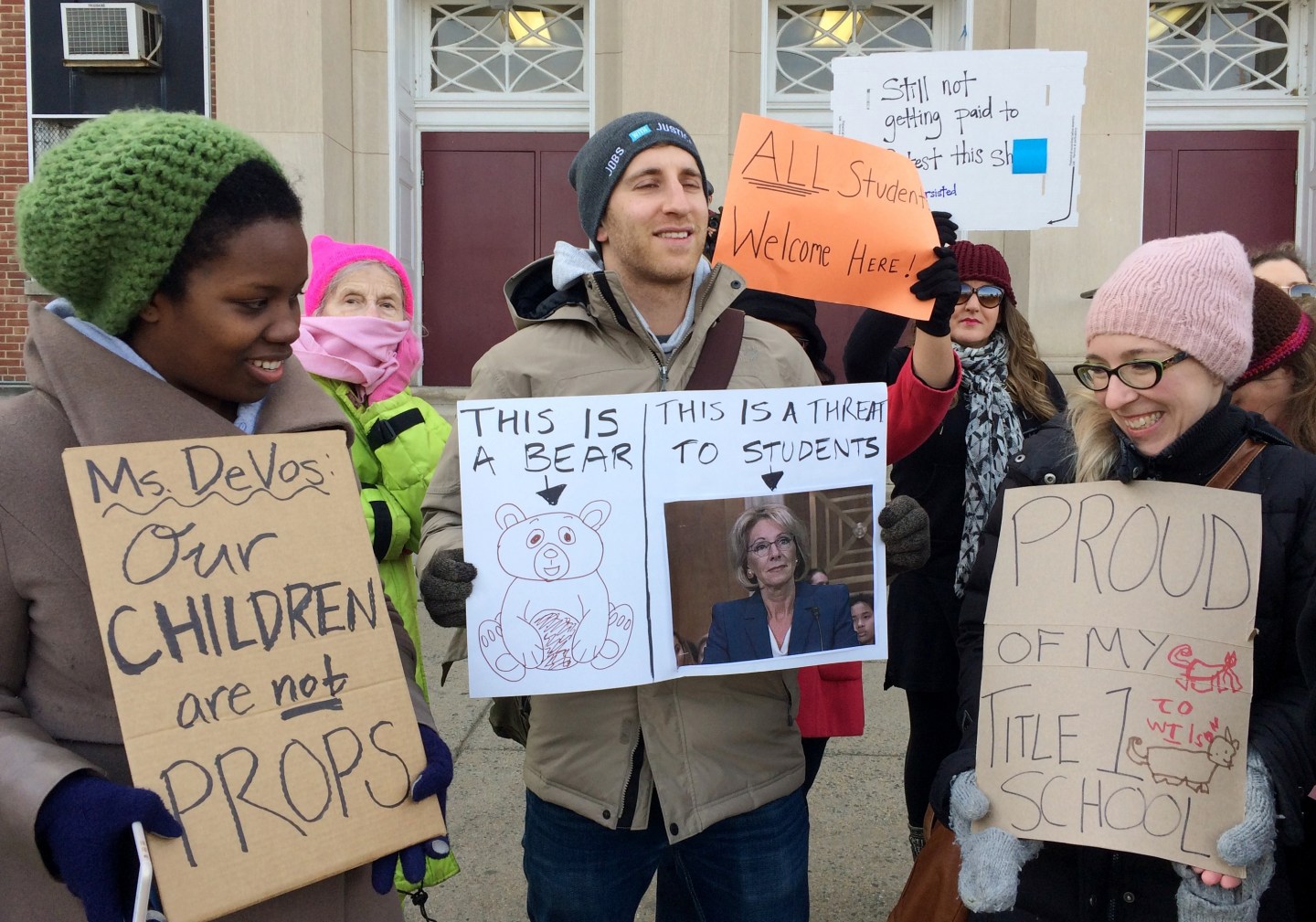 Education Secretary Betsy DeVos’ attempt to mend fences with teachers and parents across the country got off to a rocky start, when she was confronted by angry protesters during her first visit to a public school.

Several dozen activists gathered outside Jefferson Middle School in Washington, D.C., a predominantly African-American school, chanted “stand up, fight back.” Two protesters tried to block her way and one man was arrested.

DeVos, a wealthy Republican operative and promoter of charter and private schools, said she enjoyed touring the school, but warned her critics that they will not prevent her from doing her job.

“I respect peaceful protest, and I will not be deterred in executing the vital mission of the Department of Education,” DeVos said in a statement. “No school door in America will be blocked from those seeking to help our nation’s school children.”

DeVos, 59, spent more than two decades promoting charter schools and school voucher programs in her home state of Michigan and other states. She faced fierce opposition during the confirmation process from teachers unions who fear that she intends to defund traditional public schools. Two Republican senators from rural states that rely heavily on public schools opposed the nomination and Vice President Mike Pence had to cast a tie-breaking vote on Tuesday.

As DeVos tried to enter the school building Friday morning, two protesters physically blocked her way and one of them shouted, “Shame.” Visibly irritated, she retreated to her car, accompanied by an aide, but eventually she entered the school. Many teachers at the school wore black in a sign of resistance, according to a staff member.

Randi Weingarten, president of the American Federation of Teachers, one of the groups that vigorously opposed DeVos’ nomination, condemned the incident.

“Just heard a protester blocked & almost knocked Secy @BetsyDeVos down at Jefferson,” she wrote on Twitter. “We don’t condone such acts.”

Just heard a protester blocked & almost knocked Secy @BetsyDeVos down at Jefferson.We don't condone such acts.We want her to go to pub schls

D.C. Mayor Muriel Bowser also stressed on Twitter that protests should be peaceful. “We welcome Betsy DeVos & anyone who wants to learn more about our schools,” she wrote.

DeVos’ visit to the school was not announced by the Education Department and was closed to the media.

Jennifer Ibrahim, 34, a humanitarian worker, brought her toddler son in a stroller to the protest.

“I want to support our local public schools, make sure that everybody gets fair treatment under the system and I don’t feel like that’s where we are headed with our new education person,” Ibrahim said. “Charter schools aren’t necessarily better than public schools.”

Ari Schwartz, 26, a nonprofit worker, held a poster in which a picture of a teddy bear was juxtaposed with a photo of Devos. “This is a bear. This is a threat to students,” the caption read.

During her confirmation hearings, DeVos suggested that schools should have guns on campus to protect students against grizzly bears.

Public schools are “the foundation of our society, that’s how everybody learns what’s right and wrong,” Schwartz said. “We need to keep it that way.”

Elizabeth Davis, president of the Washington Teachers Union said teachers will continue to fight for good public education and hope DeVos will listen to them.

“We want quality public schools … for all of our children in every ZIP code in D.C.,” Davis told The Associated Press ahead of the protest. “We do not want to continue a trend of starving, punishing and closing our public schools to make way for privatization and more charter schools and vouchers.”

But former Education Secretary Arne Duncan, who served under President Barack Obama, tweeted, “Agree or disagree w @Betsy DeVos on any issue, but let’s all agree she really needs to be in public schools. Please let her in.”

Agree or disagree w @BetsyDeVos on any issue, but let's all agree she really needs to be in public schools. Please let her in.