Can Ferguson recover? The lasting economic impact of violent unrest 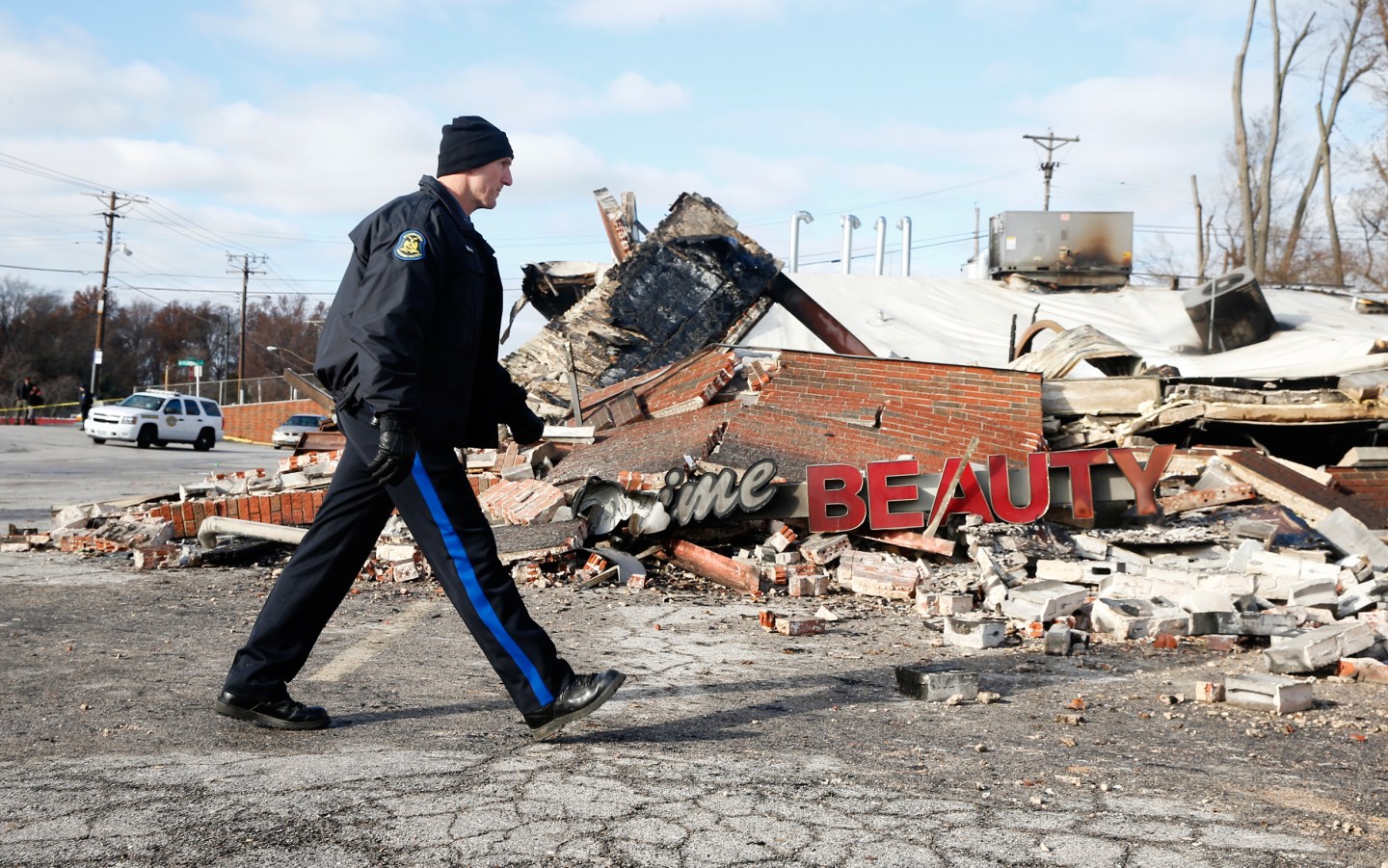 A police officer looks over the site of a building that was burned in riots the previous night in Ferguson, Missouri November 25, 2014. The St. Louis area braced for another day of protests on Tuesday after a grand jury cleared a white police officer in the fatal August shooting of an unarmed black teenager, sparking a night of violent and racially charged rioting.. REUTERS/Jim Young (UNITED STATES - Tags: CIVIL UNREST CRIME LAW) - RTR4FKK7
Photograph by Jim Young — Reuters

This post is in partnership with Money. The article below was originally published Money.com

A grand jury decision not to indict police officer Darren Wilson for the shooting of unarmed black teen Michael Brown has stoked anger in Ferguson, Mo., where peaceful protests have given way to looting and violence, virtually shutting down the city last night. “People don’t want to come into the area,” Jason Bryant, a local pastor, told TIME.

The events echo those in August, when the shooting first caused long-standing tensions to erupt into violence, theft — and shuttered storefronts. TIME reported last night that local retailers have seen sales slow by as much as 80%.

While the loss of local business may seem trivial next to the potential for additional violence — not to mention the civil rights and other legal issues at stake — there is a danger that rioting could disrupt the lives and livelihoods of Ferguson residents for years to come.

In the ten years after the 1992 Los Angeles riots, for example, the city lost nearly $4 billion in taxable sales, according to research conducted by Victor Matheson of College of the Holy Cross and Robert Baade of Lake Forest College.

“Social unrest can have a lasting negative impact on a local economy in a way that’s much more persistent than even a natural disaster,” says Matheson. “Though Hurricane Andrew caused more damage upfront, businesses were able to bounce back as soon as cleanup began. We didn’t see that in Los Angeles.”

Matheson and Baade found that the steps toward recovery are relatively clear after natural disasters: Communities tend to join together to build shelters, clean up, and storm-proof structures against future events. After rioting, by contrast, it’s much harder rebuild confidence and community trust among frightened business owners, or to convince new employers to move in. “It’s not as simple to just stamp out violence and anger,” Matheson says. And reluctance to rebuild is dangerous because it is self-perpetuating, he adds.

Concerns about lasting damage to business-owner confidence similarly followed riots in London in 2011 (also triggered by a police shooting), and economic aftershocks are still felt today, despite the commitment of more than $116 million in riot-recovery funding.

While there are no easy fixes that will keep Ferguson from suffering a similar fate, quelling anger is a first step. Various experts and commentators have suggested policy changes that could help rebuild trust in the police department, including a consent decree like the one that eventually helped the LAPD improve relations with residents of L.A.

No matter what path Ferguson takes, says Matheson, the sooner the violence ends, the faster the local economy can begin to heal.