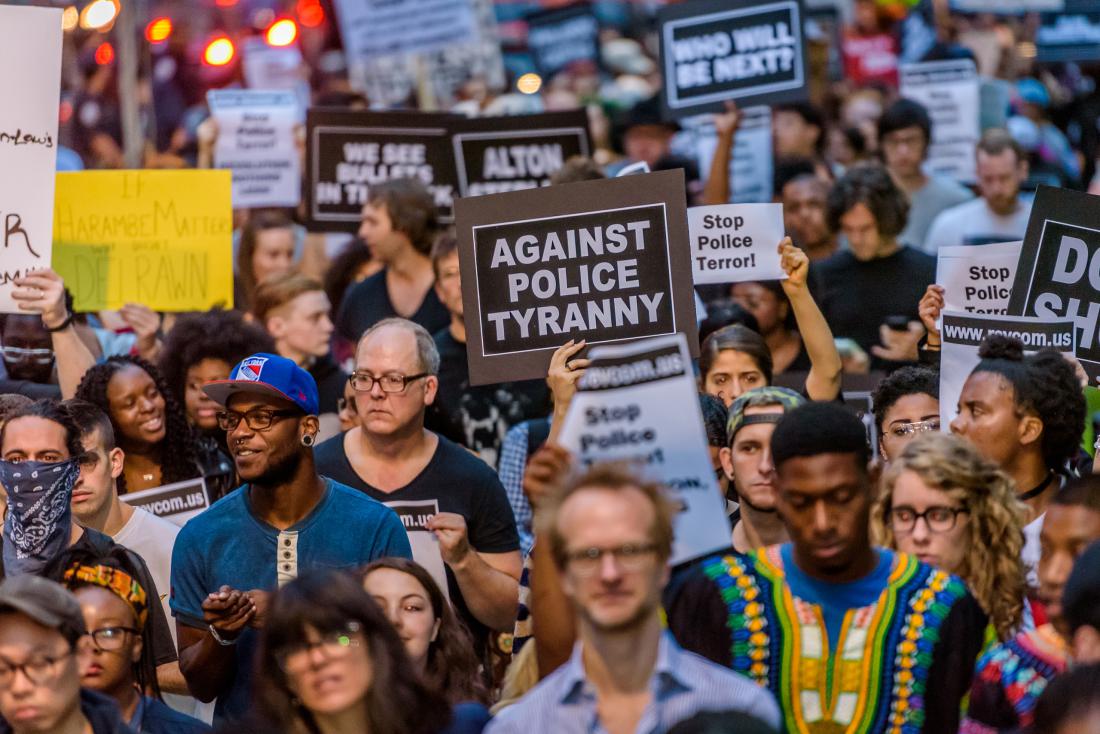 CITY HALL PARK, NEW YORK, UNITED STATES - 2016/07/09: For the third day in a row the Black Lives Matter movement took the streets of New York to protest police brutality in the aftermath of the release of the security camera video capturing the death of Delrawn Small contradicting the NYPD story spread on the media. An unconfirmed amount of arrests have been reported. (Photo by Erik McGregor/Pacific Press/LightRocket via Getty Images)
Erik McGregor — Pacific Press LightRocket via Getty Images

In the two years since Michael Brown was killed by a police officer in Ferguson, Mo., there have been dozens of Black Lives Matter demonstrations in nearly every city in the country.

But for many of the protesters who flooded the streets of downtown Manhattan Saturday night, this protest was their first.

“This is the new civil rights movement, and I wanted to be a part of it,” says Lotoya Francis, a 16-year old student at Polytechnic High School in Brooklyn. “Social media has made it so much easier to feel connected to the victims. We’re way more angry this time around.”

Francis and his friends came demonstrate for the first time on Saturday, horrified by the videotaped killings of Alton Sterling and Philando Castilelast week and undeterred by the violence against police officers at another protest in Dallas.

“I want to be more than just an internet activist,” explains Francis’s friend Bryce Edwards, 15.

Francis and Edwards joined hundreds of other protesters for a march through downtown Manhattan Saturday night, guarded by lines of police officers who formed a human barricade to protect and contain the demonstration. The New York City event was less eventful than other demonstrations this weekend, including the Baton Rouge protest where Black Lives Matter leader DeRay McKesson was arrested, and the protesters seemed largely respectful of the police officers on duty, especially in light of the shootings in Dallas.

But the killings of Sterling and Castile seemed to have electrified a new generation of Black Lives Matter protesters, including many teenagers who would have been too young to demonstrate when the movement first formed two years ago.

“It starts with one step, that’s how you get things done,”says Brian Buchanan, also 16, who wants to be an electrical engineer when he grows up. He condemns the violence in Dallas, but he’s concerned the outrage over the murder of the police officers will overshadow the outrage at what he sees as pervasive racial injustice. “The shooting in Dallas is a tragedy, but so is coming out of your own house and not feeling safe to walk down the street,” he says.

Buchanan was there with his sisters Bryanna, 21, and Accia, 13. They said this was their first protest because their parents hadn’t allowed them to come before. But this time was different. “I can’t worry every time he walks out the door that he won’t come home,” Bryanna says of her brother.

Employers Need to Discuss the Police Shootings of Black People

Other first-time demonstrators said they felt exhausted by what they saw as the endless stream of police killings. Many said they were joining the movement not out of excitement, but out of fatigue.

“I’m tired,” says Essence Dixon, 20. “I’m tired of wondering, what hate did you haven your heart that you had to kill that man?”

“I’m tired of seeing our people slaughtered all over town,” says her friend Xavier Brown, 19, also a student and first-time demonstrator. “If I don’t stand up, who will?”

“It hurts, rewatching those videos and knowing no conviction will happen,” says Equanna Hines, 20, who was there with Brown and Dixon. “It hurts, it makes you cry.”

And while every protester condemned the shootings in Dallas, many voiced concern that the attack would complicate the narrative, making it more difficult for Black Lives Matter activists to effectively condemn police violence. Others were angry that many Americans didn’t start paying attention to the violence until police officers were dying.

“It’s scary how that spoke to them vs. how many black people died,” says Hines. “We’ve had 5 cops and 500 black people.” She was referring to the Washington Post’s tally of police shooting deaths, which records all the people of any race shot and killed by police officers so far in 2016. So far, 511 have been killed.

“They had a decision to become a police officer,” says her friend Essence. “But I didn’t choose which skin color I have. Alton Sterling didn’t. And Philando Castile didn’t.”