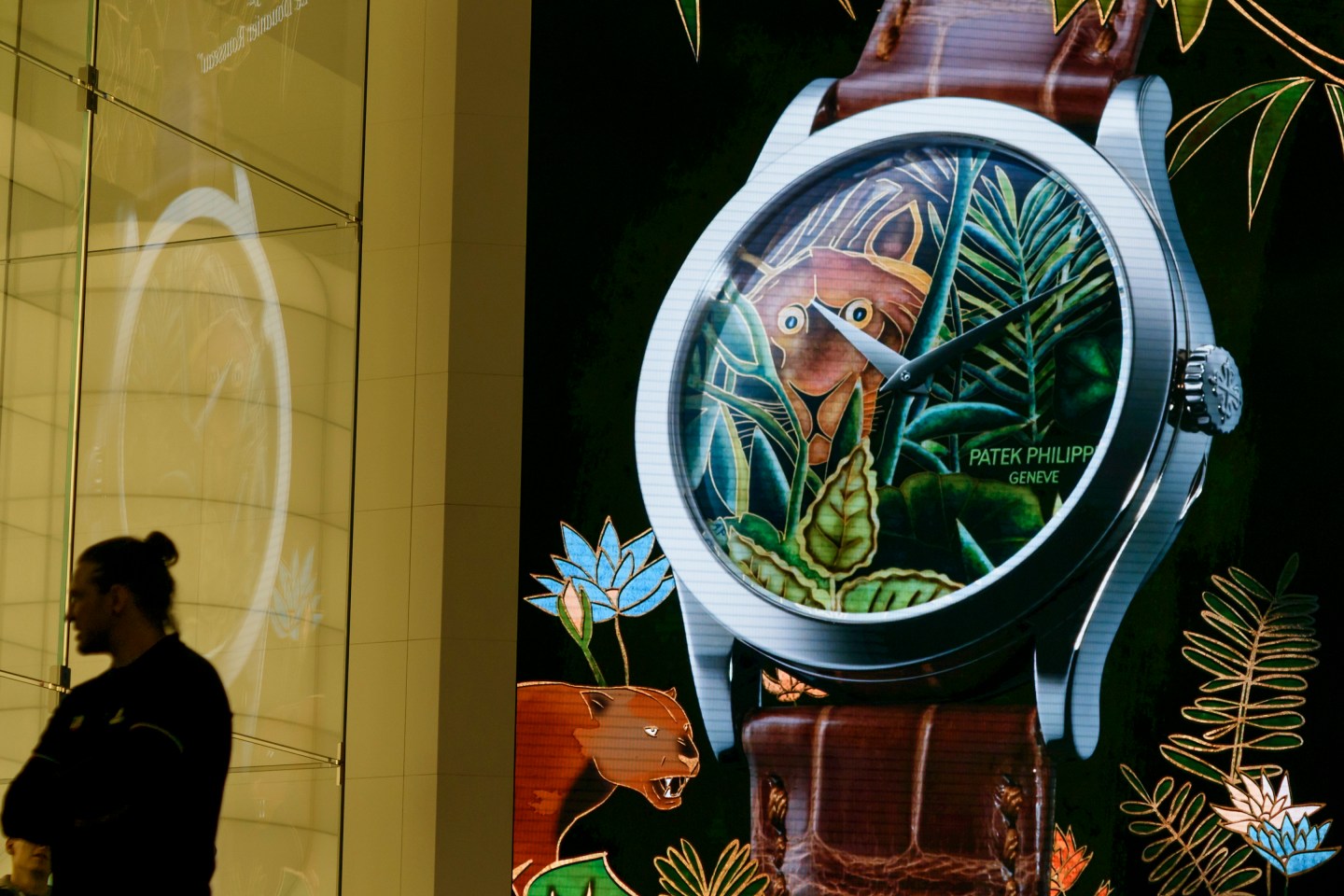 A watch is displayed on a giant screen at the stand of Swiss watchmaker Patek Philippe during the press day on the eve of the opening of the Baselworld watch and jewellery show on March 22, 2017 in Basel in Switzerland. The world's biggest watch fair will open in Switzerland this week, even as slumping exports of luxury Swiss timepieces appear to dash hopes of a market rebound. / AFP PHOTO / Fabrice COFFRINI (Photo credit should read FABRICE COFFRINI/AFP/Getty Images)
Photo credit: FABRICE COFFRINI AFP/Getty Images

Fossil Group wowed the watch world at a major trade show in Switzerland this week with the debut of new smartwatches in more than 300 styles across 14 of its brands.

The new timepieces to be rolled out over coming month include both full smartwatches with LED screens as well as more traditional, fixed face watches that have only a limited set of embedded smart features.

At a time when the entire smartwatch market remains in an early stage of development, with most consumers unsure even why they might want a computer on their wrist, Fossil still looks to have time to hone its strategy. No one was much interested at all in the segment until Apple arrived on the scene two years ago. Some of Fossil’s brands issued smart watches last year but the 2017 effort is far more extensive and coherent across the board.

Fossil didn’t reveal how much most of the new watches will cost beyond the $325 price for a new Diesel On model. Incorporating hardware from Qualcomm (QCOM) and Google’s (GOOGL) Android Wear 2.0 software, the new Diesel-branded watch looks like a fashion forward rival to smartwatches from Apple, Samsung, and other tech manufacturers. The Diesel and other full smartwatches from Fossil have considerably more style and flourishes than the sleeker, less decorative models from Apple or even other Android watches from LG, Huawei and the like.

And the new hybrid watches represent an higher level of fashion sense to differentiate them from the tech companies’ offerings. A new Tory Burch Collins hybrid smartwatch will feature a traditional watch face with an ivory background and blue and gold lettering. It will rely more on a linked smartphone and will have some smart features like step tracking and limited notifications. It will also run on a traditional watch battery that lasts for months and doesn’t need to be recharged nightly.

Fossil’s (FOSL) strategy for the entire new watch line, which also includes its other popular fashion brands like DKNY, Armani and Michael Kors, will challenge Apple and other tech companies by emphasizing its own strengths in design and style. The goal is to reduce the smarts to almost a commodity set of features, not the reason why a consumer might prefer one smartwatch over another. Relying on Google and Qualcomm means that the Fossil watches should be able to keep pace with all the latest tech developments while the company’s own designers focus on trends in fashion, picking the colors and materials and decorative patterns needed to make products winners in the marketplace.

That’s the same thinking that can be seen across many luxury watch brands like TAG Heuer, Movado, Guess, and Montblancat, which also all debuted new smartwatch products at the Swiss show this year.

It’s a far cry from just a few years ago, when the high-end watch market mostly mocked Apple and Samsung’s incursions rather than mimicked them by adding the same slew of smart features to their own devices.

“The watchmakers at Baselworld have shifted from complete dismissal to grudging — and occasionally whole-hearted — acceptance that smartwatches can no longer be ignored,” analyst Ben Wood at CCS Insight observed this week.

The estimated 22 million watches Apple (AAPL) has sold over the past two years, for example, disappointed Wall Street and is a drop in the bucket compared to the 3 billion smartphones sold worldwide over the same period, including over 400 million iPhones alone.

But watchmakers don’t operate in those lofty markets. The entire annual sales of Swiss made luxury watches is about $20 billion annually. And luxury smartwatches were not even a rounding error on that figure last year.

LVMH’s TAG Heuer says it sold 56,000 of its first line of smartwatches and aims to sell over 150,000 of its successor model. Even at a retail price of $1,500 that’s less than $250 million, or not even half of Apple’s average daily revenue last year.

And so their success or failure shouldn’t be measured by the same standards as the tech giants, either. If they can simply use the new technologies to get their own sales strongly growing again, that may be enough to declare a win.