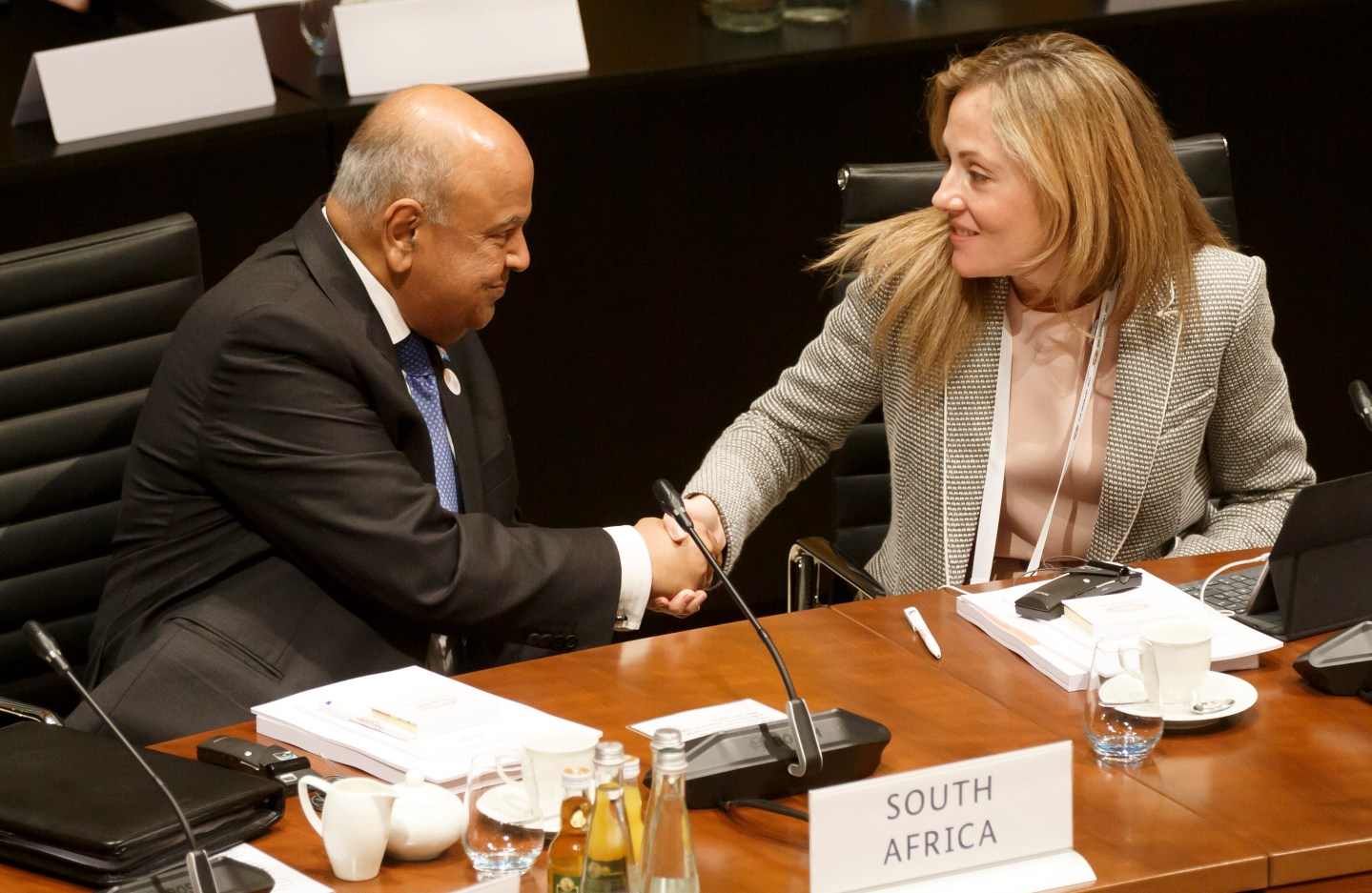 BADEN-BADEN, GERMANY - MARCH 17: Representative of Spain Emma Navarro shake hands to South Africa Finance Minister Pravin Jamnadas Gordhan in the convention center during the G20 Finance Ministers and Central Bank Governors meeting at the Kurhaus on March 17, 2017 in Baden Baden, Germany. The meeting of G20 Finance Ministers and Central Bank Governors will take place in Baden-Baden on the 17th to 18th of March and will be chaired by Germany. (Photo by Ronald Wittek - Pool /Getty Images)
Pool Getty Images

The world’s financial leaders adopted a list of principles on Saturday to boost the resilience of their economies against future shocks, including the advice to strengthen policy frameworks to reap the benefits of open markets.

“The risks for the global economy continue to persist of course, some even say they have rather increased,” German Finance Minister Wolfgang Schaeuble said on Saturday during a news conference at the end of the G20 meeting in Baden-Baden.

“This is why it’s all the more important that we are well prepared,” Schaeuble said, adding that strengthening the economic resilience against future shocks was one of the priorities of the German G20 presidency.

Schaeuble said the adopted list of principles included policy recommendations for example on labor market regulation, but also for international trade and the “importance of open markets.”

The adopted document, of which Reuters obtained a copy, is entitled “Note on Resilience Principles in G20 Economies.” The list is organized around five broad themes—real sector, public finance, private finance, monetary policy and external sector.

The list includes the advice to “strengthen macroeconomic foundations and policy frameworks to reap the benefits of openness to trade and international capital flows.”

It also calls on governments to “ensure that the benefits from trade are widely shared throughout the entire economy.”

In the section on public finances, it says governments should ensure that public debt is on a sustainable path taking into account “longer term structural fiscal pressures.”

In their main communique, the G20 countries dropped on a pledge to keep an open and inclusive global trade system after being unable to find a suitable compromise with an increasingly protectionist United States.

In an apparent reference to U.S. proposals to introduce a border tax to favor exports over imports, the separate document on resilience warns against negative spillover effects from individual policy actions.

The International Monetary Fund chief economist Maurice Obstfeld warned on Monday that U.S. proposals to overhaul the U.S. tax code by favoring exports over imports could have spillover effects to other economies such as Saudi Arabia as the measure was likely to strengthen the dollar.