Republicans Are in Disarray Over the CBO’s Trumpcare Report 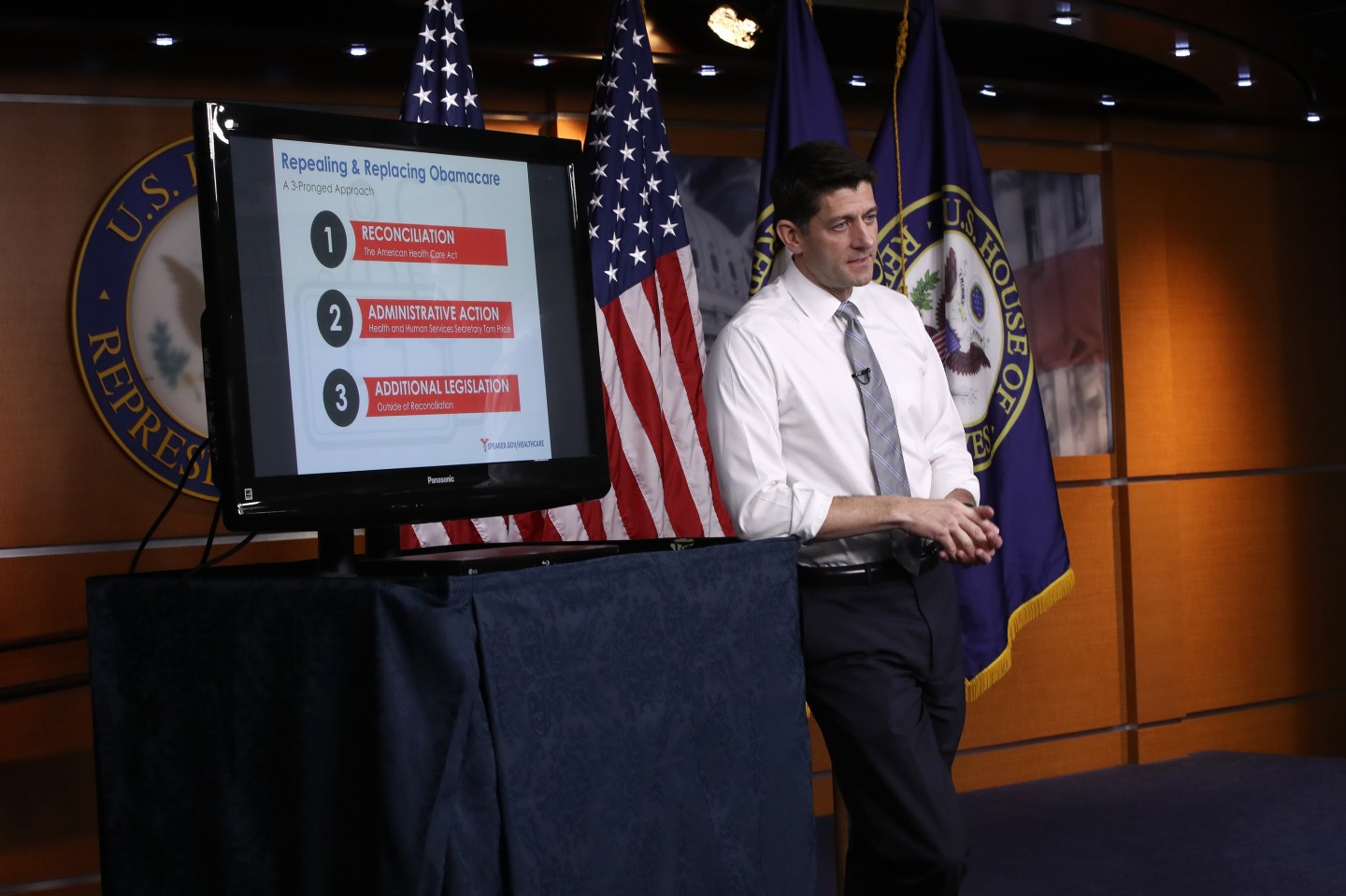 U.S. Speaker of the House Paul Ryan (R-WI) explains the Republican plan to replace the Affordable Care Act during his weekly press conference at the U.S. Capitol March 9, 2017 in Washington, DC. During his remarks, Ryan said ÒWe made a promise to repeal and replace Obamacare. Now itÕs time to do it.Ó (Photo by Win McNamee/Getty Images)
Win McNamee Getty Images

Just how bad is the new Congressional Budget Office (CBO) analysis of the GOP’s plan to replace Obamacare? Well, it depends on who you ask.

Since the analysis landed Monday afternoon, a flurry of media reports have focused on its projections that Trumpcare (officially the American Health Care Act), which is currently working its way through Congress, would lead to 24 million fewer insured Americans relative to current law in 2026 (and 14 million fewer by next year). But the White House, Congressional Republicans, and conservative media are all distinctly out-of-step on how to react to the scathing report. And it’s unclear how much it will affect House Speaker Paul Ryan’s ambitious goal of clearing a bill through his chamber prior to the April legislative recess.

The reaction to the CBO report fell along three basic line: 1) It’s incorrect; 2) It’s great news!; and 3) It’s a concerning analysis that signals a need for big changes to the legislation.

The White House, through Department of Health and Human Services (HHS) Secretary Tom Price, took the first tact. “The CBO report’s coverage numbers defy logic,” wrote Price in a statement, going on to cite specific examples of coverage losses he believes “do not translate to the real world.” Price also said that the analysis was unfair since it only considered part one of a “three-pronged” approach to dismantling Obamacare: the first being the main finances-oriented legislation going through legislative committees right now, and the second and third being “regulatory relief” from HHS and follow-on legislation to make other reforms to Obamacare. (Interesting historical note: Price helped get the current CBO director, Keith Hall, appointed to his position back when he was head of House Budget Committee and lavished praise on his analytical abilities at the time.)

White House press secretary Sean Spicer doubled down on the “three prongs” during a media briefing on Tuesday. So did Office of Management and Budget (OMB) director Mick Mulvaney during an appearance on MSNBC’s “Morning Joe.” “I don’t believe the facts are correct,” he said. “I’m not just saying that because it looks bad for my political position. I say that based upon a track record of the CBO being wrong before and we believe the CBO is wrong now.”

And then there was Paul Ryan, who had a…different take.

Note: That is an extremely generous view of the CBO’s analysis, which predicts widespread coverage losses and skyrocketing premiums over the next two years before some market stabilization in 2020 and beyond.

The rosy outlook drew skepticism from reliably conservative outlets, including Fox News, where anchor Bret Baier questioned how the analysis could be construed as anything but negative.

.@BretBaier: "Mr. Speaker, if you're encouraged by this CBO report, what's a CBO report you're discouraged by?" @SpeakerRyan explains. #AHCA pic.twitter.com/z9WqRORSmJ

Outlets typically allied with President Donald Trump used the CBO score to heap even more criticism on to the bill and Speaker Ryan. For instance, Breitbart, which doesn’t believe the AHCA is conservative enough, blared that “Ryancare” would cause 24 million people to lose coverage.

Other GOP leaders, such as Senate Finance Committee Chair Orrin Hatch, acknowledged that some of the effects projected by CBO were always inevitable. “We know that some are going to lose their coverage. There’s no way we can avoid that,” he said on Monday.

But that’s a pretty far cry from President Donald Trump’s bold promise of “insurance for everybody.”

Several GOP legislators openly acknowledged that the CBO report presents a challenge for Trumpcare going forward. “The CBO estimate that millions of Americans could lose their health insurance coverage if the House bill were to become law is cause for alarm. It should prompt the House to slow down and reconsider certain provisions of the bill,” said Maine Sen. Susan Collins in a statement.

“It’s awful, huh?” said Sen. Bill Cassidy of Louisiana in response to the CBO’s coverage projections. Collins and Cassidy have proposed their own health care reform legislation. “The bill’s likely to change in the House and again in the Senate,” added Missouri Sen. Roy Blunt.

Moderate and conservative senators alike have beefs with the AHCA, with some fearing that its massive cuts to Medicaid would be a disaster for constituents while others say it’s simply another entitlement program wrapped in a Republican package.