Sprint Shows Off Super-Fast Phone You Can’t Buy Yet 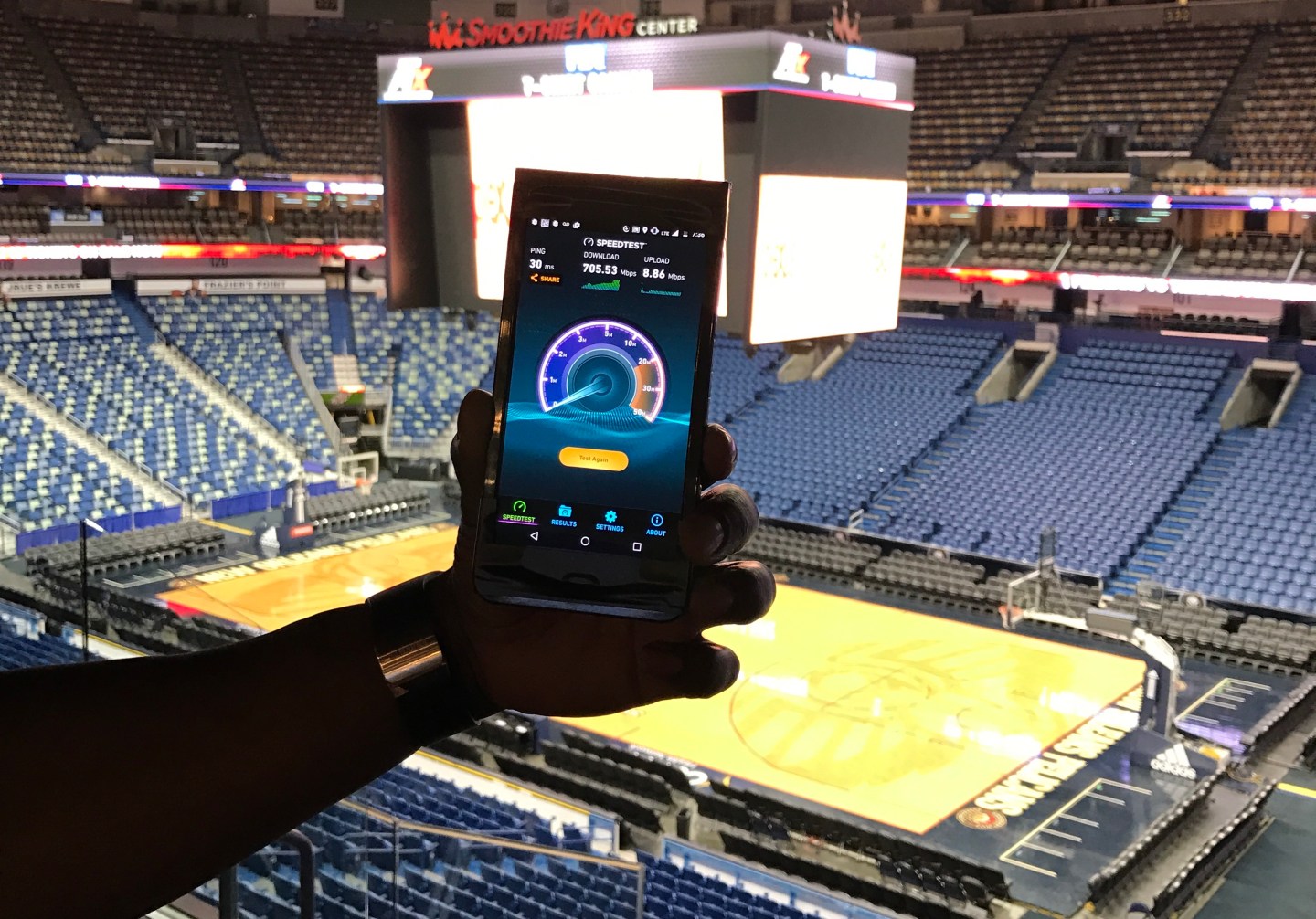 Sprint demonstrated techniques it is using to speed smartphone downloads to near-gigabit speeds, but isn’t yet able to offer a compatible device for sale.

Using a pre-release Lenovo Motorola model that it didn’t identify, Sprint achieved download rates of over 705 megabits per second in the Smoothie King Center in New Orleans before an NBA basketball game on Wednesday night. That speed is 10 to 20 times faster than the speed of typical 4G LTE downloads and quick enough to grab a high-definition digital movie file in under a minute. The demonstration relied on new technologies included both in the phone and in a cell site transmitter.

In January, T-Mobile (TMUS) and Ericsson (ERIC) used another unidentified phone to demonstrate download speeds of 979 megabits per second in a laboratory setting. The carrier has promised to be first to deploy gigabit speed equipment for customers. And AT&T (T) has said it will hit the mark at some of its cell sites later this year.

The moves to raise speeds on current 4G LTE networks come as the carriers face several years of delay and technological hurdles in rolling out the next generation of wireless technology, known as 5G, which can reach multi-gigabit per second speeds. Faster speeds will open the way to new applications like highly realistic virtual reality programs, but also may tax the carriers’ network capacity. And customers in the real world are unlikely to reach the very top speeds unless they are quite close to an uncongested cell transmitter.

The unnamed “forthcoming flagship smartphone” from Motorola used in the demo is coming out later this year. It contains Qualcomm’s new Snapdragon 835 chips set and X16 modem, which are compatible with the Category 16 LTE standard needed to reach gigabit download speeds, Sprint said. Sprint’s cell transmitter also used a technique to communicate over multiple airwave pathways at once called 4X4 MIMO and a method of packing in more data known as 256-QAM higher order modulation.

Consumers will be waiting a while before getting access to the new, super-high speeds, however. Last year’s top phones, like some versions of the iPhone 7, use the older Qualcomm X12 modem chip released in 2015, which has a top download speed of 600 Mbps under the LTE Category 12 standard.

No smartphones currently for sale include the Qualcomm chips needed to reach category 16 speeds. Sony (SNE) has showed off its new Xperia XZ Premium model, coming in the Spring, which does have the necessary parts but won’t run on Sprint’s (S) network. Samsung is widely rumored to be including the latest Qualcomm chips in its upcoming Galaxy S8 model being unveiled at the end of the month.

Motorola didn’t immediately respond to a request for comment about the phone used in the Sprint demonstration. The new mid-range G5 models that the company unveiled at the Mobile World Congress last month in Barcelona contain older Qualcomm chipsets that don’t support gigabit speeds.

Apple (AAPL) doesn’t use Qualcomm’s (QCOM) processing chips, like the Snapdragon 835 in the iPhone, preferring to go with its own A-line of proprietary chips. But it has used Qualcomm modem chips, so a future gigabit-capable iPhone model is possible.