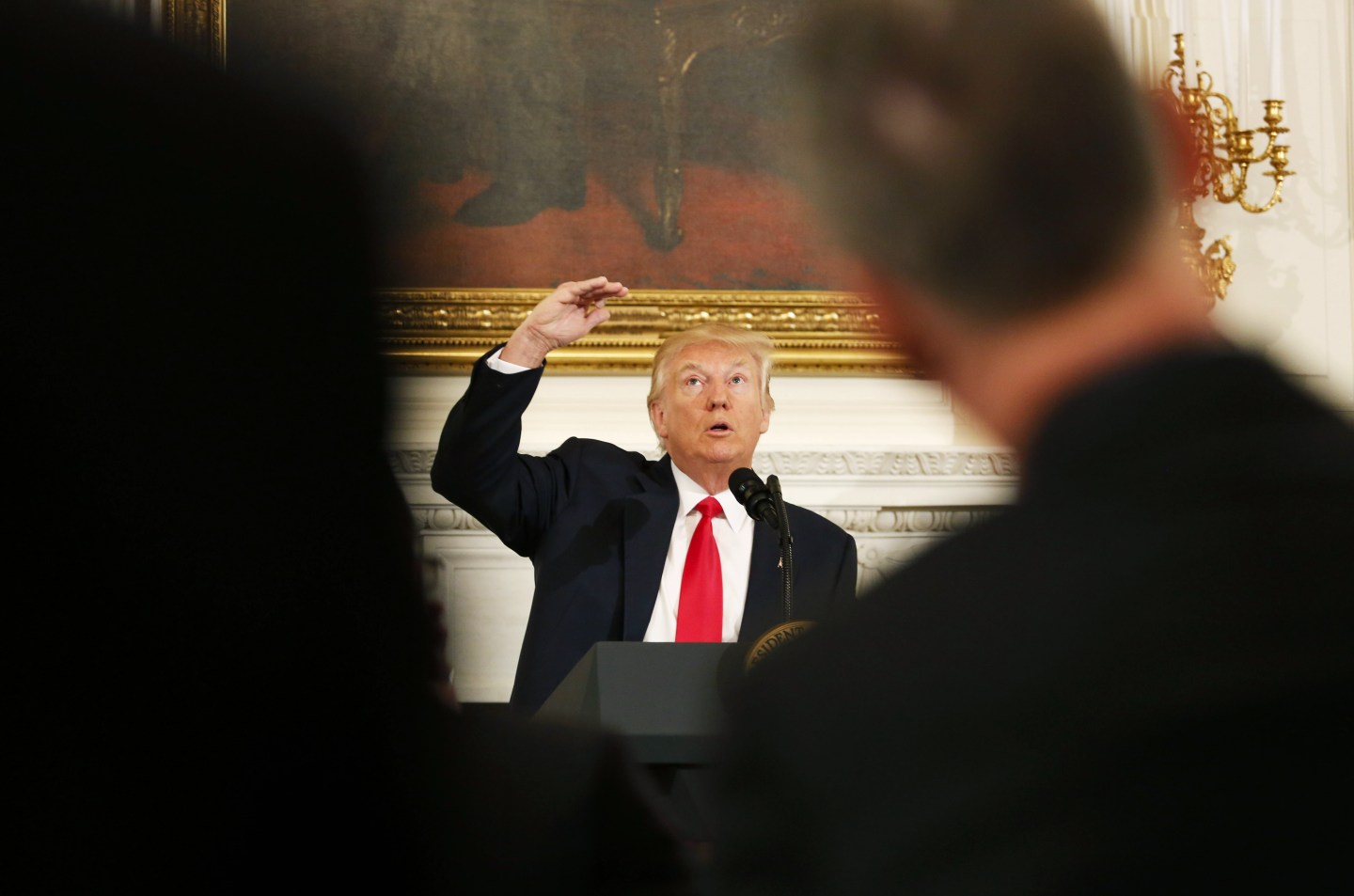 U.S. President Donald Trump speaks at the National Governors Association meeting in the State Dining Room of the White House in Washington, D.C., on Monday, Feb. 27, 2017. Trump will propose boosting defense spending by $54 billion in his first budget plan and offset that by an equal amount cut from the rest of the governments discretionary budget, according to administration officials. Photographer: Aude Guerrucci/Pool via Bloomberg
Photograph by Aude Guerrucci—Bloomberg via Getty Images

President Dwight Eisenhower said in 1960 that the U.S. should spend as much as necessary on defense, but not one penny more. Before Congress approves the massive 10% increase in defense spending proposed by President Donald Trump—which will be offset by slashing the budgets of the State Department and Environmental Protection Agency, as well as killing several domestic programs—the legislative body must be able to explain why current spending levels are insufficient.

Even a cursory look at our national security spending will show that they are not. The U.S. by itself spends more on defense than the next seven highest-spending nations in the world combined.

Regardless, no matter how much the U.S. or any nation spends on defense, it cannot buy perfect security. Whatever level of funding we provide for national security is not as important as having the appropriate strategy to deal with the current challenges facing the nation. Spending large sums of money to deal with threats from a bygone era like the Cold War, for instance, will not enhance national security. While Russia has rebuilt its military somewhat, it is nowhere near as capable as that of the former Soviet Union. In fact, Russia’s total defense budget is less than $50 billion. Just as the sequester is a non-strategic and unwise way to limit a budget, increased funding that is not connected to a sound defensive strategy for the demands we face today will be non-strategic, wasteful, and do more harm than good.

Proponents of increased Pentagon spending argue that our military is not prepared to deal with current threats and that the defense budget is not receiving a large enough share of the nation’s gross domestic product. While it is true that defense spending compared to GDP dropped over the Obama presidency, the economy has grown—a lot. A lower ratio of spending to GDP is not an accurate representation of the readiness of our military to respond to threats posed by terrorist groups like ISIS, as well as states like Russia, China, North Korea, and Iran. In a recent article in Foreign Affairs, Gen. David Petraeus and the Brookings Institution’s Michael O’Hanlon make clear that the current state of U.S. armed forces is “awesome,” they are not facing a readiness crisis, and the current level of defense spending on the readiness portions of the defense budget and procurement is more than adequate.

Read more: Why Trump’s Military Buildup Is Not As Big As He Promises

Even with the limits placed upon the Pentagon under the 2011 Budget Control Act (BCA), the amount of funding for defense in the National Defense Authorization Act (NDAA) recently signed by Obama amounts to more in real terms than the U.S. spent on average in the Cold War and also more than was spent at the height of the Reagan defense buildup. This amount is three times more than our nearest competitor, the Chinese, will spend this year, and accounts for more than one-third of the world’s total military expenditures. Even the BCA hasn’t hamstrung defense spending, as large amounts of the war budget, which is exempt from BCA rules, have been used for enduring programs not associated with any war.

While the defense budget is the most conspicuous dollar amount associated with national security, it is in no way the only federal agency working to keep America safe. The State Department and the U.S. Agency for International Development (USAID), for example, both play vital roles in protecting the country. State Department diplomats forge relationships and bonds of trust with U.S. allies and potential adversaries, while USAID provides humanitarian and development assistance that saves and improves the lives of millions of people around the globe. As Defense Secretary James Mattis has noted, not fully funding these areas makes new wars and conflicts more likely. Each of these face steep cuts in order to increase the defense budget. If the government provides so much of its limited resources to the Pentagon that it cannot fund these agencies adequately, U.S. national security will suffer.

Nor does America have to use military power as a first resort. Whether it is dealing with Russia, China, North Korea, Iran, or ISIS, the U.S. can and should work effectively with allies and partners. The U.S.-led 60-nation coalition fighting ISIS, the buildup of military forces by NATO allies to combat aggressive moves by Russia, and the economic sanctions the U.S. and European Union placed on Russia after its annexation of Ukraine are examples of leveraging all the instruments of American power and the contributions of allies to protect national security.

It is true that despite the many contributions of U.S. allies, both Republican and Democrat secretaries of defense like Robert Gates, Leon Panetta, and Chuck Hagel have all expressed dismay about inadequate defense spending by our partners. But that kind of behavior is enabled by profligate U.S. defense spending. America needs to spend wisely as it calls on friends to honor their side of the common security bargain.

Finally, the U.S. cannot be strong abroad if it is not strong at home. As Eisenhower realized, a strong domestic economy is the basis for military might abroad. Therefore, running up large deficits or not providing adequate funds for education, health, or infrastructure—as a result of providing too much of America’s limited resources for defense—will have a negative impact on national security.

Lawrence J. Korb is a senior fellow at the Center for American Progress. He served as assistant secretary of defense during the Reagan administration.