Storm-lashed California Roads, Dams Could Cost One Billion to Fix 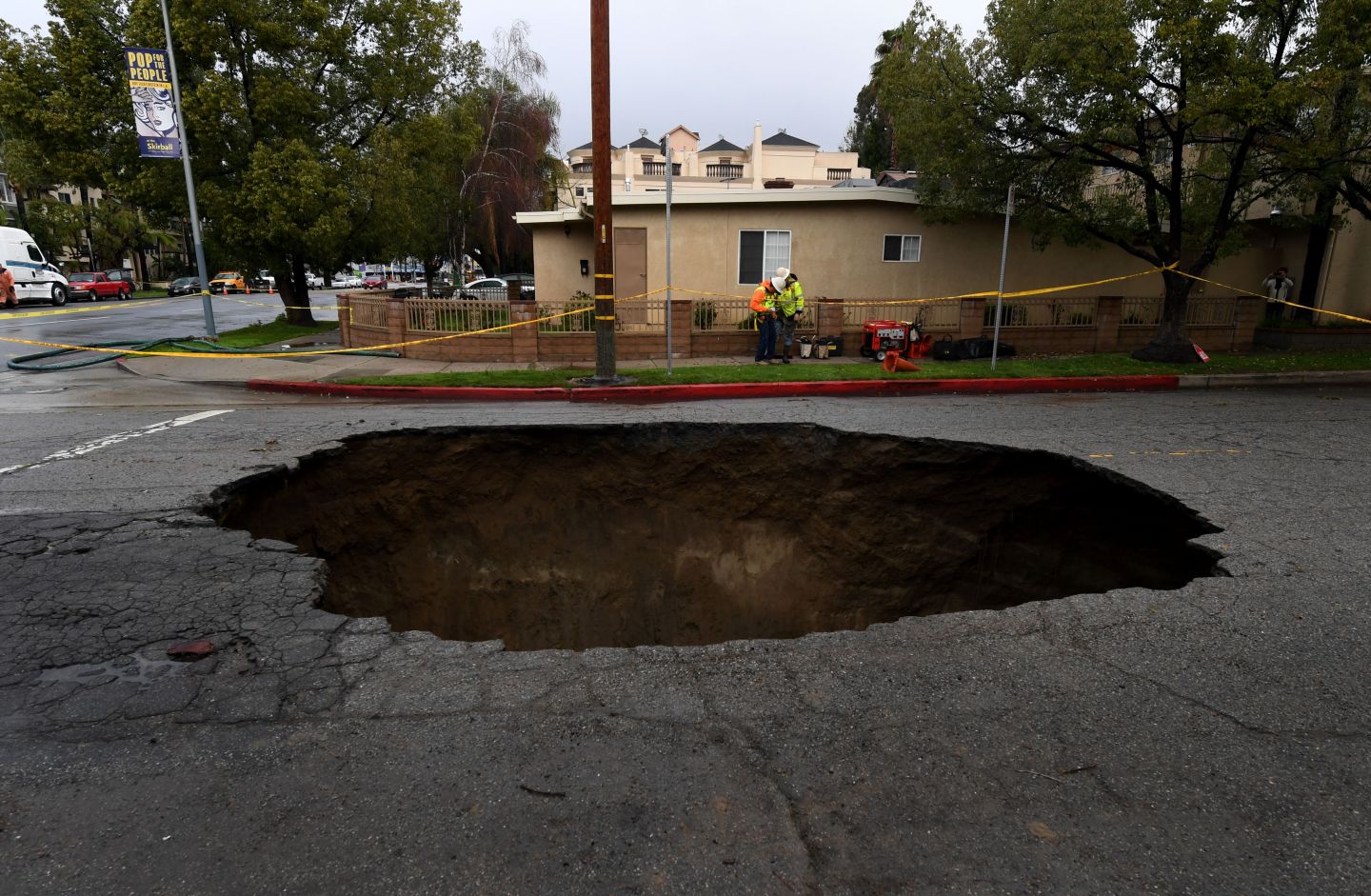 A large 20-foot-deep (6-meter) sinkhole that swallowed two vehicles in North Laurel Canyon Blvd, in Los Angeles, is cordoned-off on February 18, 2017, after a powerful storm hit southern California. The storm blew in from the Pacific Ocean, hitting California on February 17 with high winds, heavy rain that downed power lines, leaving 60,000 people in the Los Angeles area without power, and prompting hundreds of flight delays and cancellations at airports. Four people have been reported killed due to the storm. / AFP / Mark RALSTON (Photo credit should read MARK RALSTON/AFP/Getty Images)
MARK RALSTON AFP/Getty Images

The bill to repair California’s crumbling roads, dams and other critical infrastructure hammered by an onslaught of storms this winter could top $1 billion, including nearly $600 million alone for damaged roadways that more than doubles what the state budgeted for road repair emergencies, officials said Friday.

Adding to the problems, many communities have drained their emergency budgets and are looking to the state and federal government for help. But on top of the latest damage, the nation’s most populated state is struggling with a $6 billion annual backlog of repairs for roads, highways and bridges that leaders can’t agree on a way to fund.

Winter storms have dumped enough rain and snow on the northern part of the state to end a five-year drought. But with the wet weather, comes a host of problems for crumbling infrastructure.

A section of mountain highway between Sacramento and South Lake Tahoe has buckled, with repairs estimated to cost $6.5 million. In the Yosemite Valley, only one of three main routes into the national park’s major attraction is open because of damage or fear the roads could give out from cracks and seeping water, rangers said.

On central California’s rain-soaked coast, a bridge in Big Sur has crumbled beyond repair, blocking passage on the north-south Highway 1 through the tourist destination for up to a year. Until it is rebuilt, visitors can drive up to view the rugged coastline, then turn back.

The total cost for responding to flooding, storm damage and repairs statewide in the first two months of 2017 will probably exceed $1 billion, Gov. Jerry Brown’s finance director, Michael Cohen, said Friday. Much of it will be covered by the federal government, which is helping the state recover from severe storms, he said.

Oroville Dam Disaster Is a Wake-Up Call for Infrastructure

The tally includes $595 million to clean up mudslides and repair state highways. Costs for evacuations and non-highway damage, as well as for repairs at Oroville Dam, whose spillways threatened to collapse and flood communities downstream, have not been precisely tallied, he said.

Early estimates put the fixes at the nation’s tallest dam as high as $200 million.

The California Department of Transportation, which is responsible for maintaining highways, roads and overpasses, has a reserve fund of $250 million that’s far short of what it would cost to fix recent storm damage.

“This is for 2017,” Caltrans spokeswoman Vanessa Wiseman said. “So, essentially we’re talking only two months.”

GE, Intel, and AT&T Are Putting Cameras and Sensors All Over San Diego

Storms across the state have wrecked more than 350 roads, shutting down traffic on at least 35 that await rebuilding or shoring up of stretches that washed out, sunk or got covered in mud and rocks, officials said.

To cover the shortfall for emergency repairs, Caltrans will ask for more money next month from an appointed board that allocates state cash for road projects, Wiseman said.

Aside from emergency road repairs, Gov. Brown said Friday that California has $187 billion in unmet needs for water and transportation infrastructure. He suggested tax increases may be required, but he wasn’t prepared to offer “the full answer” to raising enough money to shore up infrastructure.

That’s bad news for local communities hardest hit by the storms. They say rebuilding will cost millions of dollars they don’t have.

In San Jose, where storm flooding forced 14,000 residents from their homes this week, officials say they have not yet calculated the cost of the damage. Some people have not even returned home yet.

Dennis Schmidt, Butte County’s public works director, said storms that led to the emergency at Oroville Dam tore out two roads and left potholes that will cost more than $1 million to repair. He said that will wipe out the county’s emergency budget.

“I’m looking out the window, and it’s blue skies and sunny,” Schmidt said. “We need it for a couple days to get out and patch some potholes. Our residents will greatly appreciate that.”