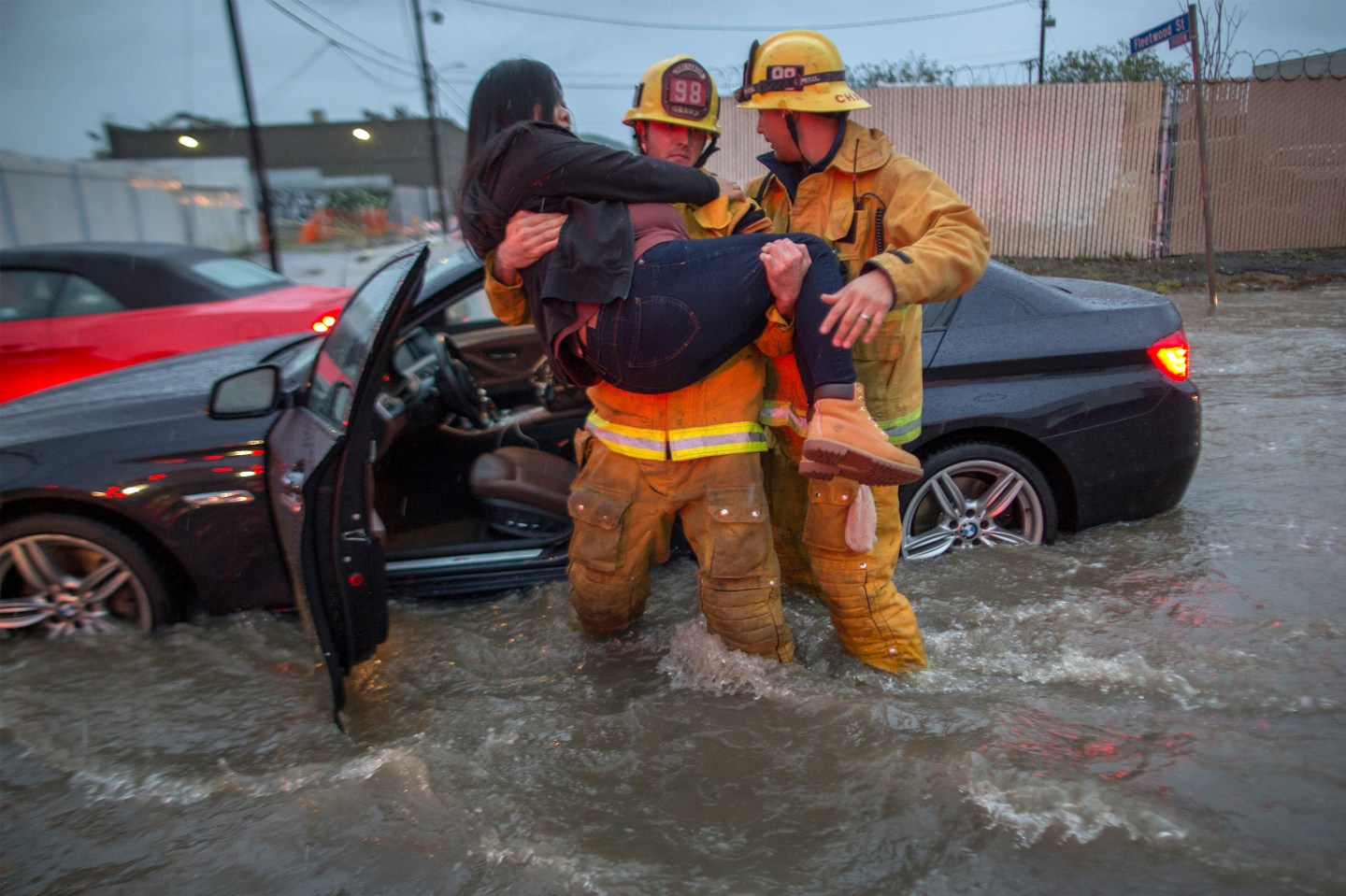 SUN VALLEY, CA - FEBRUARY 17: A firefighter carries a woman from her car after it was caught in street flooding as a powerful storm moves across Southern California on February 17, 2017 in Sun Valley, California. After years of severe drought, heavy winter rains have come to the state, and with them, the issuance of flash flood watches in Santa Barbara, Ventura and Los Angeles counties, and the evacuation of hundreds of residents from Duarte, California for fear of flash flooding from areas denuded by a wildfire last year. (Photo by David McNew/Getty Images)
David McNew Getty Images

The Los Angeles Fire Department said within four hours on Friday afternoon it responded to 150 reports of downed wires, one of which led to a fatality.

Another person was found dead in a submerged vehicle in Victorville, about 100 miles east of Los Angeles, fire officials said on Twitter.

Los Angeles area utilities said power was out for more than 100,000 customers in the region.

The severe storm could bring California’s heaviest rainfall in six years, after months of wet weather that has dramatically eased California’s years-long drought. The heavy rain and melting snowpack threatened to undermine a spillway at one of the largest dams in the country, which prompted the evacuation of 188,000 residents earlier this week.

The city of Duarte, about 20 miles (32 km) east of Los Angeles, said it ordered residents of 180 homes to evacuate given the potential for mudslides.

A forest fire charred an area above their homes last year, prompting concerns that heavy rain could trigger mudslides where there is no vegetation.

Alberto Moreno, 34, piled sandbags outside his home on Friday after refusing to leave the area.

“The neighbors are here so we’re all basically going to help out each other if it comes down to it,” Moreno said.

Heather Malone, 44, another Duarte resident, said she was prepared to escape by car if she saw “half the mountain coming down” near her home.

The downpours in other heavily populated areas of Southern California, including parts of Santa Barbara and Ventura counties also recently hit by wildfires, could create the risk of mud and debris flows there too, the weather service said.

Authorities have warned residents of an area west of Santa Barbara, where another wildfire ravaged vegetation last year, to prepare to leave their homes quickly if ordered to evacuate.

Rain also battered parts of Northern California and southern Oregon and the weather service had flood warnings in effect in both regions on Friday afternoon.

In higher areas of eastern California and western Nevada, as much as 2 feet (60 cm) of snow could cause whiteouts, forecasters said.

Southwest Airlines Co said it had canceled more than 250 flights in California, as the storm caused disruptions.

Airports in Los Angeles, San Francisco and other parts of California had dozens of canceled or delayed flights, according to tracking website FlightAware.com.