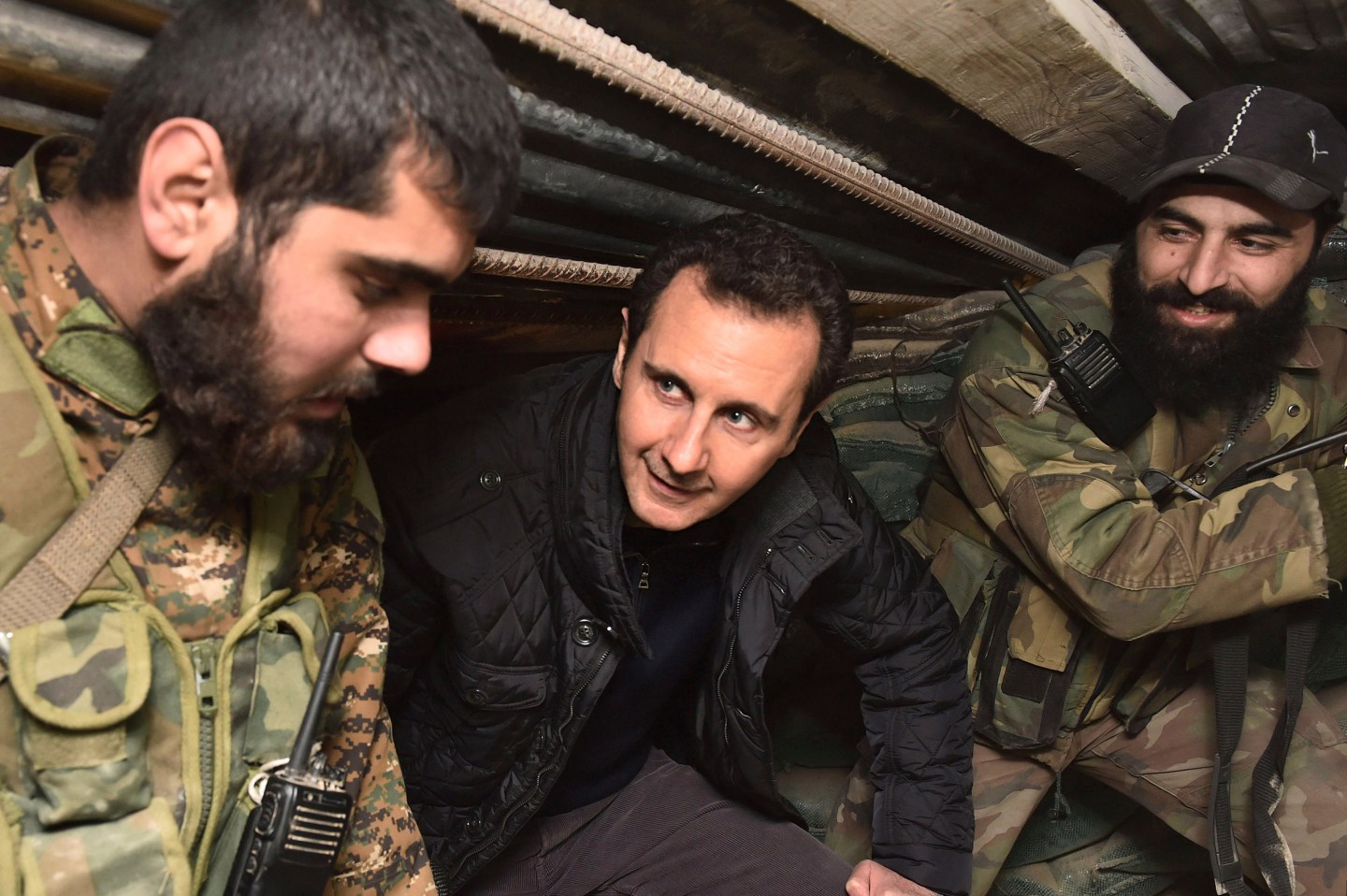 Syrian President Bashar al-Assad (C) talks to soldiers during a visit to Jobar, northeast of Damascus, in this handout photograph distributed by Syria's national news agency SANA on January 1, 2015. Al-Assad visited a district on the outskirts of Damascus and thanked soldiers fighting "in the face of terrorism", his office said on its Twitter account on Wednesday, posting pictures of the rare trip. The account said the visit took place in Jobar, northeast of Damascus, on the occasion of the New Year. The district came under heavy Syrian air force strikes on Wednesday according to the Britain-based Syrian Observatory for Human Rights, which monitors the nearly four-year conflict. REUTERS/SANA/Handout (SYRIA - Tags: CIVIL UNREST POLITICS RELIGION CONFLICT TPX IMAGES OF THE DAY) ATTENTION EDITORS - THIS PICTURE WAS PROVIDED BY A THIRD PARTY. REUTERS IS UNABLE TO INDEPENDENTLY VERIFY THE AUTHENTICITY, CONTENT, LOCATION OR DATE OF THIS IMAGE. FOR EDITORIAL USE ONLY. NOT FOR SALE FOR MARKETING OR ADVERTISING CAMPAIGNS - RTR4JT61
Photograph by Sana Sana — Reuters

Syria’s President Bashar al-Assad said President Donald Trump’s ban on Syrians entering the United States targeted terrorists, not the Syrian people, appearing to defend the logic of the measure in an interview broadcast on Thursday.

Trump last month issued an executive order, since suspended by a U.S. district judge, that temporarily barred travelers from seven mostly Muslim countries including Syria, as well as imposing an indefinite ban on all Syrian refugees.

“It’s against the terrorists that would infiltrate some of the immigrants to the West. And that happened. It happened in Europe, mainly in Germany,” Assad said in the interview with Europe 1 radio and TF1 television which was recorded on Tuesday in English.

“I think the aim of Trump is to prevent those people from coming.” It was “not against the Syrian people”, he said.

Trump said his order, which triggered protests at home and abroad and confusion at U.S. and international airports, was intended to prevent militants from entering the United States. His administration is challenging the suspension ruling, which was upheld last week by appeal court judges.

Assad’s government has often criticized Western states for their support for Syrian rebel groups, all of which are regarded by Damascus as terrorists, and has warned that such backing will lead to militant attacks around the world.

Trump has not yet set out a clear policy on Syria but has indicated he could cut U.S. support for insurgent groups and has said he wants to mend ties with Russia, whose President Vladimir Putin is Assad’s strongest international ally.

Asked directly whether Trump’s immigration policy was the right one, Assad did not answer. He also said he had not yet seen what Trump’s Syria policy would be.