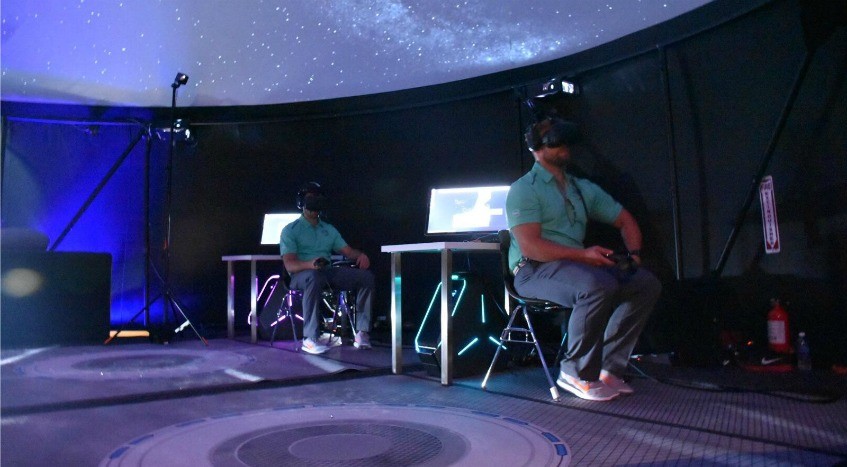 A CEO at one the biggest video game companies in the world is comfortable with virtual reality failing.

Gabe Newell, the CEO of video game developer Valve, said in an interview with gaming news site Polygon this week that while he’s optimistic about the immersive technology, he’s “pretty comfortable with the idea that it will turn out to be a complete failure.”

Newell’s comments are noteworthy considering Valve is the software partner of Taiwanese smartphone maker HTC and its Vive virtual reality headset. Although Valve, a private company, derives the bulk of its revenue from its Steam video game distribution service, the company is heavily investing in VR. The company counts around 1,300 VR apps on its Steam service, according to Polygon.

The general consensus from several analysts and VR research firms that track sales of headsets like the Vive and Facebook’s (FB) Oculus Rift is that VR is still in its infant stage. Despite a wave of hype surrounding VR prior to the high-profile debuts of the Vive and Rift headsets in 2016, not nearly as many people have bought the high-priced headsets as some firms originally projected.

Bulky and unfashionable headsets that require beefy computers to operate are just a few of the reasons why mainstream consumers haven’t gravitated to the technology, although some hardcore gamers and enthusiasts still find them compelling. The Polygon report states that Valve has only made $250,000 per each of the top 30 VR apps on its Steam service, which is well below the millions of dollars a traditional blockbuster game can produce for the company.

“If you don’t try things that don’t fail you probably aren’t trying to do anything very interesting,” Newell said. “So we hope that we’ll find stuff that gamers will say is awesome and is a huge leap forward.”

Newell seemed to have called out Facebook during the interview on the social network’s original projections on sales of VR headsets. Facebook CEO Mark Zuckerberg said in 2014 that the company would have to sell 50 million to 100 million VR headsets before he considers the tech to have a meaningful impact as a new way of computing.

“Some people have got attention by going out and saying there’ll be millions of [VR unit sales] and we’re like, wow, I don’t think so,” Newell said. “I can’t point to a single piece of content that would cause millions of people to justify changing their home computing.”

For Newell, one of the biggest obstacles facing VR are current technical limitations that currently produce lower-quality visuals compared to bleeding-edge conventional video games. Although VR games are certainly more immersive than 2-D games in that people can battle aliens in 3D digital environments, the resolutions in VR games are significantly lower than in conventional games—resulting in duller and less colorful visuals.

Even if the price of headsets fall from their current $700-$800 price for headsets like the Rift and Vive, the lack of available and engaging content shows that “there’s still not a really incredibly compelling reason for people to spend 20 hours a day in VR,” Newell said.

Still, Newell is excited about VR—once the technology improves and developers create more compelling games and apps. He estimates that by 2018 or 2019, VR games could see “incredibly high resolutions.”

The state of virtual reality is akin to the rise of PCs in the early 1980’s, when few people beyond technologists thought computers could be useful for multiple tasks like spreadsheets and other business applications, he said.

And just because mainstream consumers don’t yet see the appeal of VR, developers seem to be loving it, despite not making much money on sales of their apps, Newell said. These developers will be crucial for creating the games and apps that could one day be that breakout hit with consumers the VR industry needs.

“There’s nobody who works in VR saying, ‘Oh, I’m bored with this,’” said Newell. “Everybody comes back.”