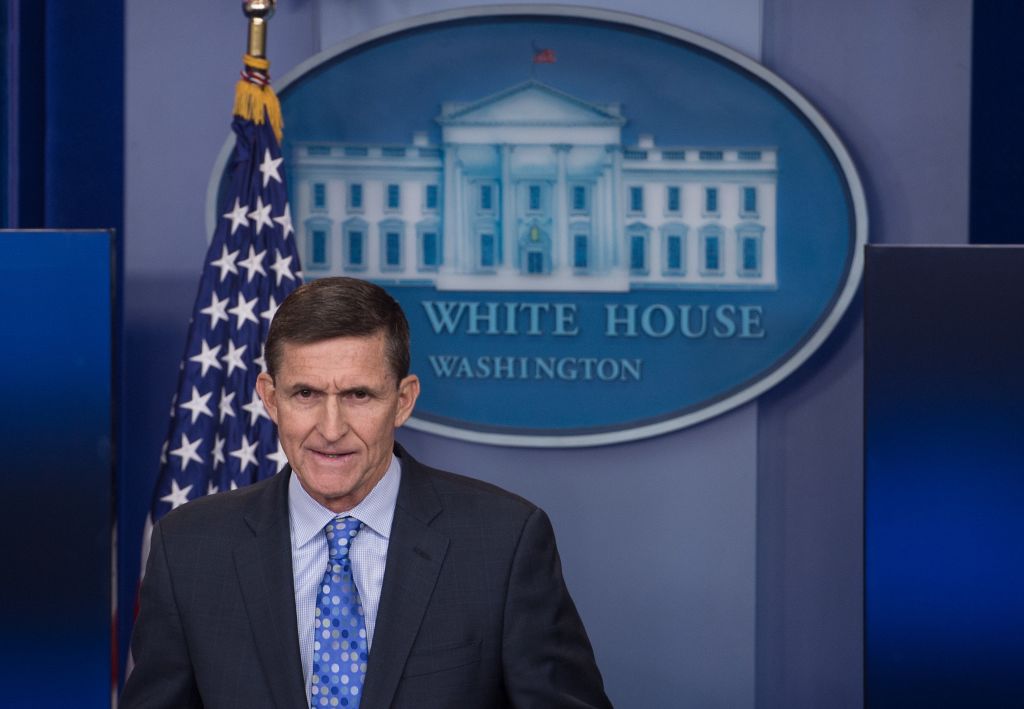 The president, who spent the weekend at his private club in Florida, has yet to comment on Flynn’s status. Nor has Vice President Mike Pence, who previously denied that Flynn had discussed sanctions with Sergey Kislyak, the Russian ambassador to the U.S. Pence and Flynn spoke twice on Friday, according to an administration official.

Trump has told associates he is troubled by the situation, but he has not said whether he plans to ask Flynn to step down, according to a person who spoke with him recently. Flynn was a loyal Trump supporter during the campaign, but he is viewed skeptically by some in the administration’s national security circles, in part because of his ties to Russia.

The administration official and both people with ties to Trump spoke on the condition of anonymity to discuss private conversations.

Stephen Miller, Trump’s top policy adviser, skirted the issue on several Sunday news shows, saying it was not his place to weigh in on the “sensitive matter” or to say whether the president retains confidence in Flynn.

Several other White House officials did not respond Sunday to questions about whether Trump had confidence in his national security adviser. Their silence appeared to reflect some uncertainty about the views of the president, who is known to quickly change his mind.

On Friday, The Washington Post reported that Flynn addressed sanctions against Russia in a call with Kislyak. The report contradicted repeated denials from Trump officials, including Pence, who vouched for Flynn in a televised interview.

Flynn has since told administration officials that sanctions may have come up in the calls, which coincided with the Obama administration slapping penalties on Russia for election-related hacking.

New Jersey Gov. Chris Christie, who led Trump’s transition planning before the election, said Flynn would have to explain his conflicting statements about his conversations with Kislyak to Trump and Pence.

“Gen. Flynn has said up to this point that he had not said anything like that to the Russian ambassador. I think now he’s saying that he doesn’t remember whether he did or not,” Christie said on CNN. “So, that’s a conversation he is going to need to have with the president and the vice president to clear that up, so that the White House can make sure that they are completely accurate about what went on.”

The controversy surrounding Flynn comes as the young administration grapples with a series of national security challenges, including North Korea’s reported ballistic missile launch. The president, who was joined at his Mar-a-Lago estate by Japanese Prime Minister Shinzo Abe, voiced solidarity with Japan.

The White House is also dealing with fallout from the rocky rollout of Trump’s immigration executive order, which has been blocked by the courts. The order was intended to suspend the nation’s refugee program and bar citizens of seven Muslim-majority countries from entering the U.S.

Miller, who was one of the architects of the order, maintained in a round of Sunday show interviews that the president has sweeping executive authority when it comes to barring foreigners he deems pose a risk to the country. He said Trump will do “whatever we need to do, consistent with the law, to keep this country safe” and slammed judges who’ve stood in his way.

“This is a judicial usurpation of the power. It is a violation of judges’ proper roles in litigating disputes. We will fight it,” Miller said in an interview on “Fox News Sunday.”

As for the administration’s next steps, Miller said that “all options” remain on the table,” including a Supreme Court appeal. Trump said on the plane ride to Florida on Friday that he was considering signing a “brand-new order” as early as Monday to try to bypass the legal challenges.

“As you know, we have multiple options, and we are considering all of them,” Miller said on ABC’s “This Week.”

The comments come amid an outcry from immigration activists over an “enforcement surge” by Immigration and Customs Enforcement officers that officials say is targeting immigrants who are in the country illegally and have criminal records.

Advocacy groups contend the government has rounded up large numbers of people as part of stepped-up enforcement. The agency calls the effort no different from enforcement actions carried out in the past.

But Trump and Miller appeared eager to take credit for the action.

“The crackdown on illegal criminals is merely the keeping of my campaign promise. Gang members, drug dealers & others are being removed!” Trump tweeted.

Added Miller on NBC’s “Meet the Press”: “We’re going to focus on public safety and saving American lives and we will not apologize.”