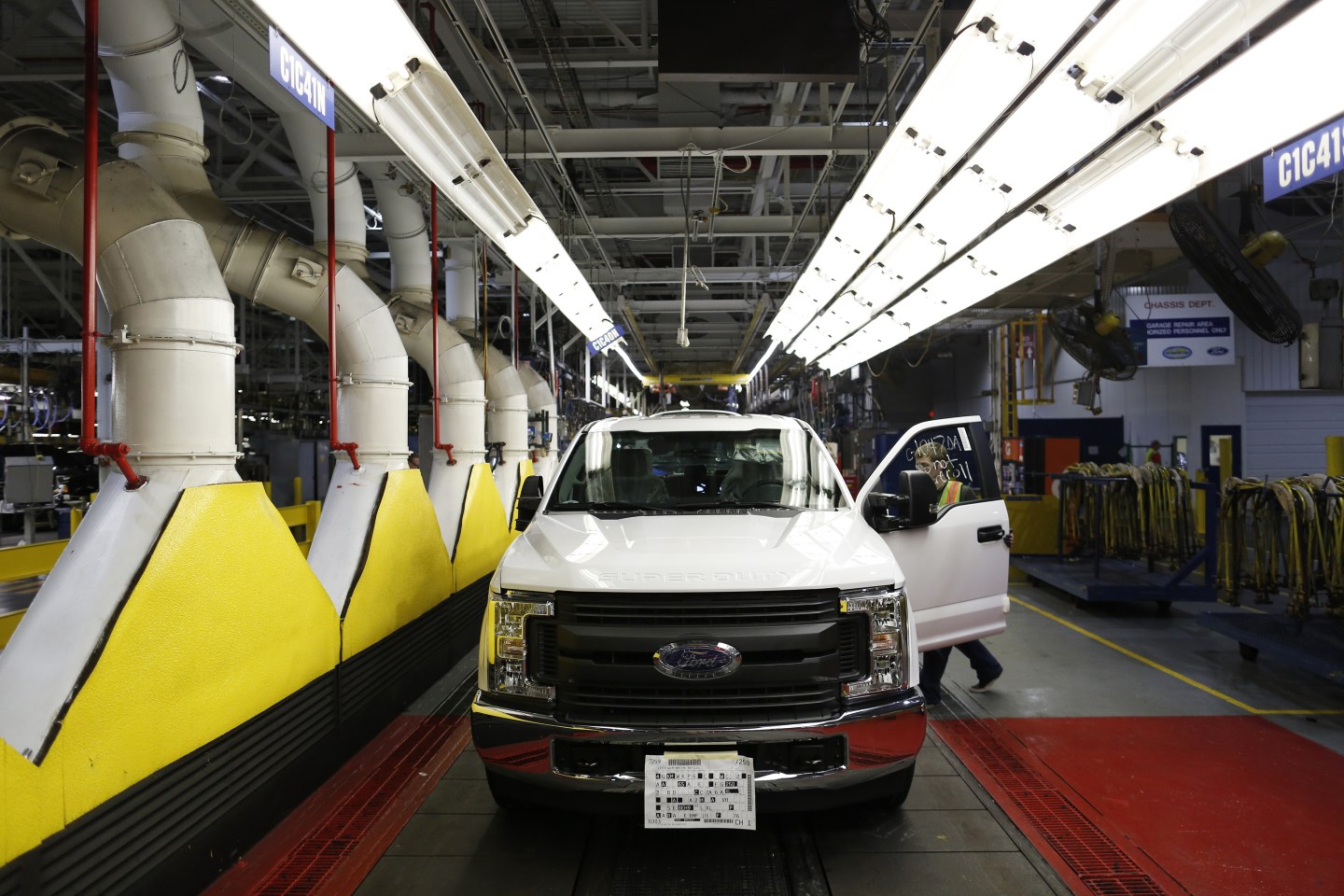 A Ford Motor Co. Super Duty Truck moves along the assembly line at the Ford Kentucky Truck Plant in Louisville, Kentucky, U.S., on Friday, Sept. 30, 2016. The all-new 2017 Ford F-Series Super Duty pickup is one of the many cars, trucks, and utilities that UAW-Ford workers build in the U.S. Photographer: Luke Sharrett/Bloomberg via Getty Images
Photograph by Luke Sharrett—Bloomberg via Getty Images

Mexican autoworkers should be worried. Their jobs are under threat, and affected workers should take concrete steps now to secure their economic future. Technological evolution is, in time, likely to spur high-tech auto-making jobs in countries like the U.S. And President Trump’s plan to build more traditional cars in the U.S., while tempting, only seems like a short-term solution for U.S. autoworkers. The question is what will be making cars in the future—not who.

The auto industry sits on the precipice of potentially monumental change. Ride-share technology is rapidly diffusing around the world, and the push toward autonomous vehicles is accelerating. Consumers will soon be able to commute in driverless, cheaply financed automobiles, and they’re nothing like the cars currently being manufactured in Mexico.

The process behind these trends is called “creative destruction.” During the 1980s and 1990s, many low-skilled auto jobs disappeared from the U.S. Midwest, as countries with cheaper labor developed to match the productivity of American factories. But sometime in the next decade or two, maybe sooner, it will be Mexican autoworkers who will have to cope with inevitable job loss. They will be forced to retrain for positions in other industries or, indeed, for higher-productivity jobs within the auto sector. The alternative is that they will be sidelined in a labor market that has simply passed them by.

President Trump has correctly identified the “destruction” inherent in this process—what he calls “American carnage”—though it is unclear whether he values the “creative” part of the equation as much as he could. The U.S. economy stands to benefit greatly if autonomous ride-sharing fulfills its tremendous potential.

Let us imagine for a moment that President Trump successfully holds back the tide of technological progress for a while. In order for manufacturing jobs to return, assuming that wages cannot be slashed to align with foreign competition, imports must be taxed at a high enough rate for domestic production to make sense to manufacturers. But this course of action would bring dire consequences for the current U.S. economy.

Prices of new vehicles would need to rise substantially in the U.S. Proposals being discussed have canvassed ideas such as a 20% border tax on Mexican imports. The scant details suggest the proposal might represent a value-added tax that hits domestically produced goods in the same manner as imports, and will therefore do little to reverse the trend toward foreign manufacturing.

If President Trump opts to impose a straight tariff on Mexican imports, manufacturers would shoulder some of the burden imposed by the tax, but it is consumers who would pay more for new vehicles. At the margin, this new reality would encourage carmakers to base new plants in the U.S., though a 20% tariff is likely too small to prompt the mass closure of Mexican plants with a significant cost advantage over similar U.S. factories. If the tariff is increased to the point where such closures do occur, the price of a new car in the U.S. will rise.

In the short term, this outcome will create winners and losers in the U.S. economy. The first thing to note is that higher prices for new cars will increase the nominal value of the entire U.S. vehicle fleet. Suppose that a new Camry rises in price from $20,000 to $25,000. A similar used vehicle must also be bid higher as buyers migrate to the cheaper substitute. On the face of it, such a result sounds like a boon for the owners of America’s 270 million cars and trucks. Your 1986 Buick LeSabre is now worth $800 rather than $600! Unlike homeowners, however, car owners cannot borrow against the equity they have in their vehicles. Selling the Buick and pocketing the $200 bounty simply means you will be perpetually late for work.

Auto finance companies, meanwhile, can benefit somewhat from the increased nominal value of the vehicle fleet. Loan repayments and outstanding balances on existing vehicles will be unaffected by the changed circumstances in the industry, so nominal credit losses will be lower than baseline as higher resale prices are reaped for repossessed vehicles. The news is not all good for the banks, however; higher prices and lower sales volume for new cars will cut deeply into loan originations, curtailing revenue growth for the auto finance industry for years to come. With many lenders and lessors concerned about excessive off-lease volume over the next few years, though, higher used car prices would at least provide some cushion against looming credit and residual losses.

Lower sales volume will hit the broader industry hard. Dealerships, which trade on thin margins, will lose business, and many will need to downsize or close. Higher vehicle prices imply more expensive motoring and fewer vehicle miles traveled, though U.S. demand for driving is remarkably inelastic. Nonetheless, any attempt to on-shore vehicle production will negatively affect employment in fields allied to the driving culture.

Finally, given the precedent being established for former autoworkers, one is forced to wonder how President Trump plans to respond to the looming carnage in the U.S. truck-driving industry. If you can make a Toyota Prius driverless, after all, you can apply precisely the same technology to a Mack Pinnacle. On the bright side, diffusion of driverless technology holds the potential to reduce transportation costs, and thus the price of all consumer goods offered for sale around the world. The downside is that truckers, spread widely across the heartland of America and elsewhere, will lose their livelihood and be forced to retrain.

Like blacksmiths, coal miners, and autoworkers before them, truckers will be forced to adapt to changing economic circumstances. Unlike former autoworkers, however, truckers will not have a clear foreign scapegoat. All such workers will be affected equally, regardless of location or nationality.

Tony Hughes is a managing director at Moody’s Analytics.