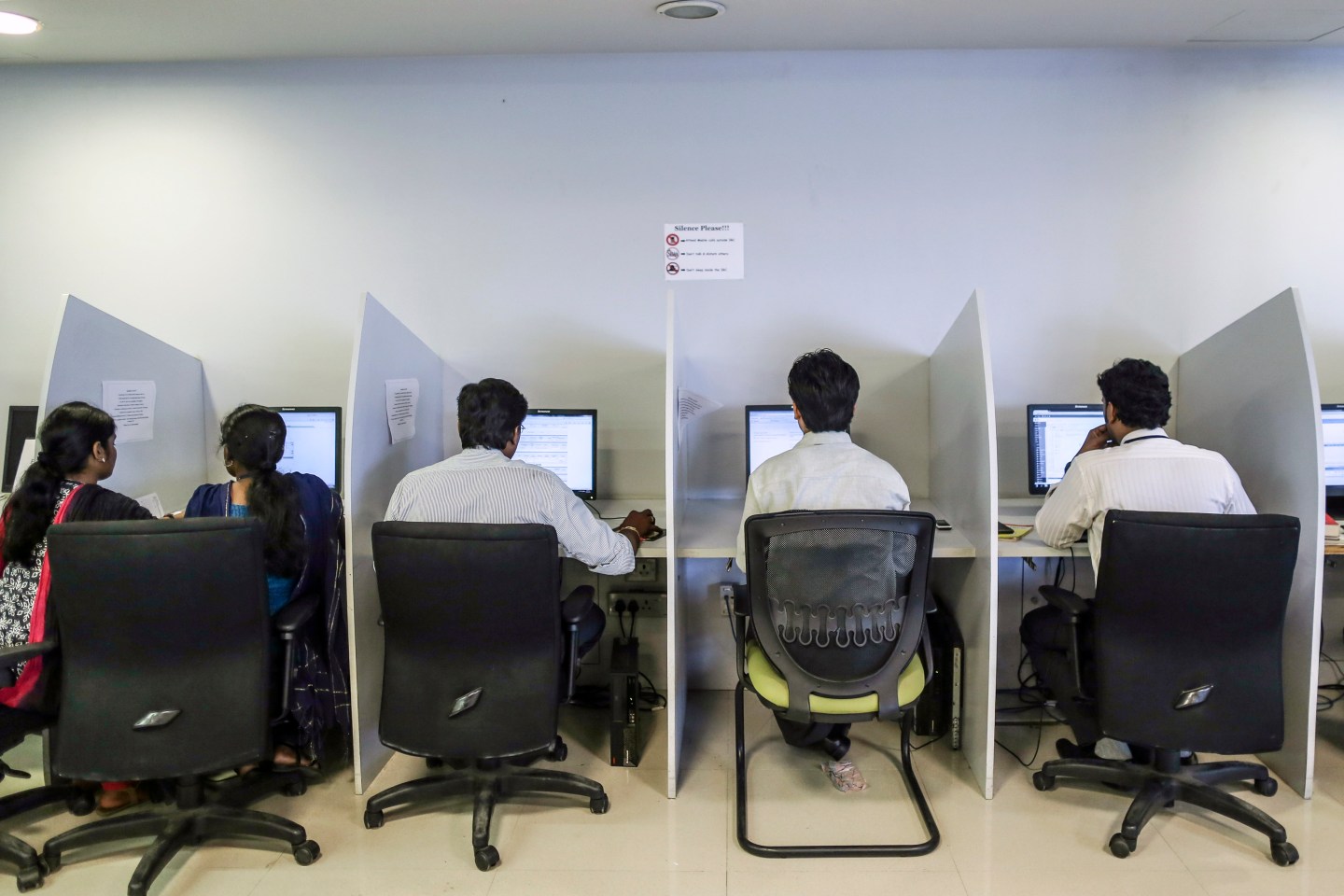 Employees sit working at computers in the library of the Tata Consultancy Services Ltd. (TCS) campus in the State Industries Promotion Corporation of Tamil Nadu Ltd. (SIPCOT) IT Park in the Siruseri area of Chennai, India, on Thursday, Oct. 24, 2013. Tata Consultancy provides computer services and back office support to companies including Citigroup Inc. and Scandinavian Airlines System. The Indian software company also completed its acquisition of Frances Alti SA in July. Photographer: Dhiraj Singh/Bloomberg via Getty Images
Photograph by Bloomberg via Getty Images

Shares of Indian technology companies deepened losses on Wednesday as investors worried President Donald Trump and legislators would impose tougher rules on skilled-worker visas that those firms rely on.

U.S. shares of Infosys fell 1.5%, bringing their loss to 4% since the introduction of legislation in Congress last week aimed at tightening requirements for H-1B work visas.

Indian IT companies serving U.S. corporations are among the largest sponsors for H-1B visas, using them to employ programmers and other technology workers.

“Should the new political regime cap visa access we would expect margins to compress in the IT services sector,” Susquehanna analyst James Friedman warned in a note to clients on Wednesday.

U.S. shares of Wipro, another major Indian IT service firm, lost 1.7% and are down 6% in the past week.

Arguing that they face a shortage of skilled U.S. workers, technology companies including Microsoft and Apple say they need more H-1B visas, while critics say the program is used as a source of low-cost labor.

A bill introduced on Jan. 24 by Congresswoman Zoe Lofgren, a Democrat from California, would double the minimum salary required for holders of H-1B visas to $130,000, which is more than many currently make.

White House Press Secretary Sean Spicer told reporters on Monday that Trump was looking at potential new rules for H-1B visas as part of a larger immigration effort. His proposed Attorney General, Senator Jeff Sessions, is a long-time critic of the H-1B program.

An increase in the minimum salary paid to H-1B visa holders could hurt the earnings of Indian IT companies by as much as 22%, Deutsche Bank said in a report on Tuesday.

For more about India, watch:

In 2015, Tata Consultancy Services secured 8,333 H-1B visas, more than any other company, according to government data compiled by the Institute of Electrical and Electronics Engineers.

Tata’s stock dropped 2.78% on the Indian stock market on Wednesday and is down 8% so far this week.