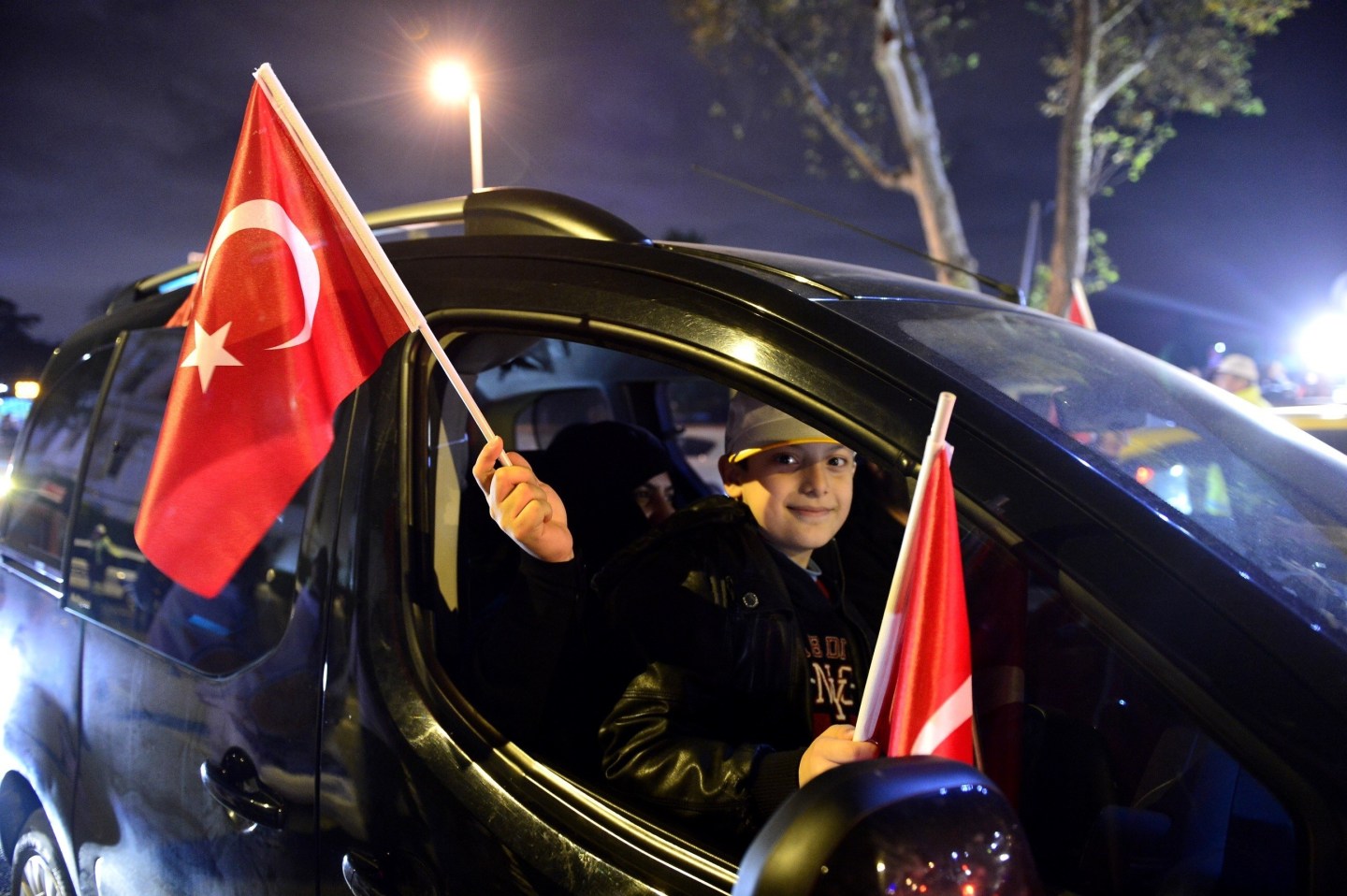 Campaigning has not officially started, but a string of video “selfies” by the likes of sports stars, actors and cabinet ministers has already launched a divisive debate on plans that would hand Turkish President Tayyip Erdogan sweeping new powers.

His supporters see the move to replace Turkey’s parliamentary democracy with an all-powerful presidency as a guarantee of stability at a time of turmoil. Opponents fear a lurch towards authoritarianism if an April referendum approves the change.

In a country where mainstream news channels are saturated by Erdogan’s appearances and speeches by government ministers, and where political demonstrations are tightly restricted, the battle for votes is increasingly being waged online.

“Unfortunately the ‘No’ supporters don’t have much opportunity to get their message across on television channels or other media,” said actor Baris Atay, who was castigated by pro-government newspapers for a social media video in which he says “no to one-man rule, fascism and dictatorship”.

“Saying ‘Yes’, siding with Erdogan, and being a nationalist is thinking of the country’s future, but saying ‘No’ is being a provocateur, a traitor and a terrorist—this is the perception they’re trying to establish,” he told Reuters.

Against a backdrop of bombings by Islamic State and Kurdish militants, a failed coup last July, and the sharpest economic slowdown in almost a decade, Erdogan has cast Turkey as under attack and in need of stronger leadership.

His supporters dismiss such claims and see the issue as a test of patriotism.

“Our homeland, our country is passing through a very tough period. A veritable war of independence. We want a strong Turkey. For a strong Turkey, yes, I am in,” Ridvan Dilmen, the country’s best-known soccer pundit, said in a video message on Twitter, triggering a chain of celebrity reactions.

“Coach Ridvan, I got your call. I’m in for a strong Turkey too,” said soccer star Arda Turan, who plays for Barcelona, in a similar post, drawing 10,000 re-tweets in the soccer-mad nation.

For more on Turkey and tech, watch:

Erdogan assumed the presidency, a largely ceremonial position, in 2014 after more than a decade as prime minister with the ruling AK Party, which he co-founded. Since then, pushing his powers to the limit, he has dominated politics by dint of his personal popularity.

Opponents accuse him of increasing authoritarianism with the arrests and dismissal of tens of thousands of judges, police officers, soldiers, journalists and academics since the failed coup.

Erdogan is expected in the coming days to officially approve the constitutional reform bill passed by parliament this month that will pave the way for the referendum, likely to be held on one of the first two Sundays in April.

He was quoted on Friday as saying campaigning would officially start on Feb. 7. But Foreign Minister Mevlut Cavusoglu and Energy Minister Berat Albayrak, Erdogan’s son-in-law, have already posted selfie videos.

“We’re in too for a powerful Turkey,” Prime Minister Binali Yildirim chanted with members of the women’s wing of the AK Party in another video on Twitter.

Pollsters are divided on how the referendum will play out, though many agree the stance of the nationalist MHP opposition will be key. The AKP has been drumming up nationalist support while the MHP has been divided by a bitter leadership row.

“According to our latest polls, two thirds of MHP voters are in the ‘Yes’ camp,” said Mehmet Ali Kulat, head of pollster Mak Danismanlik, which is seen as close to Erdogan.

The MHP last year expelled three of its members who attempted to oust veteran leader Devlet Bahceli. They oppose the constitutional reform, while Bahceli backs it.

The secularist opposition CHP strongly opposes the changes. So does the pro-Kurdish HDP, the second largest opposition party. But a ‘No’ campaign by the HDP could help Erdogan by rallying nationalist support behind him.

Nationalists view the HDP as deeply tied to the Kurdish PKK militant group and have championed the prosecution under Erdogan of thousands of its members for suspected militant links.

That has made the CHP reluctant to campaign on a shared platform with the pro-Kurdish opposition, Ozgur Ozel, a deputy chairman for the CHP, told Reuters, fearing it could undermine support.

“The ‘No’ side is like a rainbow hosting all colours. There shouldn’t be too many party symbols, just slogans, emblems, phrases and symbols that have been agreed upon,” he said.

The last time Turkey’s disparate opposition groups tried to forge such unity was during anti-government protests in 2013. Those demonstrations ultimately strengthened Erdogan, who used them to rally supporters and expose opposition splits.

For now, the ‘No’ campaign is largely fighting back online, with soccer fans particularly vocal.

“For a free, equal and secular country we say NO,” said the Twitter account of Sol Acik, a group of leftist supporters of Istanbul’s Fenerbahce soccer club. Similar messages followed from fans of its Istanbul rivals Galatasaray and Besiktas.

Another video shared widely on social media showed students singing a popular song with alternative lyrics on an Istanbul ferry, mocking Erdogan’s policies and calling for a ‘No’ vote.

It also showed police waiting on the quayside and trying to detain them as they docked, before other passengers persuaded them not to.