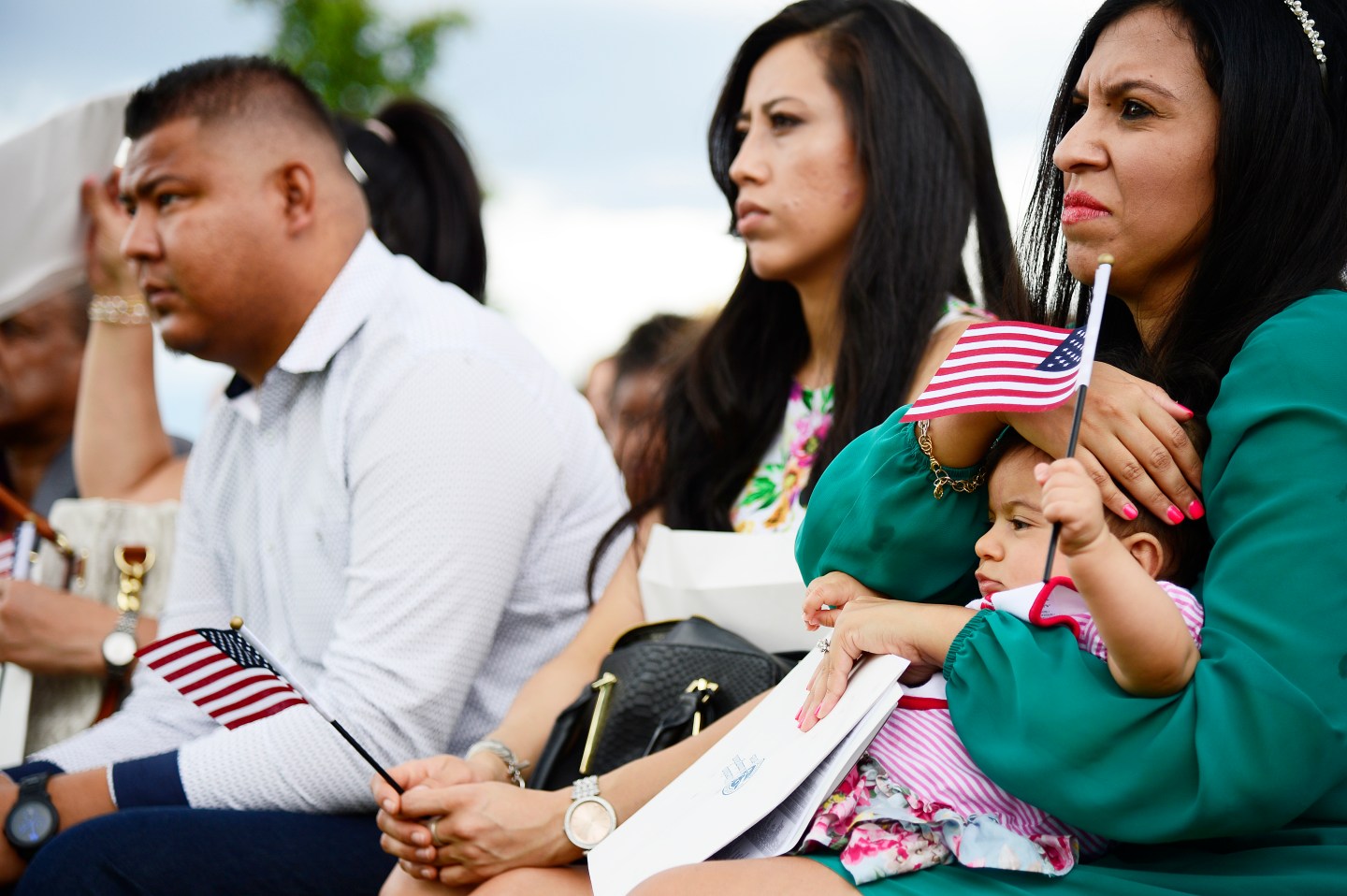 DENVER, CO - AUGUST 2: Myriam Zaky, from Egypt, covers her daughter, Gabriella, from the rain during the final part of a naturalization ceremony August 2, 2015 at Parkfield Lake Park. 29 immigrants took the oath to become citizens of the United States of America during a naturalization ceremony that took place during the 3rd Annual Taste of Ethiopia. (Photo By Brent Lewis/The Denver Post via Getty Images)
Brent Lewis Denver Post via Getty Images

Families, students, engineers, and doctors from across the Middle East who have made the United States their home on Saturday found themselves potentially uprooting established lives, after President Donald Trump this week curtailed immigration from seven Muslim-majority countries.

The countries—Iran, Iraq, Syria, Yemen, Sudan, Libya, and Somalia—together sent around 86,000 visitors to the United States in 2015, according to Department of Homeland Security data. More than 52,000 people from those countries obtained permanent U.S. residency that year.

Iranian-born Masoud Afzali, 34, a computer programmer in Richmond, Virginia won a U.S. green card through an immigration lottery and came to the United States with his wife and daughter about a year and a half ago. Last week, his wife and three-year-old daughter went to visit family in Iran.

Now, they face the prospect of being separated indefinitely. After some initial confusion, the Department of Homeland Security said on Saturday that legal permanent residents, so-called green card holders, were included in the immigration ban.

“We based our entire lives here,” Afzali said in a phone interview on Saturday, his voice breaking. “I thought that this country, one of its values was that they don’t care what religion you have or where you’re from, and that you can live freely.”

Hamza Alshargabi, 35, a Yemeni man born in Syria, is a doctor at the New York City Emergency Management Department. He is a legal permanent resident, living in the United States since 2012. He and his wife, Siham Inshassi, a U.S. citizen, will likely have to abandon a planned trip to Japan this year for fear he would not be allowed back, Alshargabi said.

On Saturday morning, they were researching how long he would be allowed to remain in the United States or whether they would eventually be forced to move or live apart.

“There’s a level of concern that I cannot quite internalize yet,” said Inshassi, born in the United States to immigrant parents. “I’ve been here all my life. It’s what I know.”

Some were left pondering whether chance had upended their lives.

Google CEO Orders Employees Back to the U.S. After President Trump’s Immigration Order

Iranian-born Salman Mirzaei, 33, of Ithaca, New York, said his wife had been approved for a visa to do research at Cornell University. She obtained her Ph.D in polymer chemistry from the University of Tehran, and they moved to the United States two years ago so he could attend a business program at the University of California, Los Angeles.

His wife returned to Iran with their two-year-old daughter to await visas. The visas were issued Friday – though, by mistake, U.S. customs officials had not actually placed them in the passports. The U.S. consulate in Montreal emailed that it was an “oversight” and that they would return the passports with the visas as soon as possible.

“I think if they didn’t make that mistake, she could have arrived maybe the day that Trump issued the executive order,” he said.

Mirzaei started his own food service company, which he hoped to expand to universities throughout the Ivy League, and bought new furniture for their home, where they have a long-term lease.

In Stillwater, Oklahoma, Saleh Taghvaeian, 36, is contemplating how to reunite with his wife who is in Iran to visit family, who he fears will now not be allowed back into the United States. Both of them were on track to get their green cards.

He teaches agricultural water management at Oklahoma State University. Many of the farmers he works with voted for Trump.

“I don’t think this is why they voted for him,” he said. “They called me multiple times and said they’re praying for us.”