The Best Stocks to Own If Trump Brings Foreign Cash Home 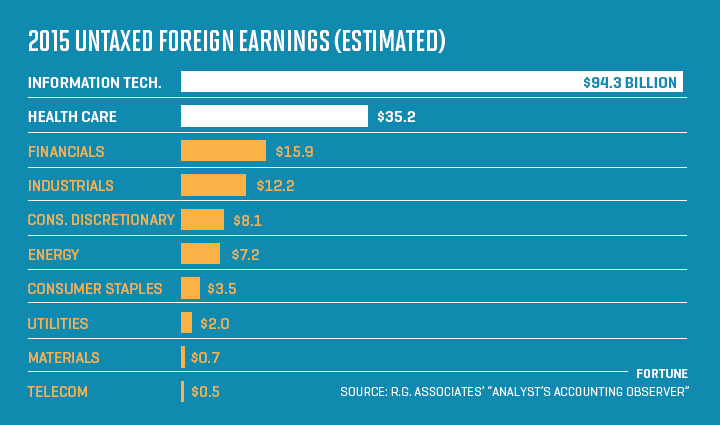 Of all the reasons investors have found to be bullish since Donald Trump’s election, one of the biggest is the prospect of a gigantic windfall flowing to U.S. companies from abroad. If a Trump campaign proposal regarding untaxed foreign earnings becomes law, a flood of $1 trillion or more locked away overseas could be freed for dividends, share buybacks, and acquisitions. That amounts to about 5% of the market cap of the S&P 500—no mere blip. And its return would give investors in some of the biggest American businesses, particularly in tech and health care, something to cheer about.

Here’s why repatriation is an issue in the first place. The federal government taxes U.S. companies on all profits they earn, anywhere around the globe, at 35%. But there’s a loophole: If a company leaves foreign earnings in the nations where they were earned, either parked in cash or invested in plants and inventories, the money is exempt from U.S. tax until it’s returned to the parent company as repatriated income.

If it is returned, companies get a credit for tax they have paid in other nations. But since U.S. corporate rates are among the world’s highest, sending profits stateside still generates a big bill. For example, a manufacturer transferring profits from tax-haven Ireland to the U.S. would owe the Treasury the difference between the Irish rate of 12.5% and our levy of 35%.

To avoid that bite, America’s multinationals now routinely park a substantial share of their earnings abroad. According to data assembled by Jack Ciesielski, author of the Analyst’s Accounting Observer, S&P 500 companies held $2.2 trillion in untaxed foreign earnings, or UFE, at the close of 2015; add non–S&P 500 companies and 2016 profits, and today’s total is most likely closer to $2.6 trillion.

Many legislators favor breaking the logjam with a repatriation “holiday,” in which companies get a one-time shot to bring money back at a lower rate. (The U.S. last held such a holiday in 2004.) On the campaign trail, Trump proposed taxing repatriated UFE at 10% instead of 35% and using the resulting bump in tax revenue to pay for infrastructure; that idea has earned some early bipartisan support.

If Congress enacted such a deal, of course, only a fraction of the $2.6 trillion would reach shareholders. It’s important to note that much of the UFE is not actually in cash; it’s invested in overseas plants or provides working capital for foreign subsidiaries. At press time, specifics of a plan hadn’t emerged, and figuring out which assets will ultimately get taxed, and at what rate, will be thorny. But based on Trump’s earlier proposal and on past holidays, investing pros estimate that about 40% of the UFE, or around $1 trillion, will come back to the U.S.—and that companies would net at least $850 billion after taxes.

Two sectors are likely to account for much of that money: technology and health care, chiefly pharmaceuticals. At the end of 2015, S&P 500 tech and drug stalwarts held some $1.14 trillion of UFE, or 51% of the total. Neither industry is likely to use much of the money for R&D or new plants. “They already have access to all the cash they need for investment,” notes Michael Faulkender, a finance professor at the University of Maryland. Instead, they will channel their windfalls toward goals that could be a boon for investors.

The cash will help tech titans solve a vexing problem: how to pay shareholders without taking on an overdose of debt. Today Apple (AAPL), Microsoft (MSFT), Cisco (CSCO), Oracle (ORCL), and Intel (INTC), which account for over half of tech UFE, have been paying out between 84% and 94% of their cash flow in dividends and buybacks over their past three fiscal years. But they generate half of that cash overseas, and since they can’t repatriate it without a tax hit, they have been funding their payouts by borrowing. Since 2013, Apple’s long-term debt load has risen from nearly zero to $75 billion, and Cisco’s has risen from $13 billion to $35 billion. Continuing to borrow at that pace is highly problematic. “Investors will say, ‘Do I really want more exposure to Apple after they owe $150 billion?’ ” notes Rick Lane, a senior analyst at Moody’s. But with repatriated funds, the giants could keep investors happy without increasing their debt burden to dangerous levels.

Repatriation would also help Big Pharma continue funding dividends and buybacks. But these companies also have a fresh appetite for acquisitions, says Brad Loncar of Loncar Investments, a firm that offers ETFs specializing in companies that develop cancer therapies. Eli Lilly (LLY), Sanofi, and Gilead (GILD) have drug pipelines in urgent need of replenishment, and bigger rivals such as Pfizer (PFE) and Amgen (AMGN) want to purchase smaller companies to keep their revenues waxing.

Loncar and other investors and analysts say the most likely targets for acquisition—and an accompanying share-price bump—are midsize players with innovative treatments for cancer and liver disease. Among the attractive takeover candidates are Tesaro (TSRO), developer of an ovarian-­cancer drug that is in late-stage trials; Incyte (INCY), maker of a pioneering treatment for blood disorders; Exelixis (EXEL), a maker of therapies for melanoma and thyroid cancer; and Acadia (ACHC), a developer of small-molecule drugs for treatment of Parkinson’s and Alzheimer’s diseases.

In the ideal scenario, permanent new tax policies will erase the need for companies to park cash overseas in the first place. For now there’s no guarantee that a repatriation bonus will help investors in the long run. If the world’s Apples and Pfizers buy back shares at too high a price or overpay for acquisitions, their shareholders could suffer later. Still, in the short term, stocks will do a lot better if $1 trillion in foreign profits flows to U.S. shores.

A version of this article appears in the February 1, 2017 issue of Fortune with the headline “How Investors Win if Cash Comes Home.”