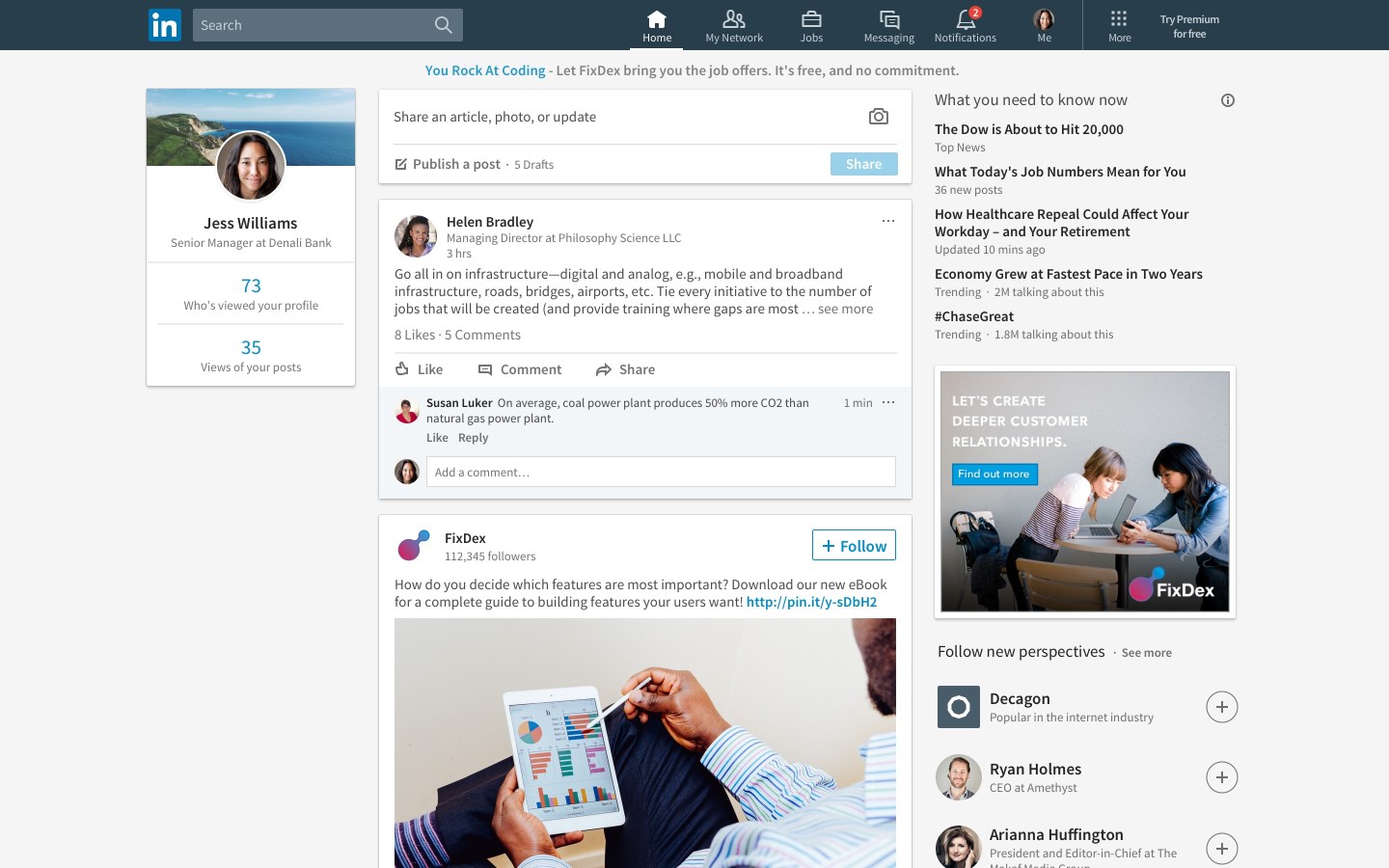 If you were eagerly anticipating LinkedIn’s new desktop design, your wait is over. On Thursday, the company unveiled its new desktop look-and-feel, which includes a streamlined, less cluttered, and uniform look across the social network.

And, if all that feels familiar, it’s probably because you’re a LinkedIn mobile user. The company rolled out a new, more spare, mobile app a year ago.

“We’re a mobile-first company, and we built off the mobile app launched last year,” said Amy Parnell, senior director of design for LinkedIn, which as of last month is part of Microsoft (MSFT).

Both the desktop and mobile applications build off the same base and will now “stay in lockstep,” Chris Pruett, senior director of engineering told Fortune in advance of the launch. The company says 60% of its traffic now originates from mobile devices

Indeed, the look is much cleaner, with more white space. And, much to my relief, navigating between the various modules—profile, home, messaging, jobs, notifications, my network, etc.—is much easier. You click on “more” in the upper right corner to access other modules, and the look of all the modules is now consistent.

In addition, there is now one search box for everything: People, jobs, companies. LinkedIn says it will also add the ability to search posts as well. However, some advanced search features that were previously available to Premium users have been discontinued.

A spokeswoman confirmed that change, saying that as the company tried to simplify the application, it discontinued advanced premium search options, which she said were not heavily used. Customers with pricier Recruiter or Sales Navigator accounts can still use advanced search.

And users can more easily opt out of notifications they find superfluous and annoying. If you’re sick of being prompted to send happy birthday or holiday greetings to people you barely know, you should be able to opt out completely, although I have not been able to do so with the new product. The spokeswoman said the company continues to add settings that will let users choose and control what they wish to receive.

More to the point, Pruett said LinkedIn is getting smarter about discerning which contacts a member is close to or might care about and will “surface” notifications about job changes of people that you might have an affinity with but not about people you might not care about.

Basically, users should be notified less often, period, and only about people and events they care about. That should be a relief to the many LinkedIn users who have complained about getting pinged about things they simply don’t care about. Here’s the old interface:

And here’s its replacement.

Aside from the new look, Pruett and Parnell also vowed that LinkedIn generally, by virtue of the data that its software sees and analyzes, is getting smarter about what each user cares about. For example, it will only suggest endorsements about people you interact with, or share skills with, and/or are otherwise of interest to you.

For more on LinkedIn and Microsoft, watch:

If that works as advertised, it will be a big deal. As one wag told Fortune for an earlier story detailing a wish list for LinkedIn: “I love getting endorsements on skills I don’t have from people I don’t know.”

The stakes for LinkedIn and its new corporate overlord are high. While LinkedIn is seen as “the Facebook for professionals,” it faces challenges, not the least of which was its old design. But given that Facebook (FB) itself appears to be gunning for corporate prominence with its new Workplace, and that Microsoft rivals like Salesforce.com (CRM) are now wary of a Microsoft-owned LinkedIn, the company has to tread a fine line.