Sanders Backers Look to Sway Democratic Politics From Inside 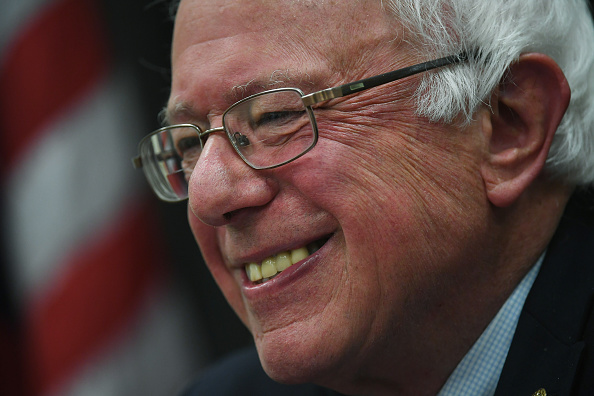 The Vermont senator’s loyalists helped engineer a show of political muscle in Democratic Party elections in California last week, months after Sanders promised that the populist political movement he inspired would endure beyond his failed 2016 presidential campaign.

Nurses and other liberal activists, many faithful to Sanders, flooded local elections for over 1,100 party delegate slots as part of a national push to influence party leadership and advance his populist agenda in the era of Donald Trump.

“There is an opportunity here, when a state reorganizes, to create change from the inside,” said Shannon Jackson, executive director of Our Revolution, the Sanders-inspired group that said it sent out over 150,000 emails and texts urging party members to participate in the California contests.

“We are going to continue to do this around the states,” Jackson said.

National Nurses United, which endorsed Sanders in the 2016 campaign, and its affiliate, the California Nurses Association, said nurses and other liberal activists claimed a majority of the slots up for grabs, though the tally had not been finalized by party officials as of Friday.

The California elections took place as Democrats, still stunned by Hillary Clinton’s defeat in November, look for a way forward after the Republican sweep of the White House and Congress. The independent Sanders, 75, has not ruled out another presidential run in 2020.

Part of the struggle will play out in the fight for control of the Democratic National Committee. Meanwhile, Sanders’ influence is being witnessed in places like New Jersey, where Assemblyman John Wisniewski is running a Sanders-inspired campaign for governor, and Iowa, where Our Revolution has endorsed Blair Lawton to lead the state Democratic Party.

He’s also part of a broader Democratic effort to counter Republican efforts to scrap the national health care law, which includes rallies around the country just before Trump’s inauguration.

Sanders, the former self-described socialist mayor of Burlington, Vermont, has never been a seamless fit with the party whose presidential nomination he sought last year. Positioned as an outsider, he spent months railing against Clinton’s ties to Wall Street and big banks and urged the party to embrace universal health care, free tuition at public universities and colleges and stronger regulation on the financial industry.

In the California contests last week, the turnout in a suburban Sacramento district startled longtime Democratic strategist Roger Salazar, a Clinton supporter who lost his bid for one of the openings.

He said several hundred people turned out for an event that would typically attract less than 100 Democratic insiders.

“I think a part of this is blowback from the election,” said Salazar, after a primary election in which many Sanders supporters believed the party machinery was skewed against his candidacy. “These folks don’t feel the changes are coming fast enough.”

The turnout amounted to a repeat of sorts of his attempt to win the state presidential primary in June. He fell short, but his rallies were usually packed to capacity with thousands of cheering, mostly younger voters, many drawn to politics for the first time by his talk of economic and social justice.

However, it’s difficult to predict the degree of influence newly elected Sanders supporters could bring to a state already known as a Democratic fortress.

California has long been recognized as a pioneer in liberal policies — the Legislature has enacted groundbreaking laws on climate change, the $15 minimum wage and assistance for people who entered the country illegally.

And the rank-and-file elections represent only about a third of the number of Democrats who could attend a state convention in May where a new party chair will be selected — others include picks by elected officials and county committee members.

Congressional Black Caucus to be More Aggressive Under Trump

Roseann DeMoro, executive director of the California Nurses Association and National Nurses United, said many Sanders supporters remain disenchanted with a party that they believe is too closely tied to corporate donors, criticisms often raised by Sanders.

With Washington controlled by conservatives, DeMoro said California could move to enact universal health care. And the party has done too little to invest in schools and address economic inequality in a state home to Hollywood and the Silicon Valley, she said.

The vote is an endorsement of “this opportunity to transform the Democratic Party,” she said.

Los Angeles Democratic Party chair Eric Bauman, a Clinton supporter in the 2016 race who is seeking to lead the state party, compared the turnout to the surge of liberal activists who came into the party with the rise of Howard Dean in the 2004 presidential race.

Inside Democrats’ Plan to Beat Donald Trump at His Own Game

“They came in as outsiders, they became insiders. This is a pattern we’ve seen over and over again,” said Bauman, also a vice chair of the state Democratic organization. “It brings fresh blood into the party.”

Where will the new delegates go in May, when Bauman faces Kimberly Ellis for the top Democratic job? Ellis is a longtime party activist endorsed by state nurses and runs a group promoting women candidates.

“Many of those folks will support my opponent, many of them will support me,” Bauman predicted. “It’s very hard for anyone to say the California Democratic Party is not a progressive party.”