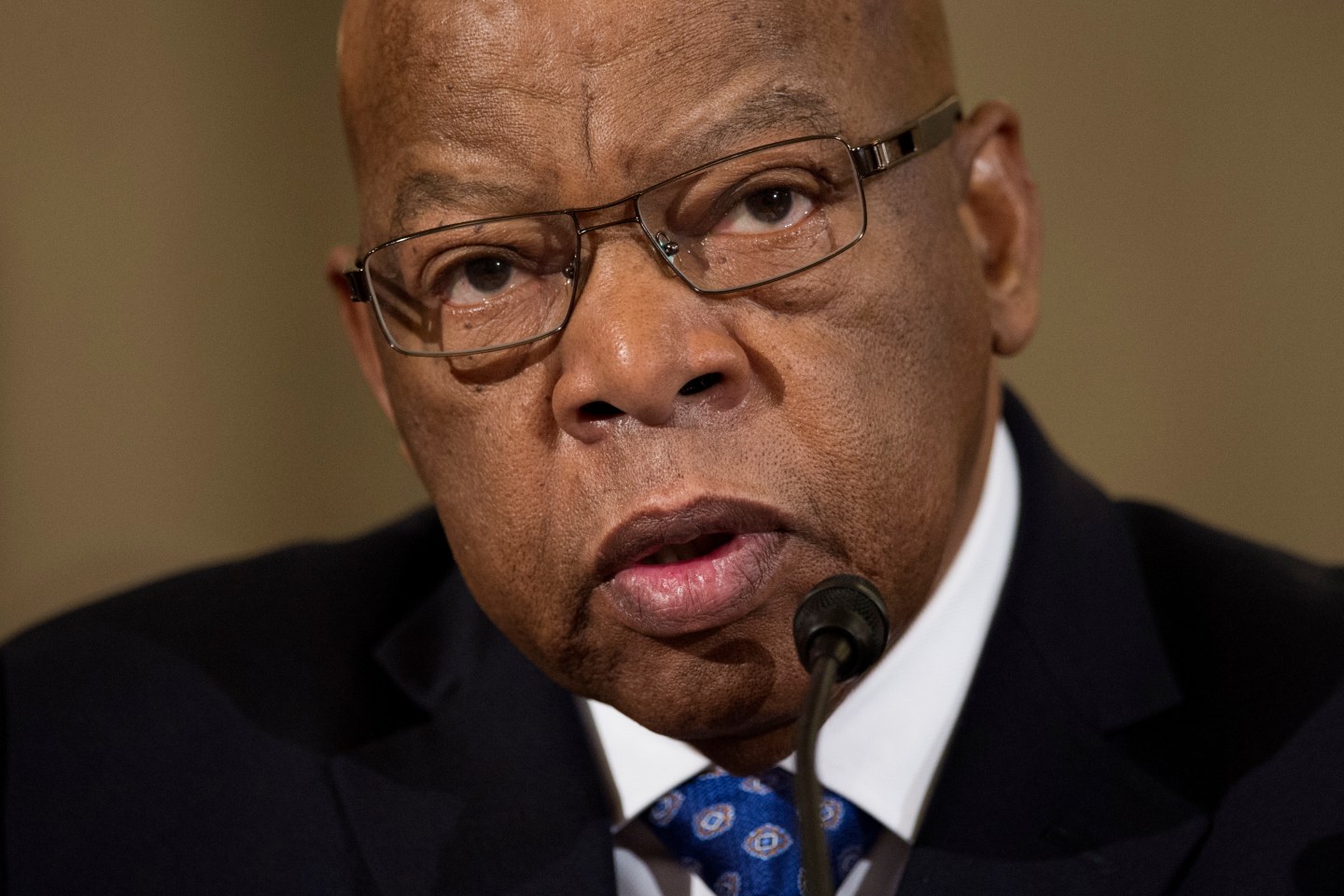 Trump tweeted on Saturday that Lewis, D-Ga., “should spend more time on fixing and helping his district, which is in horrible shape and falling apart (not to mention crime infested) rather than falsely complaining about the election results.”

Congressman John Lewis should spend more time on fixing and helping his district, which is in horrible shape and falling apart (not to……

The incoming president added: “All talk, talk, talk – no action or results. Sad!”

mention crime infested) rather than falsely complaining about the election results. All talk, talk, talk – no action or results. Sad!

Lewis, among the most revered leaders of the civil rights movement, suffered a skull fracture during the march in Selma, Alabama, more than a half-century ago and has devoted his life to promoting equal rights for African-Americans.

For many African-Americans the contrast between this inauguration and Barack Obama’s first one, in 2009, was striking.

The 16-term congressman said Friday that he would not attend Trump’s swearing-in ceremony at the Capitol this coming Friday, and that it would be the first time he had skipped an inauguration since joining Congress three decades ago.

“You know, I believe in forgiveness. I believe in trying to work with people. It will be hard. It’s going to be very difficult. I don’t see this president-elect as a legitimate president,” Lewis said in an interview with NBC’s Meet the Press that is set to air Sunday.

“I think the Russians participated in helping this man get elected. And they helped destroy the candidacy of Hillary Clinton,” Lewis said.

Lewis’ spokeswoman, Brenda Jones, declined to respond to Trump and said the lawmaker’s “opinion speaks for itself.”

“We as a nation do need to know whether a foreign government influenced our election,” she said.

Congressional Black Caucus to be More Aggressive Under Trump

U.S. intelligence agencies have said Russia meddled in the election to help Trump win. After spending weeks challenging that assessment, Trump finally accepted that the Russians were behind the election-year hacking of Democrats. But he also emphasized that “there was absolutely no effect on the outcome of the election including the fact that there was no tampering whatsoever with voting machines.”

“Let us remember that many have tried to silence @repjohnlewis over the years. All have failed,” tweeted House Minority Leader Nancy Pelosi, D-Calif.

Ahead of #MLKday2017, let us remember that many have tried to silence @repjohnlewis over the years. All have failed.

“John Lewis is an American hero,” Rep. David Cicilline, D-R.I., said in a tweet directed at Trump. “You’re a fake billionaire who won’t release his taxes. Put down Twitter and get serious about governing.”

John Lewis is an American hero.

You're a fake billionaire who won't release his taxes.

Put down Twitter and get serious about governing. https://t.co/LIvpXhX2wX

Trump continues to use Twitter to attack his adversaries, just as he did throughout the campaign.

For more on civil rights, watch:

Trump’s assertion that Lewis’ district is “falling apart” and “crime infested” is hard to prove.

Georgia’s 5th Congressional District includes the Atlanta metro region, which has a large African-American population. The district is considered one of the nation’s fastest growing areas, but its crime and poverty rates are higher than the national average.

Lewis’ office notes that the district is home to several historically black colleges and universities in addition to the Hartsfield-Jackson Atlanta International Airport, one of the world’s busiest airports.