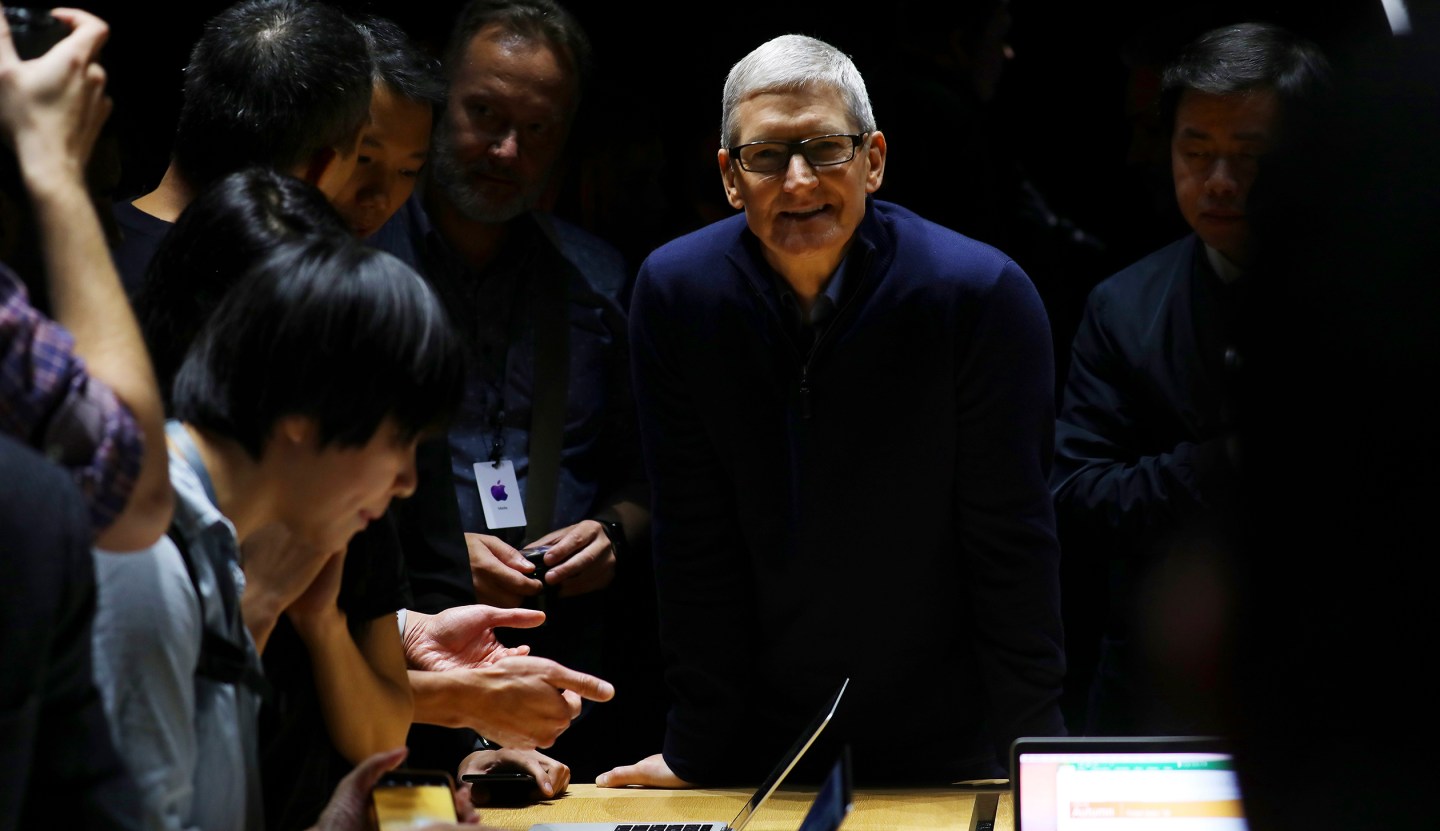 Tim Cook, the chief executive of Apple, in a demonstration area during the unveiling of the new MacBook Pro at Apple headquarters in Cupertino, Calif., Oct. 27, 2016. In the first major overhaul of the Pro in four years, Apple showed off new versions on Thursday that feature the Touch Bar, a new touchscreen strip at the top of the keyboard that changes to display functions specific to the app currently being used. (Jim Wilson/The New York Times)
Jim Wilson — The New York Times/Redux

With the largest net income of any public company, Apple should be a huge winner from corporate tax reform. A draft proposal put forth by Republicans in Congress last year expected to be the starting point for the party’s plan this year aimed to cut the overall corporate tax rate to 20% from 35%, potentially saving Apple billions.

But portions of the tax reform plan intended to promote domestic production over imports could wipe out the benefits, according to a rough analysis by UBS analyst Steve Milunovich on Friday. If Republicans and President-elect Trump agree to impose what’s being called a border adjustment tax provision to penalize imports, the net impact of tax reform on Apple’s bottom line could be slightly lower net income per share in the end. And if the border adjustment provision sends the value of the dollar skyrocketing, as many predict, Apple would end up a huge loser.

The problem for Apple is that its products are mainly manufactured in China. Under the Republican plan, imported goods sold in the United States will be taxed without allowing a deduction for the cost of manufacturing or other expenses.

Under current tax rules, when Apple sells a phone in the United States, it is taxed not on the full price but on the amount it netted after deducting the cost of making the phone and other expenses. In a simplified example Milunovich offers: On a $700 iPhone sale, Apple may have spent $420 to make and market the phone, so it pays 35% tax on the remainder of $280. That’s a tax of $98.

If the corporate rate was slashed to 20% and nothing else changed, Apple (AAPL) would pay only $56 in tax–a 43% tax cut.

But because the iPhone is imported—and if the new tax system includes a border adjustment—Apple would have to pay the 20% tax on the entire $700 sales price, or $140, a 43% increase from the current system. Milunovich applies his simple model to Apple’s larger financial situation, including other portions of the Republican plan like the ability to return untaxed foreign profits to the United States at a rate of only 8.75%.

The bottom line: Despite the huge tax rate cut to 20%, Apple’s net income per share over the past few years would have been unchanged to 2% lower.

Of course, it is impossible to predict exactly how the tax system will end up, Milunovich warns. “Our analysis attempts to cast a wide net over possible outcomes and provides a general thought process but recognizes the complexity of the factors involved,” he writes as a potential caveat to the report.

Pulling back the lens even a bit further reveals a larger danger for Apple, the analyst notes. Many economists predict one impact of the border adjustment tax system will be a massive appreciation in the value of the dollar. That hits multinational companies like Apple that are based in the United States and collect a large portion of sales and profits overseas.

There’s no way to predict just how much the dollar will appreciate. Apple benefits somewhat from the higher dollar by effectively paying its overseas suppliers less. But in Milunovich’s rough model, Apple’s earnings per share could drop 4% to 25% if the dollar appreciated 5% to 20% in value.

Despite the ugly scenario outcomes, the analyst warned that he was making many assumptions and simplifications, so the ultimate outcome in the real world is harder to pin down.

“Investors like numbers. ‘What’s the EPS impact? What’s the effective tax rate?’ which is why we indulged in the analysis above,” Milunovich writes. “However, at this point it’s a mere thought experiment. Appreciation of the dollar would not happen uniformly across currencies nor would import prices adjust smoothly. The cascading effects of an appreciating dollar on world trade, capital flows, and demand are outside this analysis. However, we hope the analysis provides a range of potential outcomes.”