Giant Chickens Pose a Big Dilemma for the Agricultural Industry 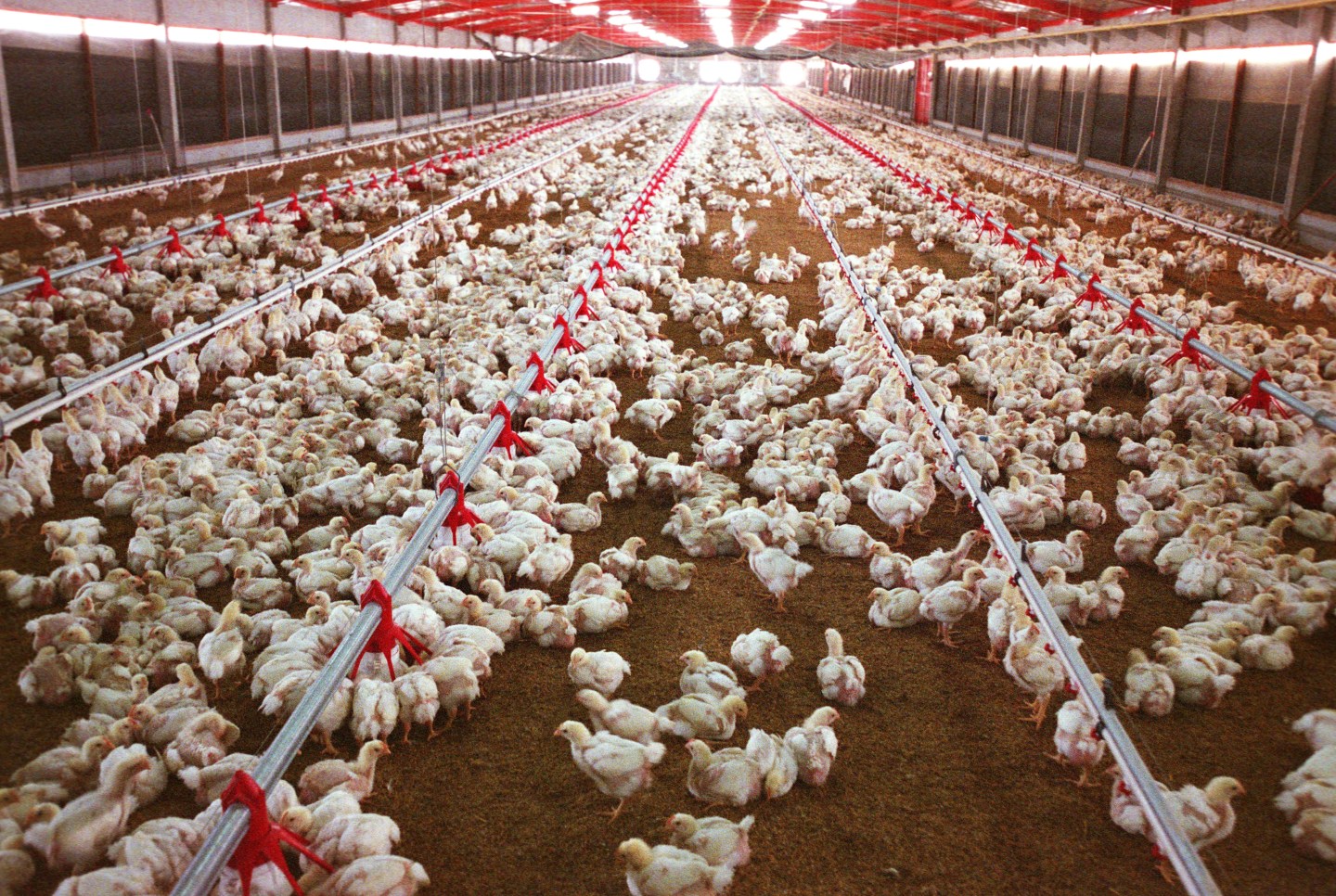 You may not have realized it, but you’ve been eating giant chickens.

The average broiler—meaning a chicken raised for meat rather than eggs—weighs about two and half times more today when it goes to market than it did in 1925. This is by no means a fluke. The poultry industry for years has been breeding its birds to get bigger faster, all while consuming less feed.

This narrative of efficiency fit very neatly into how consumers made their food choices over much of the last century when cost and abundance came above all else. That’s all changed, however, as a small but growing group of consumers has started to move animal welfare up on its list of food priorities.

The increased focus on welfare issues has made giant chickens—which the Humane Society of the U.S. says can suffer from leg disorders, weakened immune systems, and cardiovascular problems because of their size—a hot button issue. Companies like Whole Foods and major food service operators have responded in kind by committing to move to slower growing birds.

But now the National Chicken Council is pushing back, and it’s using another issue near and dear to the heart of the enlightened consumer in its defense: the environment.

A study released this week conducted by Eli Lilly’s Elanco Animal Health division at the request of the National Chicken Council found that if one-third of U.S. broilers switched to slower growing breeds, some 1.5 billion more chickens would be needed annually to produce the same level of meat. That would mean 33.5 billion pounds more feed, 7.6 million acres/year more land, 28.5 billion pounds of manure, and 5.1 billion additional gallons of water. The study estimated that this would come at an additional cost of $9 billion.

The move would have a “severe impact on reversing the progress” the industry has made in terms of improving the environmental footprint of chicken production, the group’s vice president of communications Tom Super told Fortune.

There are a few problems with the study that need to be flagged, including its backing by the poultry industry. It has not undergone academic peer review; the National Chicken Council did not release the study in full but rather an eight-page PowerPoint summarizing the data. I talked to the Humane Society of the U.S., which also called into question some of the assumptions the study made about mortality rates and density rates. The press release that came out with the study also contends that the “national broiler flock is as healthy as it has ever been.” However, mortality rates were actually at their lowest in 2012 and 2013. (“Mortality is only one indicator of overall health,” Super said in a follow up email.)

Josh Balk, vice president of farm animal protection at the Humane Society of the U.S., told Fortune that the meat production industry has long used the environmental impact argument to shield itself from allegations of animal welfare abuses—a strategy that he says “seems pretty disingenuous.”

“The industry is right—when you genetically program animals to the point where they can’t move, you use less resources,” he says.

But the fact that our animal welfare choices have consequences on the environment is real and unavoidable. And as I’ve found repeatedly in my reporting, these issues don’t always line up in the ways that we’d like. This came up for me most recently when reporting on McDonald’s decision to move to cage-free eggs.

Is it more humane for a bird to live in a cage or to experience liberty and die prematurely? And what is most humane is not always what is most productive—an especially relevant question as agriculture tries to feed a few more billion people by the middle of the century.

Of course, McDonald’s built its empire on a system of relentless efficiency. But “in the pursuit of efficiency we introduced a lot of animal welfare problems,” says David Fraser, a professor of animal welfare at the University of British Columbia. Today some of those practices are “looked at with a kind of horror.” Consumers may not quite articulate it, but they seem to yearn for a return to animal husbandry rather than animal science.

We as consumers always want it all: to taste good and be healthy, to be high quality and inexpensive, to be good for the environment and the animal. A lot of the time these things can be diametrically opposed, and grappling with that is not necessarily a bad thing. Doing so forces us to stop and face how incredibly complex and fragile our food systems are.