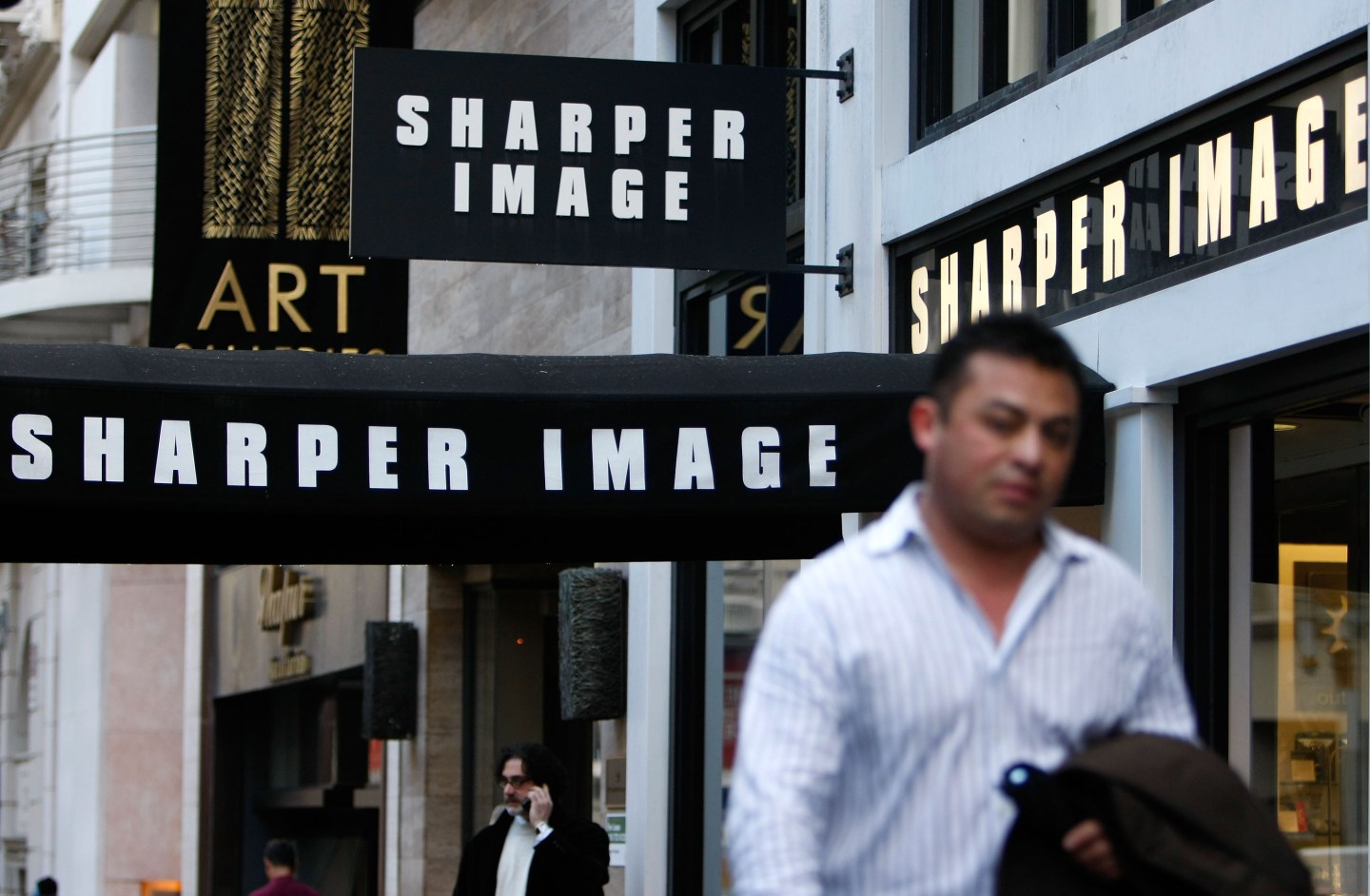 SAN FRANCISCO - FEBRUARY 20: People walk by a Sharper Image store February 20, 2008 in San Francisco, California. Sharper Image announced today that it has filed for bankruptcy protection after having disappointing earnings in 11 of the last 13 quarters, losing more than $135 million since early 2005. The retailer will close 90 stores in an effort to recoup losses. (Photo by Justin Sullivan/Getty Images)
Photo by Justin Sullivan Getty Images

Iconix Brand Group is selling off Sharper Image, a brand known for selling electronic gadgets and neck massagers, for $100 million in cash to a new owner that also recently acquired FAO Schwarz.

The new owner of Sharper Image is California-based ThreeSixty Group, which manufactures and distributes toys and other consumer products for over 70,000 retail stores across the country. Private-equity firm AEA Investors LP backs ThreeSixty Group, which generated headlines back in October when it acquired the FAO Schwarz brand from Toys “R” Us.

“As a licensee of the brand for almost ten years, we understand the power of the Sharper Image name,” Kirk McLean, co-founder of ThreeSixty Group, said in a statement. He added ThreeSixty will invest in the brand by bolstering product development and also by exploring new opportunities to expand into new geographies and product categories.

Iconix Brand Group said it would use proceeds from the deal, plus additional cash, to pay down about $115 million in debt. The deal is expected to close on Friday.

Founded in 1977 as a catalog retailer that sold jogging watches, Sharper Image grew to operate over 300 retail locations and even enjoyed a stint as a publicly traded company before it filed for bankruptcy protection in 2008. Shortly afterward, it closed the 86 remaining U.S. stores and the brand lived on as an online retailer and by selling Sharper Image-branded goods through major retailers like Best Buy (BBY) and Bed Bath & Beyond (BBBY). The Sharper Image brand had been owned by Iconix Brand since 2011, when the brand and intellectual property assets were acquired for $65.6 million in cash.

Most of the best sellers on Sharper Image’s website today skew toward the electronics category, including a smartphone photo printer, a hover board (remember those?), neck and foot massagers, and drones. Though the brand’s name still enjoys fairly broad recognition, the most high-profile headlines swirling around Sharper Image this year involved a short-lived Trump Steaks promotion in 2007, which caught the media’s attention when President-elect Donald Trump was running for office.

The brand’s new owner, ThreeSixty Group, has licensed the Sharper Image brand since 2008, making radio controlled drones, slippers, and home décor under the brand name. It was the largest licensee of the brand through that pact. The deal, like the transaction involving FAO Schwarz, represents a shift in thinking at ThreeSixty Group—it wants to own brands, not just sell items through licensee partnerships. ThreeSixty hints more deals could be on the way, as it has created a “brands” division to incorporate the Sharper Image, FAO Schwarz and “future acquired brands.”

When asked if Sharper Image and FAO Schwarz are brands of yesteryear—and thus less relevant today than they’ve been in the past, McLean disagrees with that view.

“We don’t think the brands are less relevant today. Sharper Image has probably the widest distribution it has ever enjoyed, as part of gifting programs at major retailers throughout the U.S.,” McLean said in an interview with Fortune. “Remember, at its peak, Sharper Image stores existed in about 180 malls and other locations. After nearly a decade of being a licensee, we’ve expanded that distribution to [over 30,000] doors in the U.S., creating much more exposure and consumer awareness.”

As with FAO Schwarz, ThreeSixty says it sees an opportunity to build some flagship stores for Sharper Image, moves that would represent a return to brick-and-mortar operations for both brands if they were to come to fruition. But for now, ThreeSixty says it is focused on marketing and advertising efforts to boost sales, as well as continued gains on distribution in the U.S. and opportunities abroad.