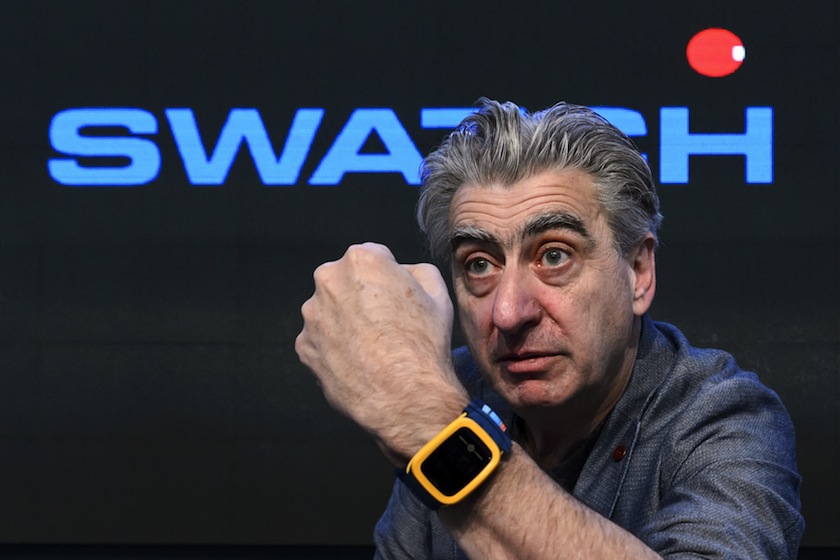 Then in several newspaper interviews in 2015 and in early 2016, chief executive Nick Hayek announced that he was taking the company in a new direction, launching a battery for electric vehicles with the goal of reaching $10-15 billion sales by 2020.

Investors called the plan expensive and unrealistic and with 2016 group sales predicted to be below last year’s 8.45 billion Swiss francs ($8.36 billion), inventory rising and Hayek refusing to announce savings that go beyond day-to-day efficiency efforts, they are questioning the group’s strategy.

Urs Beck, a fund manager at EFG Asset Management who has Swatch among his top 10 holdings, said Hayek had lost some credibility with investors because his forecasts had not always come true.

“There is little information on the Swatch battery. Hayek is known for giving fancy forecasts that often only materialize in the long term.”

Carine Menache, who runs a family investment company and has Swatch among her biggest holdings, said it had not been an easy ride, but she had nevertheless added to her position when the share price fell below 250 francs in August.

“It seems to be coming back, but hope is not an investment strategy,” she said, adding that Hayek was a good manager but should diversify more into luxury accessories and launch more limited editions or smartwatches.

“I have not heard that they were cutting costs, but they should probably do that.”

A spokesman for Swatch Group (SWGAY) declined to comment on criticism of the group’s strategy. He said the company was always managing costs, but was not planning to reduce production capacity now or in the future.

He pointed to an interview Hayek gave to Swiss newspaper Handelszeitung in October, in which he said: “We never just wait, we are always moving, but there is no reason to change our strategy. We always try to get better when it comes to efficiency and costs.”

The share price has fallen by 10% so far this year on top of a 21% drop last year. That compares to 7% and 19% declines respectively at rival Richemont. Swatch trades at a 15% discount to Richemont relative to 12-month forward earnings.

At over 20%, short interest in Swatch’s bearer shares is no longer at the peaks seen earlier this year, but still high, IHS Markit data shows, reflecting short sellers’ expectation that the shares will fall further.

The car battery has been jointly developed by Belenos Clean Power, in which Swatch holds a 51% stake, and the Swiss Federal Institute of Technology (ETH) in Zurich.

Car batteries are an attractive growth market if numbers of electric vehicles (EVs) explode to two-thirds of all cars by 2030 in wealthy cities, as several studies predict.

But it is also a highly competitive field, where heavyweights like Tesla (TSLA) and Panasonic (PCRFY) invest billions to gain scale and bring down costs for the currently dominating Lithium-ion batteries.

Prototypes are being produced at Swatch’s Renata battery unit near Basel but have not yet been presented to investors who are waiting for signs of progress.

“The timetable seems unrealistic to me. It is impossible to get from zero to 10 billion sales within just three years,” said Paul Wyser, owner of Swiss battery maker Wyon and a former Swatch Group manager who still owns some shares.

“Battery development takes time because of the comprehensive safety tests. You also need to see if it works over the long term.”

Technical details have also been scarce. Swatch has said that the new battery uses a vanadium pentoxide compound for the cathodes and a new electrolyte composition, giving it higher energy density, a longer life span, shorter recharging times and a better safety profile than conventional batteries.

Wyser said vanadium pentoxide was available and cheap, but was just one of many materials being tested for car batteries at the moment with an uncertain outcome.

Hayek, who declined to comment for this article, has said publicly that the battery could generate revenue of $10-15 billion by 2020, from use in cars, e-bikes, e-scooters and drones.

Others have questioned the cost associated with the project.

“You need to invest a lot before you get a return,” Vontobel analyst Rene Weber said.

Swatch has not provided any financial details on the project, but Hayek said in a newspaper interview that it signed a memorandum of understanding with Chinese car maker Geely in May and that the battery could be jointly produced in China from early 2017 if tests were successful.

But Geely sounded a cautious note: “This is one of many projects, we work with a lot of suppliers,” spokesman Ashley Sutcliffe told Reuters by phone.

“It’s early stages for both parties right now. Whether we’ll develop it together or invest in the project, that is all too far away.”

Beck said the outlook for the project was not clear.

“Investors do not have any figures, just this long-term fantasy that something could come of the cooperation with Geely…There are so many joint venture partners, that even if the project becomes a success, Swatch Group will probably only get a small share of it,” he said.

“It is when the cycle is at its lowest that you can gain market share and Swatch Group is well positioned for that,” he said.