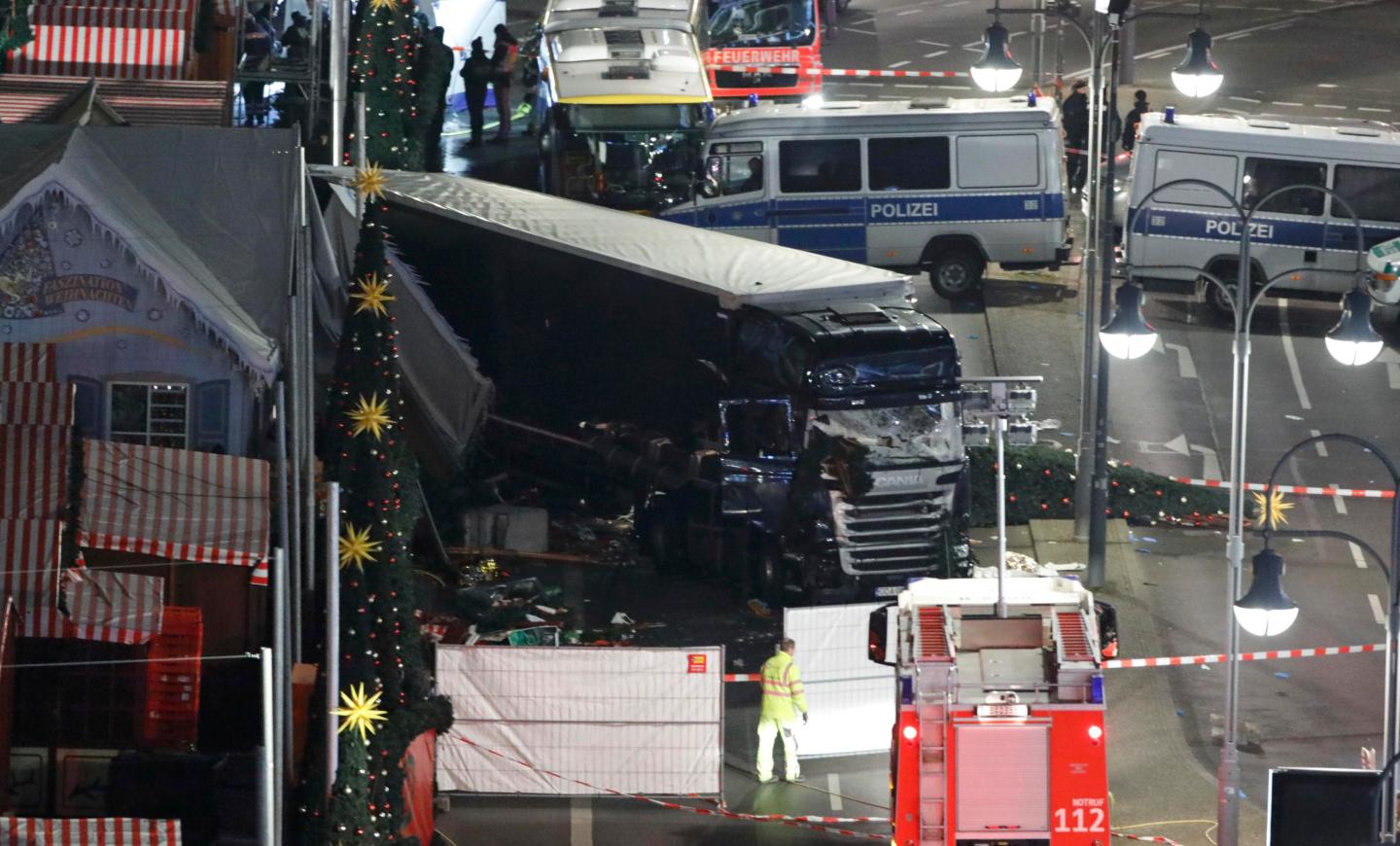 A general view shows the site where a truck ploughed through a crowd at a Christmas market on Breitscheidplatz square near the fashionable Kurfuerstendamm avenue in the west of Berlin, Germany, December 19, 2016 REUTERS/Pawel Kopczynski
Photograph by Pawel Kopczynski—Reuters

This story has been updated with developments as of 7:43 a.m. ET.

A man arrested on suspicion of killing 12 people by ploughing a truck into a crowded Berlin Christmas market was an asylum-seeker, the government said on Tuesday, as politicians in Germany and beyond demanded a crackdown on immigration.

The truck smashed into wooden huts serving mulled wine and sausages at the foot of the Kaiser Wilhelm memorial church, one of west Berlin’s most famous landmarks, on Monday evening. Forty-eight people were injured, 18 severely.

Interior Minister Thomas de Maiziere said the arrested man, who denied involvement, was probably from Pakistan and was in the process of applying for asylum. A security source said he was 23 years old, was known to police for committing minor offences, and had been staying at a refugee centre in the now defunct Tempelhof airport.

Chancellor Angela Merkel told reporters: “There is much we still do not know with sufficient certainty but we must, as things stand now, assume it was a terrorist attack.”

She added: “I know it would be especially hard for us all to bear if it were confirmed that the person who committed this act was someone who sought protection and asylum.”

In a surprise development, Die Welt newspaper later quoted security sources as saying the arrested man was not believed to be the perpetrator.

“We have the wrong man,” a police chief told the paper. “And therefore a new situation. The true perpetrator is still armed, at large and can cause fresh damage.”

Berlin’s police chief said it was not clear if the arrested man was the driver. Police said on Twitter: “The temporarily arrested suspect denies the offense. Therefore we are particularly alert. Please be also alert.”

The attack fueled immediate demands for a change to Merkel’s immigration policies, under which more than a million people fleeing conflict and poverty in the Middle East, Africa and elsewhere have arrived in Germany this year and last.

“We must say that we are in a state of war, although some people, who always only want to see good, do not want to see this,” said Klaus Bouillon, interior minister of the state of Saarland and a member of Merkel’s Christian Democrats (CDU).

Horst Seehofer, leader of the CDU’s Bavarian sister party, said: “We owe it to the victims, to those affected and to the whole population to rethink our immigration and security policy and to change it.”

The record influx has hit Merkel’s ratings as she prepares to run for a fourth term next year, and boosted support for the anti-immigrant Alternative for Germany (AfD). Senior AfD member Marcus Pretzell blamed Merkel for the attack on Twitter.

AfD leader Frauke Petry said Germany was no longer safe and “radical Islamic terrorism has struck in the heart of Germany”.

Newspaper Die Welt said the man behind the wheel had jumped out of the driver’s cab and run down the street towards the Tiergarten, a vast park in central Berlin. It said several witnesses phoned police to inform them, including one who chased the suspect while on the phone, constantly updating officials on his whereabouts.

The incident evoked memories of an attack in Nice, France in July when a Tunisian-born man drove a 19-ton truck along the beach front, mowing down people who had gathered to watch the fireworks on Bastille Day, killing 86 people. That was claimed by Islamic State.

The mass influx of migrants and refugees to the European Union has deeply divided its 28 members and fueled the rise of populist anti-immigration movements that hope to capitalize on public concerns next year in elections in France, Germany and the Netherlands.

Slovakia’s Prime Minister Robert Fico said the latest attack would change perceptions of migration. “I think that the cup of patience is beginning to spill over and Europe’s public will rightfully expect rather stronger measures,” he said.

Nigel Farage of Britain’s UK Independence Party tweeted: “Terrible news from Berlin but no surprise. Events like these will be the Merkel legacy.”

On Tuesday morning, investigators removed the black truck from the site for forensic examination. People left flowers at the scene and notes, one of which read: “Keep on living, Berliners!” One woman was crying as she stopped by the flowers.

Berlin police are investigating leads that the truck had been stolen from a construction site in Poland. Authorities said a Polish man was found shot dead inside the vehicle, but minister de Maiziere said no gun had yet been found.

Bild newspaper cited security sources as saying the suspect was named Naved B. and had arrived in Germany a year ago. In legal cases German officials routinely withhold the full name of suspects, using only an initial.

Local broadcaster rbb cited security sources as saying the man came to Germany via Passau, a city on the Austrian border, on Dec. 31, 2015.

Die Welt said police special forces stormed a hangar at Berlin’s defunct Tempelhof airport at around 4 a.m. (3:00 a.m. GMT). It said, without citing its sources, that the arrested man was registered there.

A refugee there who gave his name only as Ahmed told Reuters security guards had told him there was a raid at around 4 a.m.

Merkel and de Maiziere both stressed the need for Germans to remain uncowed by the attack.

“We do not want to live paralysed by the fear of evil,” said the chancellor, who discussed the attack by phone with U.S. President Barack Obama and convened a meeting of her security cabinet.

“Even if it is difficult in these hours, we will find the strength for the life we want to live in Germany – free, together and open.”

Other European countries said they were reviewing security.

Austrian Interior Minister Wolfgang Sobotka said he had told the heads of regional police forces to intensify surveillance measures. He called for biometric and fingerprint checks to be introduced along the Balkan route travelled by many migrants arriving in Europe, in order to better control foreign jihadist fighters’ movements.

London police said they were reviewing their plans for protecting public events over the festive period.

Flags will be hung at half-mast around Germany on Tuesday and Berlin Christmas markets were closed for the day out of respect. The German soccer league announced a minute’s silence at all matches on Tuesday and Wednesday, at which players will wear black ribbons.

Manfred Weber, head of the centre-right European People’s Party, said: “It’s not an attack on a country; it’s an attack on our way of life, on the free society in which we are allowed to live.”