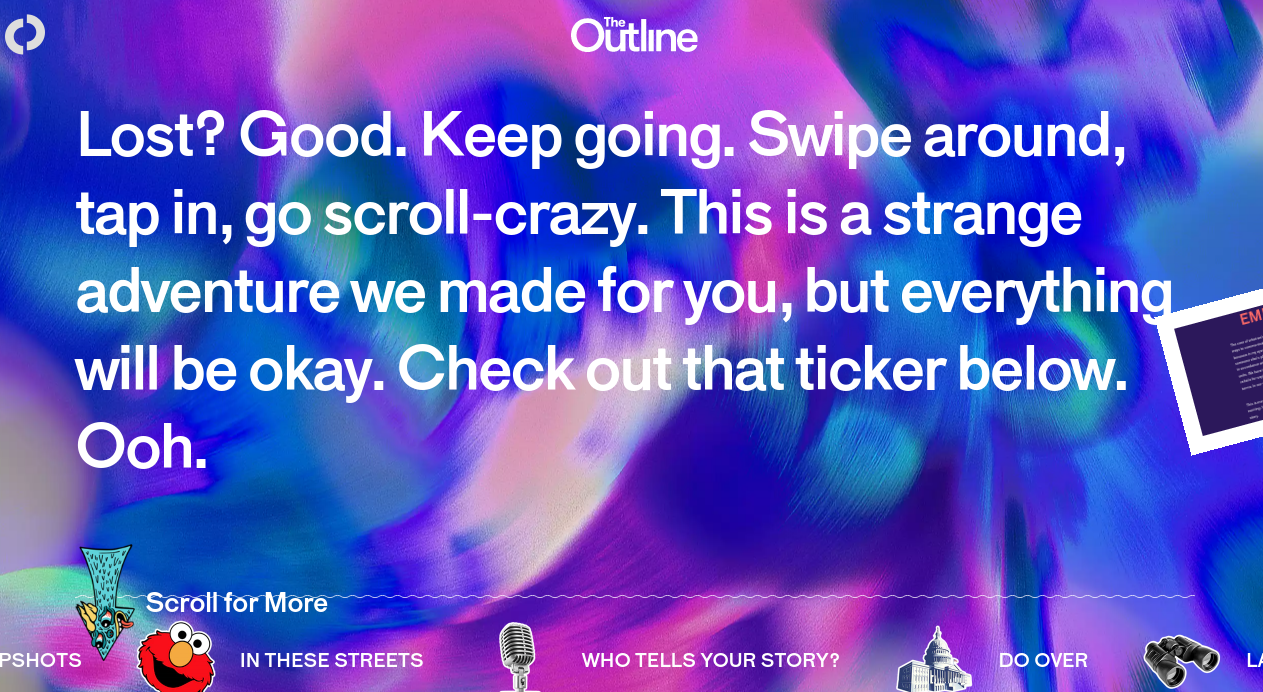 The Outline, a new-media venture that former Bloomberg Businessweek editor Joshua Topolsky has been working on since he left the financial information giant in June of last year, launched officially on Monday. So far, it has been getting some good—and some not-so-good—reviews.

The most striking thing is the design of the app. Although The Outline has a website, it is clearly designed to be mobile-first, and it uses a Snapchat or Tinder-like swipe metaphor as a way of navigating through the stories and items within the app. It also has cartoon characters who pop up to help you figure out where to go.

The eye-catching design elements—which some reviewers described as “wacky,” as well as “incredibly hard to read”—are not really a surprise as one of Topolsky’s last moves at Bloomberg was a redesign that was similarly colorful, but apparently was not well received by some at the company.

Zero new thoughts here on @outline, except I FEEL TOO OLD FOR THIS SITE EXPERIENCE https://t.co/SJI5KNxphA pic.twitter.com/DMUcLcw7NO

In an opening essay, Topolsky said The Outline is “a new kind of publication for a new kind of human.” The core of the new startup involves embracing technology as a catalyst for better ways to communicate, he said, and doing so in ways that make sense for the information being delivered.

“If we’re just words on someone else’s platform, video done the way they want it, keywords arranged in accordance with an algorithm… that’s not real creation,” Topolsky wrote. “That’s about moving units.”

Although many of the new app’s design aspects are unusual, however, the core of The Outline business model is not. The company raised $5 million in venture funding from a number of backers, including RRE Ventures, and its primary method of generating revenue is advertising.

“We have lots of other interesting ideas knocking around, but that is our primary driver,” Topolsky said in a Twitter (TWTR) conversation with Fortune.

The media right now has a million problems, and not 1 of them is "design." It's great to see great design. New busnss model would be better

The ads are not the usual web-style banners or “programmatic” filler generated by ad networks, however. There will be no standard ad placements, according to chief revenue officer Amanda Hale. All ads are designed to be full-screen and highly visual, like magazine ads.

“There is this huge unexplored space between the banner and thousand word pieces produced by the Times T Studio,” Hale told the Wall Street Journal. “We want all of our ads to look art directed.”

Cadillac, Method, and Under Armour Sportswear (UA) have signed on as key sponsors, and the plan is to limit the total to maybe a dozen per year, Topolsky told the Journal.

"This is about the swipe not the scroll.” Love it! It's on the fine line between genius and bullshit. Only safe place to be in media today. https://t.co/bzdNEp4E8t

Flipboard, the news-reading app designed for tablets and phones, has also focused on visually-rich, magazine-style ads since it launched in 2010, with a “flip” browsing metaphor that is somewhat similar to the swipe that The Outline uses. Swiping in The Outline app is combined with another design element that the company calls a “stack.” In articles that include a series of photos, for example—or for ads that do the same—they appear as individual “cards” stacked up on top of each other, which users can swipe through.

Although the card-stack metaphor in computing and information design arguably goes back to Apple’s (AAPL) early Hypercard feature, one of the first to implement it as a way of browsing news content was Vox, the “explainer” site that former Washington Post columnist Ezra Klein launched in 2014 as part of Vox Media.

At one point, Klein and his co-founder Melissa Bell talked about licensing the card-stack visual metaphor and technology to other media companies, and then last year they created an embeddable version of the stacks, so that other sites could include Vox background info in their articles. Not much ever came of that initiative, however.

Earlier this year, both Klein and Bell admitted that many of their hopes for the card-stack model—which they initially saw as a core feature of what Vox had to offer—had not come to pass.

When it comes to the new company’s interest in smart aggregation, The Outline’s approach also sounds somewhat reminiscent of Circa, a new-media startup that launched in 2012 with a mobile-first approach that involved aggregation and curation of information from other sources.

Circa eventually ran out of funding and was acquired by Sinclair Broadcast Group, the owner of a chain of TV and radio stations. The company relaunched something by the same name earlier this year, but rather than smart aggregation it focuses primarily on short-form video content.