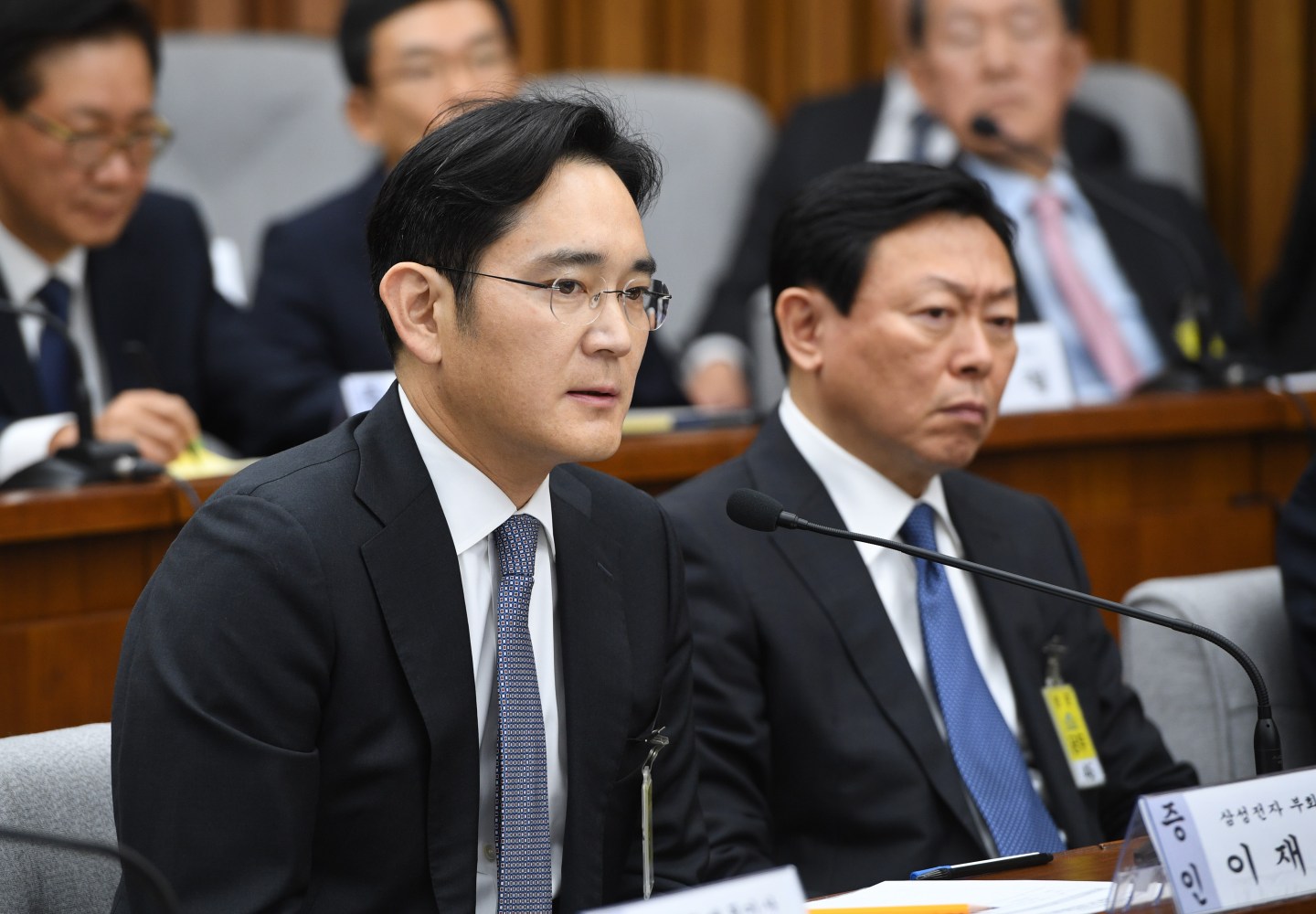 The heads of South Korea’s top conglomerates including the Samsung (SSNLF) and Lotte Groups were questioned on Tuesday in an unprecedented parliamentary hearing into the political scandal that appears poised to bring down President Park Geun-hye.

A parliamentary panel is investigating whether the conglomerates, known as chaebol, were pressured by Park or a friend and aide to give money to two non-profit foundations backing Park’s policies in exchange for special treatment.

Samsung Group leader Jay Y. Lee, who sat at the center of the witness table, said Park had asked him during a one-on-one meeting for support for boosting cultural and sports-related developments but did not specifically request money.

“There are often requests from various parts of society including for culture and sports. We have never contributed seeking quid pro quo. This case was the same,” Lee said, adding that he was embarrassed by the situation and was appearing with a “heavy heart.”

Samsung donated 20.4 billion won ($17.46 million) to the two foundations, the most of any group, and prosecutors raided its offices last month.

The corporate titans ran a gauntlet of media and protestors as they entered the National Assembly building that sits along the southern bank of the Han River.

None of the chaebol, which are among 53 corporate groups that gave money to the foundations, has been accused of any wrongdoing in the case, but a protestor outside the parliamentary building could be seen holding a sign saying: “Arrest the chaebol chiefs.”

Park faces an impeachment vote on Friday, setting the stage for her to be the first democratically elected South Korean leader to leave office early in disgrace. Huge demonstrations have called for her to quit and her approval rating has plunged to just 4%.

Last week she asked parliament to find a way and a time for her to step down, an offer that was rejected by the opposition Democratic Party as a stalling tactic. Media reports said she may make a speech this week offering to step down in April, a recommendation made by her conservative Saenuri Party.

Middle school students who were leaving the parliamentary building as chaebol bosses arrived chanted “Park Geun-hye step down!” and a scuffle between metal workers’ union members and men who appeared to be guards broke out when Hyundai Motor Group (HYMTF) Chairman Chung Mong-koo, 78, arrived with his son and presumed successor, Vice Chairman Chung Eui-sun.

It is the first time such a large group of major Korean corporate chieftains has appeared for a parliamentary hearing.

“This will be a good opportunity to express corporations’ position,” the chairman of the Hanwha Group, Kim Seung-youn, told reporters on his way into the building.

Each witness was allowed to bring one lawyer and one company official to the hearing, and, if needed, an aide for medical support, according to a lawmaker’s office.