Trump’s Carrier Deal Is Not a Victory for U.S. Manufacturing 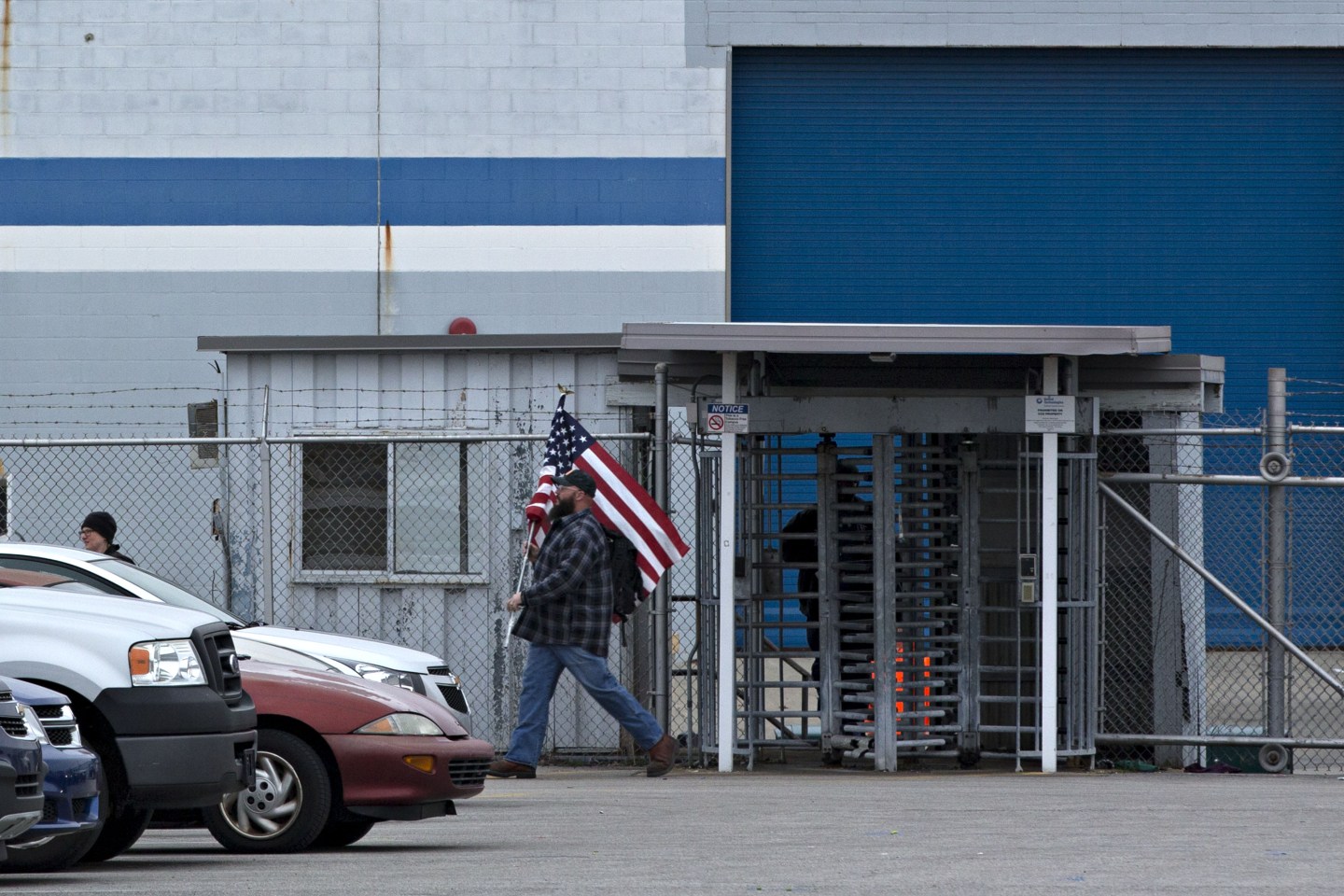 A man carries an American flag while leaving an employee entrance outside a Carrier Corp. facility in Indianapolis, Indiana, U.S., on Thursday, Dec. 1, 2016. President-elect Donald Trump, who spoke at the plant today, said he called the top executive of United Technologies Corp., shortly after his election and told him not to close a Carrier factory in Indianapolis that became a symbol of the Republican's outsider campaign for the White House. Photographer: Daniel Acker/Bloomberg via Getty Images
Daniel Acker—Bloomberg via Getty Images

With great fanfare, Donald Trump announced last week that Carrier Corp. will no longer move 1,000 jobs from Indiana to Mexico. The decision has been ascribed to some combination of the persuasive powers of the president-elect, about $7 million in tax breaks from the state of Indiana, and implicit threats to the valuable business Carrier’s parent company United Technologies, a major military contractor, conducts with the federal government. And now, Trump plans to apply similar pressure to other companies looking to outsource such as Rexnord Corp., which has announced its intention to move its industrial bearings production from Indiana to Mexico as well.

From a political standpoint, this sounds like a remarkable success story. Even before taking office, Trump has fulfilled his campaign promise to save U.S. manufacturing jobs. But if this case sets a precedent for how Trump’s economic policies are going to work, it heralds a dangerous shift from an economic system based on rules toward an economic system based on deals. Trump may well have mastered the art of the deal when it comes to business, but applied to the economy as a whole, the approach would not only undermine the foundations of our economic system but actually do little to reverse the declines in the opportunities for U.S. manufacturing workers.

The basis for the U.S. economic system is private enterprise, because the government has neither the knowledge nor the incentives to make business decisions that in the long run will achieve economic efficiency and growth. To be sure, there is a role for the government in setting the laws, rules, and regulations that broadly steer the economy in the right direction. But as long as private firms follow these rules, they should be left to make their own decisions, reaping the rewards of success and the costs of failure. However, when the government oversteps these bounds and threatens or bribes private firms to do its bidding, there is bound to be trouble, as the distinction between what is public and what is private becomes blurred.

None of the actions that have induced Carrier to remain in the U.S. are good policy. First, simply because the president-elect does not like United Technologies’ business decisions does not justify his issuing of veiled threats to blackball the company for actions that are perfectly legal, and this constitutes an unwarranted exercise of government power. Second, giving special tax breaks to a company when it threatens to leave the U.S. will hold the government hostage to other companies who make similar threats. And third, if Carrier makes decisions that lead to financial distress as a result of acting on Trump’s advice, the federal government will inevitably face pressures to provide Carrier with additional assistance.

Another fundamental principle of our economic system is that policies should apply equally to all. Aside from the fact that Carrier’s plans were made during the presidential campaign and its parent company is vulnerable to political pressures, what exactly makes Carrier worthy of being treated differently from the other multinational firms that employ 23 million Americans?

One possible answer is that Carrier is just the first example. Trump promised Thursday that from now on, “Companies are not going to leave the U.S. anymore without consequences.” In particular, he has threatened to place punitive tariffs on the imported products that result from relocating production. But applying such policies would be impractical and illegal.

To be sure, there are cases of plant relocation that are clear-cut: For example, if a firm relocates lock, stock, and barrel from the U.S. to another country. But most multinational companies can accomplish the same result more subtly by reducing employment in the U.S. and at the same time expanding abroad. Alternatively, they could simply liquidate a company in the U.S. and invest in a different company in Mexico. Would the president really spend his precious time embroiled in the specific business decisions of individual U.S. companies?

Moreover, threatening retaliation with tariffs on products originating from particular companies in foreign countries is illegal under trade agreements to which the U.S. is bound. Under World Trade Organization (WTO) rules, tariffs on the same product from all WTO members cannot be discriminatory. And in addition, U.S. tariffs, which are generally low, cannot be raised above the maximum rates to which the U.S. has agreed with the trade organization. Were the U.S to raise tariffs, foreigners would be entitled under WTO rules to retaliate by refusing to import an equivalent amount of U.S. products. Should the U.S. withdraw from the WTO, as Trump threatened to do during the presidential campaign, there would be no limit on the level of tariffs other countries could impose on American products.

The Carrier case has political resonance because there is no question that U.S. manufacturing employment has been devastated since 1999. Indeed, between that year and 2013, the manufacturing sector lost 5.3 million jobs. But Trump’s claim is false that offshoring to Mexico by U.S. manufacturing firms has been a significant reason for that loss. Plant closures are very painful for communities and workers who lose their jobs, and it is not hard to come up with examples of firms that have moved, but Mexican offshoring’s contribution to the loss of U.S. manufacturing jobs has been relatively small. According to the Bureau of Economic Analysis, employment in the Mexican manufacturing plants owned by U.S. firms only increased from 520,000 in 1999 to 572,000 in 2013.

Suppose, though, that Trump is somehow spectacularly successful in his dealmaking and eliminates the U.S. trade deficit in manufactured goods through better trade deals and forcing firms to remain in the country. Data developed by the Organisation for Economic Co-operation and Development (OECD) indicates that the share of Americans working in manufacturing would only rise from roughly 9% to 10%. This is because trade and offshoring are not the major reasons for the erosion in manufacturing employment growth. Rapid technological advances in manufacturing now require fewer and more skilled workers to produce them. And while improved technology has reduced goods prices, the response of Americans has been to spend the money they save on cheaper goods and by spending more on services.

President Theodore Roosevelt spoke of the White House as offering a bully pulpit that could be used by the president to persuade the people. Trump is using the presidency as a bully pulpit in a different and more threatening sense, which will not only be damaging to our economic system, but unlikely to produce the results that many of his supporters appear to expect.

Robert Z. Lawrence is the Albert L. Williams professor of international trade and investment at the Harvard Kennedy School and a non-resident senior fellow at the Peterson Institute of International Economics.