The New York Times Has 132,000 Reasons to Thank Donald Trump 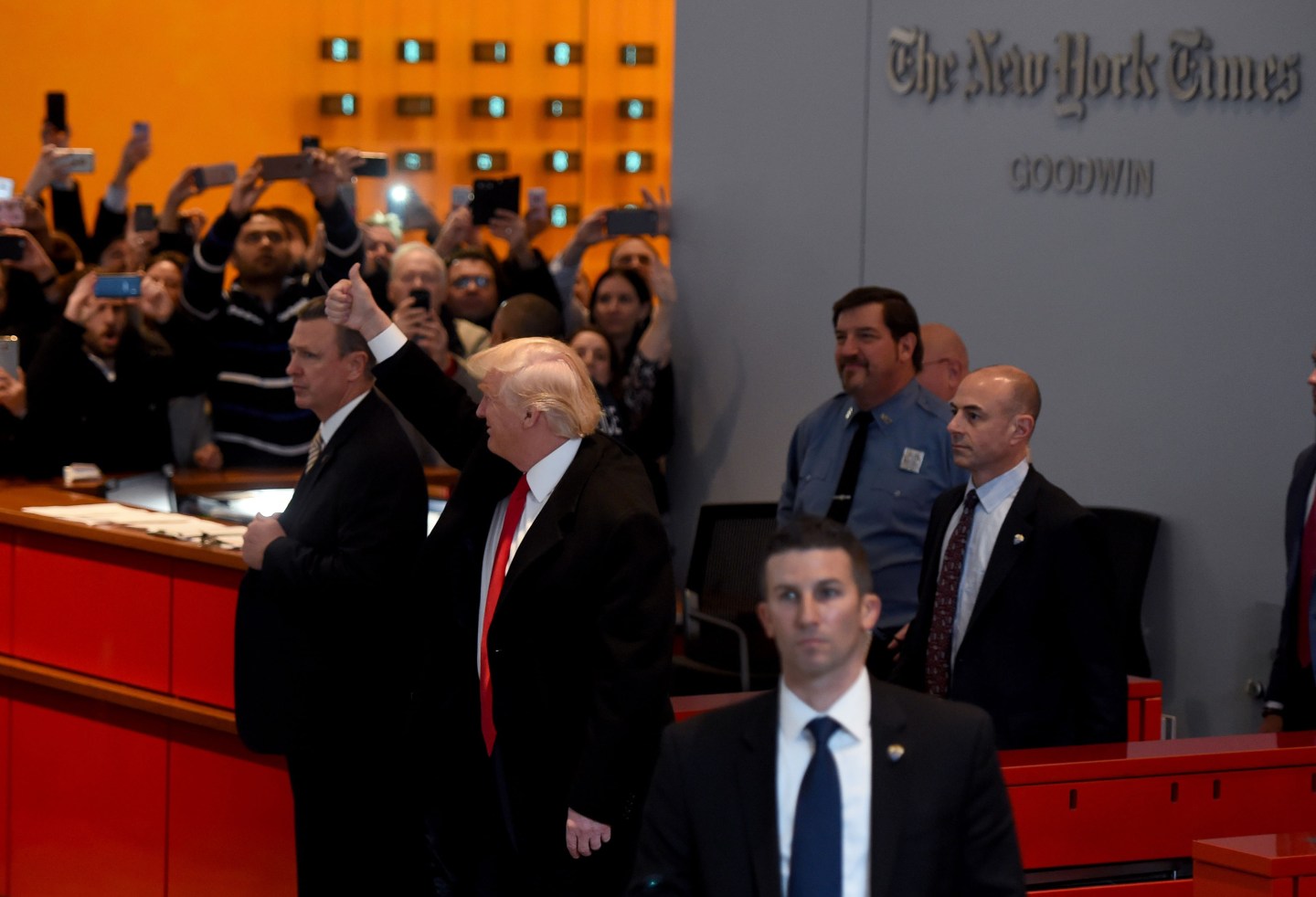 America’s journalism industry has been under siege. Not only are there widespread layoffs and declining ad revenues, but its very mission—to inform the public—has come under attack by the President-elect Donald Trump. Trump regularly denounces the press as “dishonest” and “disgusting” and has even suggested that he’d like to “open up” the country’s libel laws to make it easier to sue journalists.

But amid all of this gloom, the journalism industry has seen one ray of sunshine: newspaper subscriptions are on the rise at major publications like The New York Times and Wall Street Journal.

And, it seems that Donald Trump’s victory could be helping to spur the growth.

The New York Times confirmed to Fortune on Tuesday that the newspaper saw an increase of roughly 132,000 paid subscriptions to its print and digital editions over the period between the Nov. 8 election and this past Saturday. Times spokeswoman Eileen Murphy said that increase (first reported on Tuesday by CNBC) “represents a dramatic rate of growth”—10-times more than during the same period last year and the paper’s largest two-and-a-half week increase since introducing its digital pay model in 2011.

The Times isn’t alone, either, as The Wall Street Journal said it saw a 300% spike in new subscribers on Nov. 9, the day after the election. And, CNBC added that Tronc—formerly known as the Tribune Publishing Company—said its portfolio of publications have seen an average bump of 29% in paid digital subscriptions since the election.

The spike comes as Trump continues his regular bashing of the mainstream media in general while he cozies up to the far right, alt-right media, which are unabashedly pro-Trump. Many circulate wild and fact-free conspiracy theories.

The newspaper subscriber growth also comes as the media turns its focus toward the proliferation of “fake news” that ran rampant on various social media platforms throughout the election. After Trump’s victory, HBO comedian John Oliver encouraged viewers of his show, Last Week Tonight, to avoid bogus news sources and support highly-respected media outlets such as the Times, The Washington Post, and non-profit news source ProPublica as well as smaller, regional newspapers. ProPublica reportedly saw a surge of donations in the wake of Oliver’s call to arms.

Washington Post spokeswoman Shani George told Fortune that she could not provide specific subscriber figures, but she said the paper has seen “a steady increase in subscriptions over the course of this year.”

The subscriber spike comes at a much-need time for a journalism industry that is dealing with its latest financial issues, as global newspaper print advertising spending is expected to dip nearly 9% this year. The advertising revenue trouble has spurred further rounds of layoffs even at the largest publications, including recent reports that the News Corp.-owned Journal will trim its staff as it consolidates its print edition. The Times and newspaper publishing giant Gannett have also been subject to reports of widespread layoffs this year.