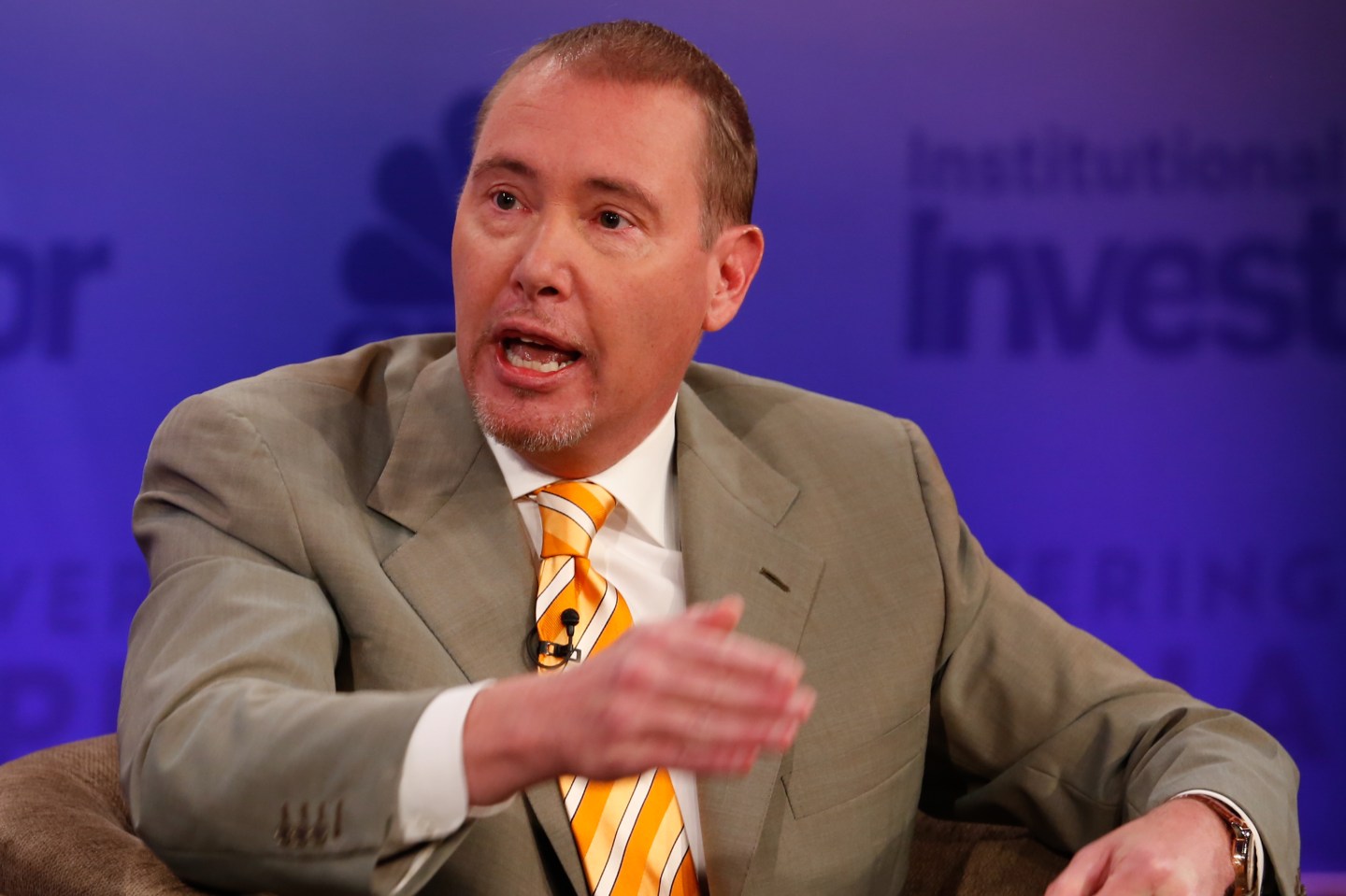 The so-called “Bond King” correctly predicted Donald Trump would win the election—though he never said that would be a good thing.

Now, DoubleLine CEO Jeffrey Gundlach is predicting that Trump’s victory will spark a bear market in Facebook, Amazon, Netflix and Google stocks. Those tech companies—known as FANG stocks for short—are in the greatest danger after Trump beat Hillary Clinton to the White House, according to Gundlach.

“I would avoid the FANGs in a big way,” Gundlach warned Tuesday during one of his regular investor presentations, a week after the election. “The basic fundamental underpinnings of FANGs disappeared one week ago today,” he said. What’s left of their support will go on January 20th—Inauguration Day–when Trump will be sworn in as president, he added.

Gundlach, a renowned bond investor who now oversees more than $100 billion in assets, was one of the earliest to foresee that Trump would be elected president. He first made that prediction back in February, when many were not even taking the candidate seriously. This was the 12th election in a row since 1972 that Gundlach has called in advance, and the first he claims to have successfully forecasted before the primaries had begun.

But even though Gundlach was right about Trump, he still thinks the President-elect spells doom for the market. “The Trump win is economically negative in the near term,” Gundlach said, noting that investors are underestimating how much the “despair of Clinton supporters” will be a drag on consumer spending (with the exception of “liquor sales,” he quipped). After economists falsely warned that Trump’s victory would cause a stock market crash, investors have now gotten too caught up “in this very bizarre 180 that Trump is the best thing ever for the stock market,” Gundlach said, predicting that “we’re going to see some backlash of negativity.”

The pain has already hit the FANG stocks, which Gundlach thinks could be a more accurate bellwether of the carnage to come. Indeed, while the S&P 500 has risen almost 2% and the Dow is up 3%—setting a new record high—since the election, Facebook (FB) stock has plunged more than 6%. Netflix (NFLX) has fallen even further, down more than 7%, while Amazon (AMZN) stock has declined 5% and shares of Google parent Alphabet (GOOGL) have dropped 4%.

Indeed, those stocks had been on a tear earlier this year, with Facebook shares up as much as 25% a couple of weeks before the election—but then the FANG stocks suddenly “rolled over,” Gundlach said, falling 10% as a group as the vote approached and the presidential race got narrower. While investors were more closely watching other assets such as the Mexican peso as an indicator of who would win the election, they should have been looking at the tech stocks, which turned out to be a very close proxy for a Hillary Clinton presidency: “Because of the actions of the FANGs, I think we can say the market was predicting that Trump would win,” Gundlach said.

Experts have debated how Trump’s policies might impact Silicon Valley technology companies. But Gundlach’s theory that tech stocks lost along with Hillary Clinton on election day is somewhat more simplistic than that. “It’s not a good idea to bet on things that were correlated to the regimes that have been defeated,” he said.

Gundlach’s bearish outlook for the FANG stocks is in part rooted in fundamental metrics. He doesn’t think stocks will go higher even if bonds continue their massive post-election selloff, whereas a bond market rebound could send stocks swiftly tumbling. The result: “I see a real lose-lose setup for risk assets,” Gundlach said. And the FANG stocks are riskier than most in that “they’re incredibly expensive,” he said; Netflix, for one, trades at more than 300 times earnings. The respective multiples for Facebook and Alphabet are also challenging, at 45 and 28 on a trailing, twelve-month basis.

But there’s also a very straightforward reason that Gundlach is pessimistic on the four tech companies: Their top executives were critical of Trump, and now he’s become their president too. In what Gundlach called an “example of poetic justice,” Silicon Valley, with social media services including Facebook as well as Twitter (TWTR), helped carry Trump to victory—and now their shareholders are paying the price. “Those companies have been Trump-bashing,” Gundlach said. “It’s ironic that people who hate Trump the most are responsible for Trump winning the White House.”

This spring, Facebook CEO Mark Zuckerberg attacked Trump’s anti-immigration and restrictive trade policies, though he did not mention the candidate by name. Amazon CEO Jeff Bezos, who also owns the Washington Post, responded in May to Trump’s accusations that he was controlling the newspaper’s coverage, saying, “This is not an appropriate way for a presidential candidate to behave.”

“Trump would destroy much of what is great about America,” Netflix CEO Reed Hastings added when he endorsed Hillary Clinton in June. Ruth Porat, CFO of Google’s parent company Alphabet, as well as the tech giant’s executive chairman Eric Schmidt, openly supported Clinton.

One explanation for the Trump effect on FANG stocks is that the President-elect opposes policies and principles that those companies favor, from unbreakable encryption to net neutrality to immigration reform that would help Silicon Valley hire more high-skilled foreign workers.

But Gundlach said his FANG thesis was largely based on his belief that the companies were Clinton darlings, relics of the “old machine,” an era that has now ended: “It’s just so obvious to me,” he added. That implies another, more sinister interpretation of the FANGs’ recent selloff: The market thinks Trump may actively retaliate against these companies by pushing regulation aimed at hurting their businesses.

Seem like a stretch? So did Trump winning when Gundlach said it would happen—and that prediction came true.