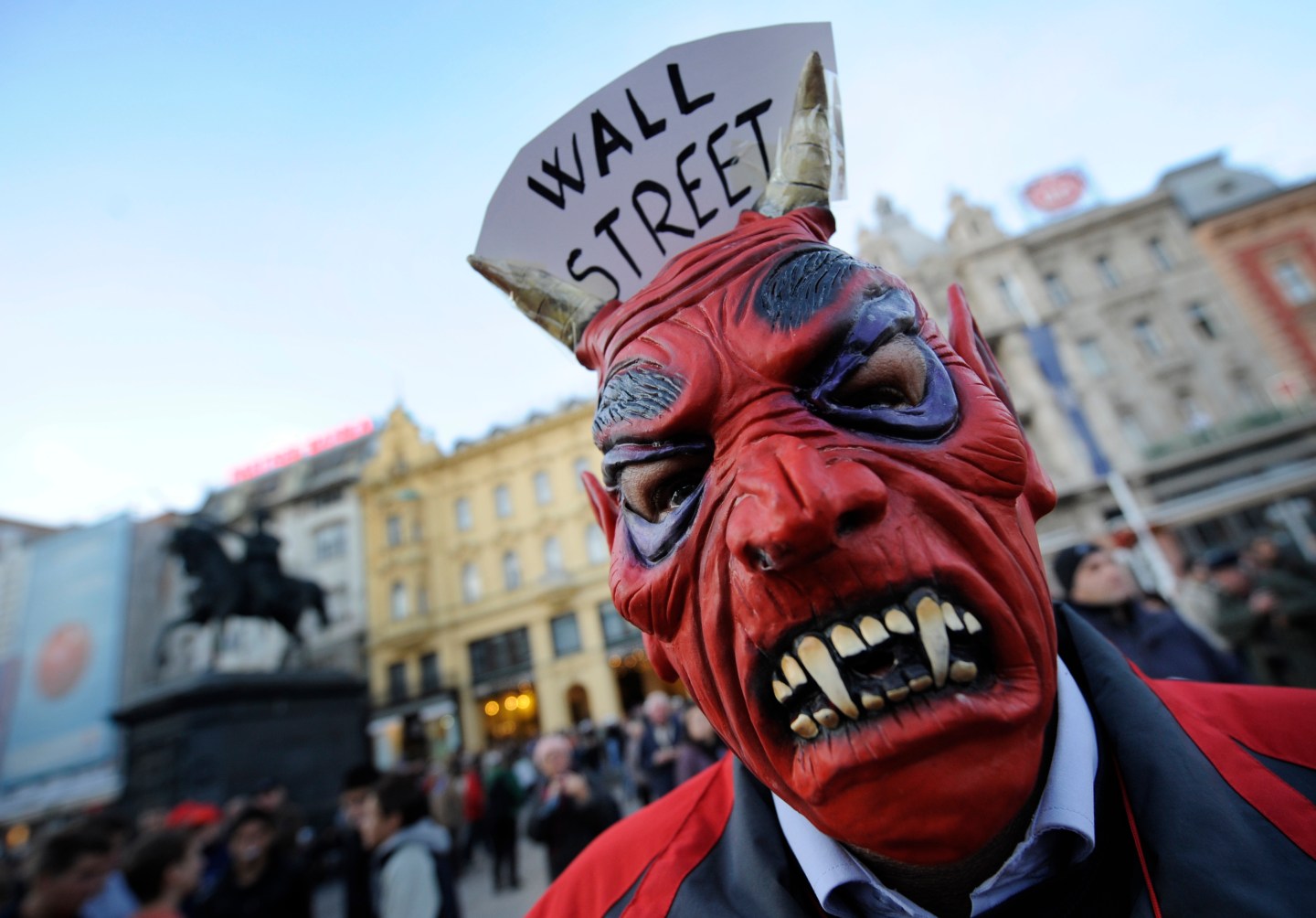 A protester wears a vampire mask with "Wall Street" sign on October 15, 2011 during a demonstrations in Zagreb. Some 3,000 demonstrators gathered on October 15 on the main city square for a protest against corporate greed, corruption and influence of capital on the politics, joining a series of protests around the world. AFP PHOTO / HRVOJE POLAN (Photo credit should read HRVOJE POLAN/AFP/Getty Images)
HRVOJE POLAN AFP/Getty Images

When the market’s closing bell rung for the final time in 2015, few stocks held more promise for the new year than a certain four technology companies. Dubbed with the acronym FANG, Internet companies Facebook (FB), Amazon (AMZN), Netflix (NFLX) and Alphabet, which was still named Google when the acronym was dubbed, delivered stellar performances in a year when the overall market’s returns were remarkable only in their flatness. The S&P 500 ended 2015 down less than 1%.

Averaging returns of 83% between the four of them, the FANG stocks seemed to drive so much of the market’s positive performance last year that investors hailed them as portfolio saviors—while also worrying how much worse it would be if the market, well, lost its teeth. Indeed, all the FANG stocks were among the top 10 contributors to the S&P 500’s 2015 returns. Netflix, up 134%, was the S&P 500’s top performer, while Amazon, not far behind, returned about 118%. Alphabet (GOOGL) rose 47%. And Facebook was up 34%.

“A concern of mine was the narrow breadth. . .when you have only the few big, popular names doing well,” Liz Ann Sonders, chief investment strategist for Schwab, told Fortune recently. “In a war, if only the generals are at the front line, it’s not a very strong front line.”

This year, though, investors are grappling with that very real prospect of a toothless market—or to use Sonders’ battlefield analogy, a fight with few soldiers still standing. The four stocks whose momentum helped carry the market last year are some of the heaviest bleeders in the carnage that has marked 2016 so far.

Of the FANG stocks, Netflix fared best in the first week of the year, but it’s still down 2.6% and the only one of the four to outperform the S&P 500, which has sank nearly 6% this year. The returns of the other three put them in the bottom half of the S&P year to date (only Alphabet’s Class C shares narrowly make the top half), with Amazon (down 10.2%) ranking among the index’s worst 75 performers.

And just as the mighty FANG stocks helped buoy the market last year, investors are worrying that they may now have a major hand in dragging it down: Amazon, Facebook and Alphabet are among the 15 laggards that have contributed most to the S&P 500’s declines this year. (Netflix has had minimal impact in swaying the index.) The stock most to blame for weighing down the index’s returns? That would be Apple (AAPL), whose nearly 8% fall has shaved the most off the S&P 500.

What’s more, many investors were already expecting the high-flying FANG stocks to fall more in such a stock selloff simply because their valuations have risen along with their prices, and expensive stocks tend to be more vulnerable to market panics. Amazon shares trade at more than 900 times the company’s earnings over the last year, while Netflix stock is currently priced at roughly 307 times earnings, and Facebook trades at 100 times earnings. Alphabet’s price-to-earnings ratio is about double the S&P 500 average of 17.

Still, it’s hard to make predictions when the market has open a little more than a week in 2016—a week that happened to be the market’s worst first week of a year in history. And for all the credit and blame that investors have assigned to the FANG stocks, some investors argue that their importance has been exaggerated, and that the four companies’ returns have yet to make or break the performance of the S&P 500 as a whole. In a blog post Monday titled, “SNAFU: Situation Normal, All-FANGed Up,” Cliff Asness, founder and chief investment officer of top hedge fund firm AQR Capital Management, attempted to debunk the hype and fear around the FANG stocks.

To get an idea of how the S&P 500 would have performed without the FANG stocks, Asness analyzed the effect of removing up to 20 of the stocks with the greatest positive impact on the index’s returns. (As the S&P 500 is weighted based on companies’ market value, Asness adjusted the weightings of the remaining stocks accordingly.) If you removed the 10 stocks that were the biggest drivers of the index’s gains in 2015, including the FANG stocks (along with Microsoft (MSFT), General Electric (GE), Home Depot (HD), Starbucks (SBUX) and McDonald’s (MCD)), the S&P 500 would have performed 3.7% worse.

In an average year over the past two decades, though, removing the 10 stocks with the biggest impact on returns would have made the overall S&P 500 perform 4.1% worse, Asness found. “It is true that a few stocks bailed out the cap-weighted index last year,” Asness wrote in his post. “But it’s also true in most years.”

If the market really were getting dangerously narrow, overall returns would depend a lot more on those top index-moving stocks, Asness pointed out. Consider 1999 for example: Had you removed the 10 biggest contributors to performance, the S&P 500 would have performed 11% worse. And at the height of the tech bubble at the time, Sonders adds, those same stocks also drove the market’s average valuation to dangerous heights—whereas the S&P 500’s current P/E ratio, based on the past 12 months of earnings, of 17 is fairly normal historically speaking.

The bottom line: Without the FANG stocks’ incredible run last year, S&P 500 investors would only have missed out on a few percentage points of performance—hardly a devastating occurrence. As for the FANG stocks’ impact on the S&P’s returns in 2016 so far, Asness didn’t analyze that, but they’re unlikely to have made much of a dent: The average S&P 500 stock performance is the same whether or not you include the four Internet companies.

So while FANG stocks didn’t offer redemption, they probably won’t suck your blood either.