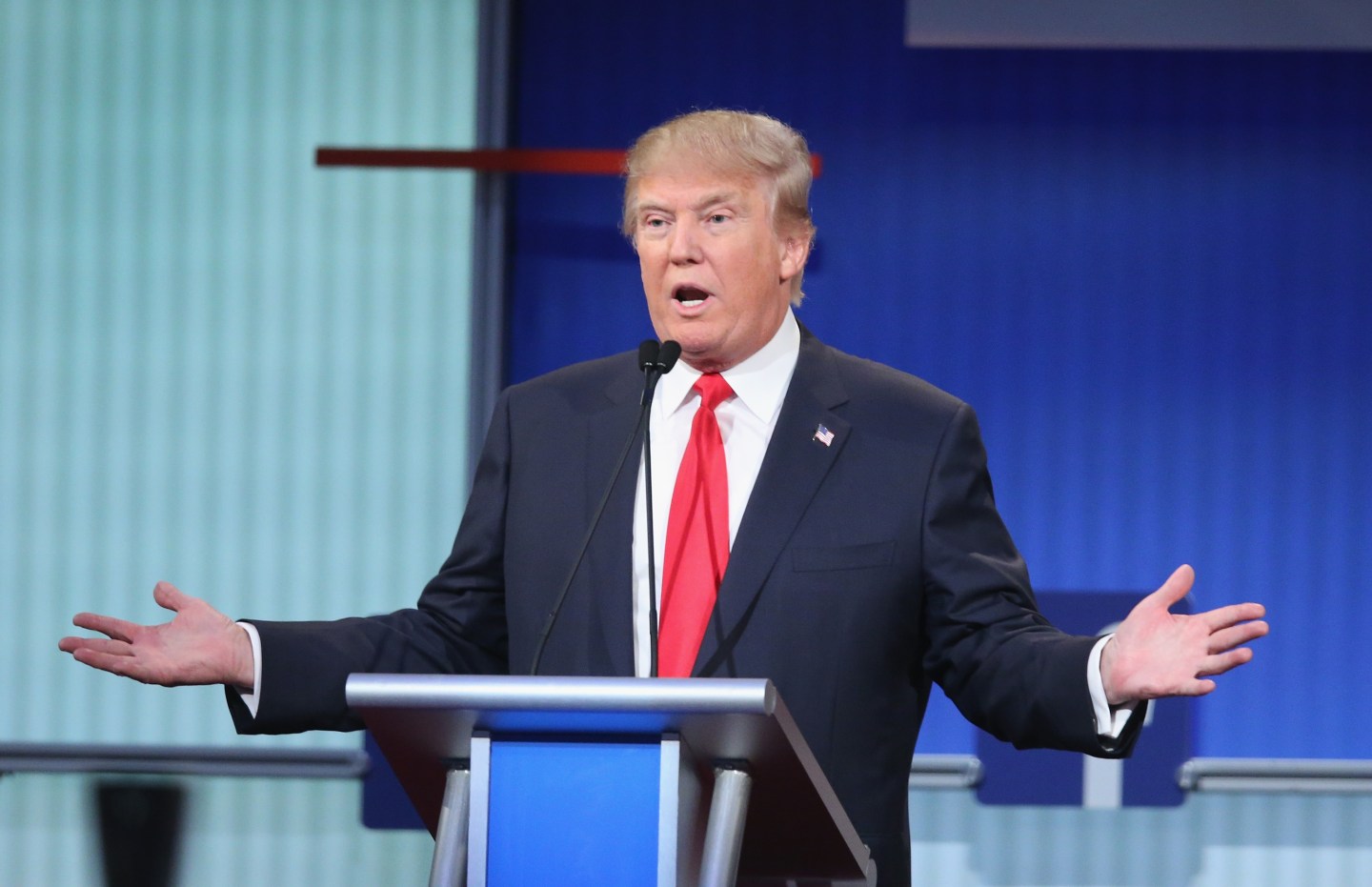 CLEVELAND, OH - AUGUST 06: Republican presidential candidate Donald Trump fields a question during the first Republican presidential debate hosted by Fox News and Facebook at the Quicken Loans Arena on August 6, 2015 in Cleveland, Ohio. The top ten GOP candidates were selected to participate in the debate based on their rank in an average of the five most recent political polls. (Photo by Scott Olson/Getty Images)
Photo by Scott Olson—Getty Images

Goldman Sachs may have cried wolf one too many times on Donald Trump’s bull market.

Even as the Dow Jones Industrial Average rallied for the seventh straight session Tuesday, hitting 18,923—a new all-time high—by the market’s close and some banks have taken on a more optimistic tone about the president-elect’s potential effect on the economy, Goldman (GS) is ringing the warning bell post-election once again.

This time they have pulled out the economic s-word—Stagflation.

In a note on Monday, Goldman economists Sven Jari Stehn and Alec Phillips argued that Trump’s economic policies could bring about both higher inflation, more unemployment, and a slower economy—largely due to the president-elect’s promise to pair more spending with protectionism, both of which have the potential to significantly increase prices, Bloomberg reported.

It’s not the first time Goldman has predicted Trump doom, incorrectly. Shortly before the election, Goldman predicted that a Trump win would cause the stock market to crater. When that didn’t happen, Goldman doubled down, this time saying that Trump likely would have very little impact on the stock market. Wrong again, stocks have hit new high, after new high since the election.

Still, even if Goldman has been skeptical of Trump, the bank’s investors have been bullish on what the new president will mean for the bank.

Shares of Goldman having surged 16% since election night. The bankings sector as a whole has been given a boost, as investors expect Trump’s rhetoric about pulling back the Dodd-Frank Act to materialize as looser regulation for the financial sector. Meanwhile, financial companies could see a bump in their bottom line as Trump’s plan to increase fiscal spending could push bond yields and borrowing rates higher.

Another bonus: Goldman, more so than its rivals, has dragged its feet in complying with Dodd-Frank’s Volcker rule, particularly when it comes to banning banks from holding private equity stakes. It’s held onto its PE business, and it’s lucrative fees, long after nearly all of its rivals have ditched it because of the new regulations, pledging it would follow suit by July 2017. Now it may not have to.

And Goldman and Trump have a bit of a history. The bank fired its only known employee to have donated to the Trump-Pence ticket earlier this year—though their likely were others—though the bank said the termination was due to the employee’s decision to start a business without the bank’s permission. And Goldman banned top employees from donating to the Trump campaign because of so-called pay to play rules. Donations to the Clinton-Kaine ticket were allowed.

For Trump’s part, the businessman has accused Goldman of colluding with Hillary Clinton to ruin the U.S. and enrich the elite. The Trump campaign’s closing ad, aimed at Clinton and Wall Street, even featured a clip of CEO Lloyd Blankfein, although a number of people in Trump’s inner circle formerly worked at Goldman.

Blankfein himself refused to endorse a candidate, saying his opinion could unduly influence the outcome of the election. Nonetheless, following the election Blankfein sent out a note to Goldman employees saying he was optimistic, noting that the president-elect’s proposed infrastructure spending could boost the economy. Still, Blankfein said he really didn’t know what a Trump presidency would bring. “We can aspire to predict the future, but that is beyond our reach,” wrote Blankfein. Clearly.