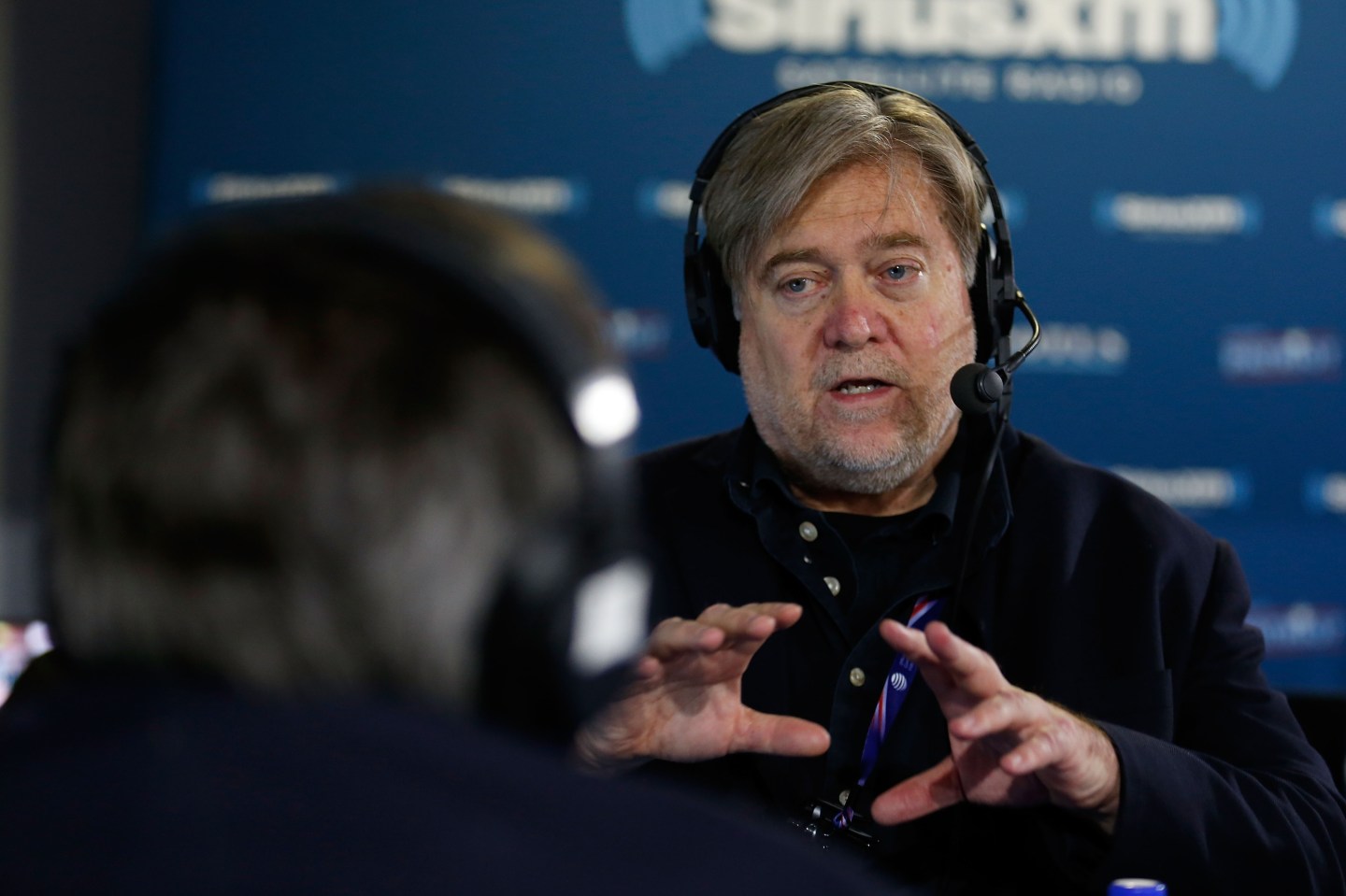 CLEVELAND, OH - JULY 20: Michael Patrick Leahy talks with Stephen K. Bannon about a story he has been working on about high infection rates of tuberculosis rates within in refugee communities while appearing Brietbart News Daily on SiriusXM Patriot at Quicken Loans Arena on July 20, 2016 in Cleveland, Ohio. (Photo by Kirk Irwin/Getty Images for SiriusXM)
Photograph by Kirk Irwin — Getty Images for SiriusXM

First it was Steve Mnuchin, who in May joined Trump’s campaign as national finance chairman. He also is Trump’s likely pick for Treasury Secretary, and is part of the GOP presidential candidate’s recently-announced economic advisory team.

Now it’s Steve Bannon, who overnight was named CEO of the Trump campaign.

Bannon made his bones as a mergers and acquisitions banker with Goldman Sachs (GS) beginning in the 1980’s, at the peak of Wall Street’s hostile takeover and junk bond booms. Most of his work was defending companies from such boardroom assaults ― in keeping with Goldman’s general stance on such things ― but he did later work on supporting some leveraged buyouts before moving into media and entertainment banking.

In 1990, Bannon and some Goldman colleagues left to launch a media-focused boutique investment bank called Bannon & Co. That lasted for eight years — including a fortuitous deal for a small equity stake in Seinfeld — before Bannon & Co. was purchased by French bank Société Générale.

Bannon remained around Hollywood for several years, financing and producing films. Eventually he would turn his media talent toward politics and, in particular, right-wing populism. In 2012 he became executive chairman of Breitbart News (following the death of site founder Andrew Breitbart), which this campaign season has become an unabashed mouthpiece for the Trump campaign.

After Fortune reported last month that Trump favors Steve Mnuchin for Treasury, several notable conservative commentators were aghast. And a bit confused, given Trump’s occasional criticisms of Wall Street, a Republican Party platform that includes breaking up the big banks and his rivals’ ties to Goldman Sachs (both Ted Cruz via wife Heidi, and Hillary Clinton via paid speeches).

Bannon is much further removed from his Goldman days than is Mnuchin, and isn’t being floated for Treasury, but it’s still another case in which the anti-establishment billionaire has partnered with someone who got rich in the corridors of power.