This Tech Giant Has Kicked Off Drone Delivery in Rural China 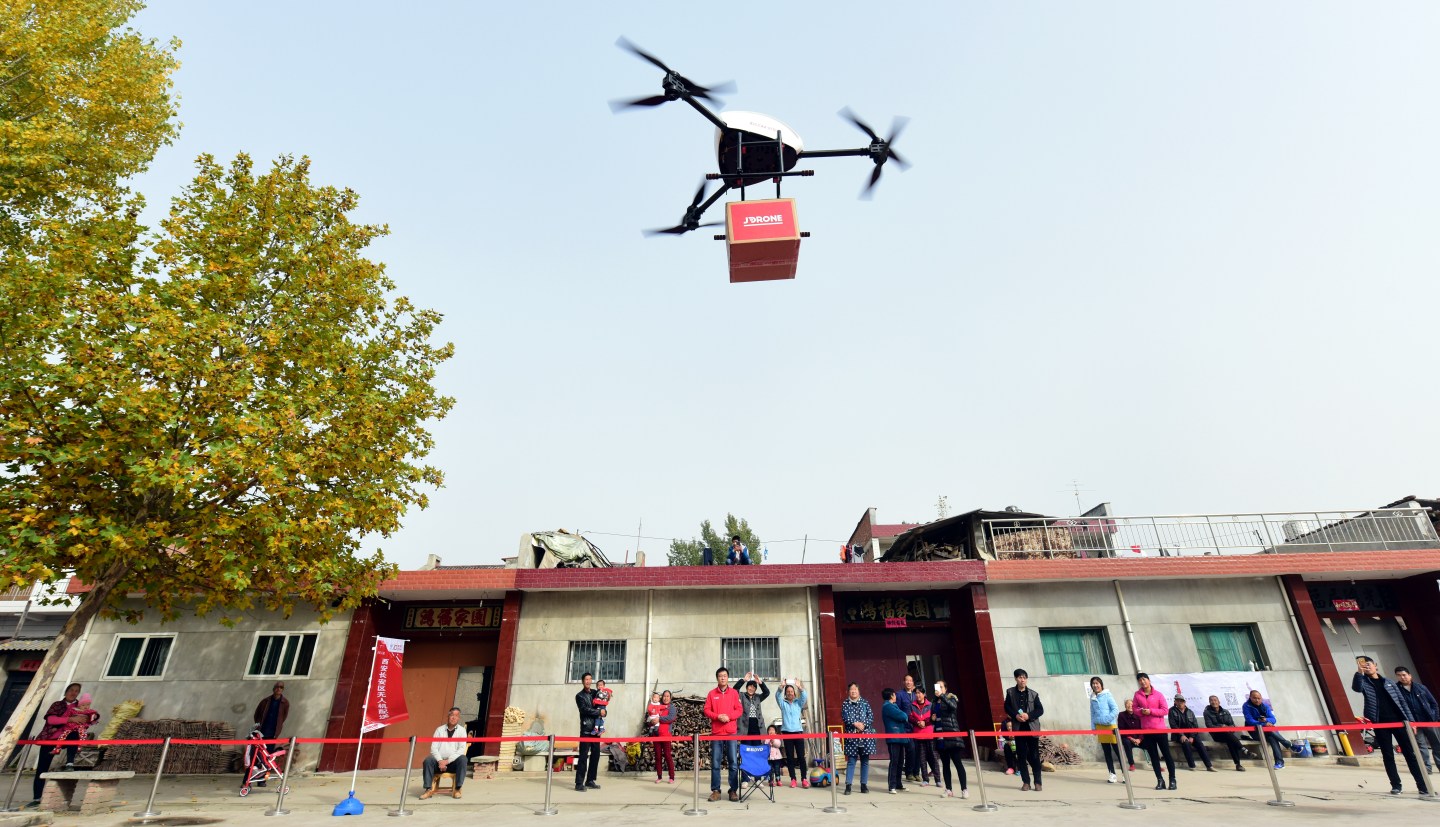 JD.com has started a trial of the program in rural China, testing drop-offs outside of Beijing and in Jiangsu, Shaanxi, and Sichuan provinces, during the country’s “Singles’ Day” shopping festival this past Friday.

“There have been thousands of trial flights, with a portion of those delivering packages to customers,” Josh Gartner, spokesperson for JD (JD), told Fortune. Gartner did not say how many customers have participated in the program to date.

“Everything went very smoothly with packages being delivered from four different bases across the country.”

JD may be on its way to becoming the first e-commerce giant to roll out a commercial drone delivery program at a large scale.

Amazon (AMZN) CEO Jeff Bezos made similar such announcements in 2013. However, due to FAA regulations, the Prime Air delivery service hit a roadblock earlier this year, when the Obama administration announced new FAA regulations that require commercial drones to stay within sight of pilots, carry a payload of less than 24 kilograms (55 pounds), and require drone operators to pass a test every two years.

The FAA regulations also inhibit commercial drones from flying over anybody that is not involved in the transaction, “pretty much nixing most package drop-offs,” as Fortune’s Jeremy Quittner reported.

Gartner told The South China Morning Post that the Chinese firm had successfully obtained government clearance for the initiative, which employs a fleet of 30 drones that can deliver packages weighing from 5 to 15 kilograms for a distance of up to 50 kilometers. “I don’t think anyone else is doing this,” he said.

“China has the edge on the U.S. right now in terms of enabling fledgling drone delivery programs,” says Arthur Holland Michel, co-founder of the Center for the Study of the Drone. “But it is important to remember that both countries are still operating under evolving interim rules for drones.”

For a wide-scale drone delivery program to be implemented, Michel says, “it’ll be necessary to have some form of air traffic management system for drones, and more advanced regulations, not to mention better, more autonomous technology that is certified by the aviation authorities.”

“What remains to be seen is whether China’s edge in drone delivery in the short term will have long-term consequences for adoption of drone delivery programs in both countries.”

“By the end of next year we’ll hopefully have over 100 routes available and in operation,” JD.com’s chief technology officer, Chen Zhang, told Bloomberg last Thursday.

Despite stringent regulations, 7-Eleven made an FAA-approved test run of their delivery service this past July in Reno, Nev.—marking the first time a U.S.-based customer received a delivery at home via drone.

JD’s commercial drone delivery venture began as a service designed to speed up delivery to locations in rural China. To skirt the problem of landing onto individual houses, drones are reportedly dispatched from regional delivery stations to a legion of 300,000 “village promoters” who are then tasked with delivering products directly to consumers.