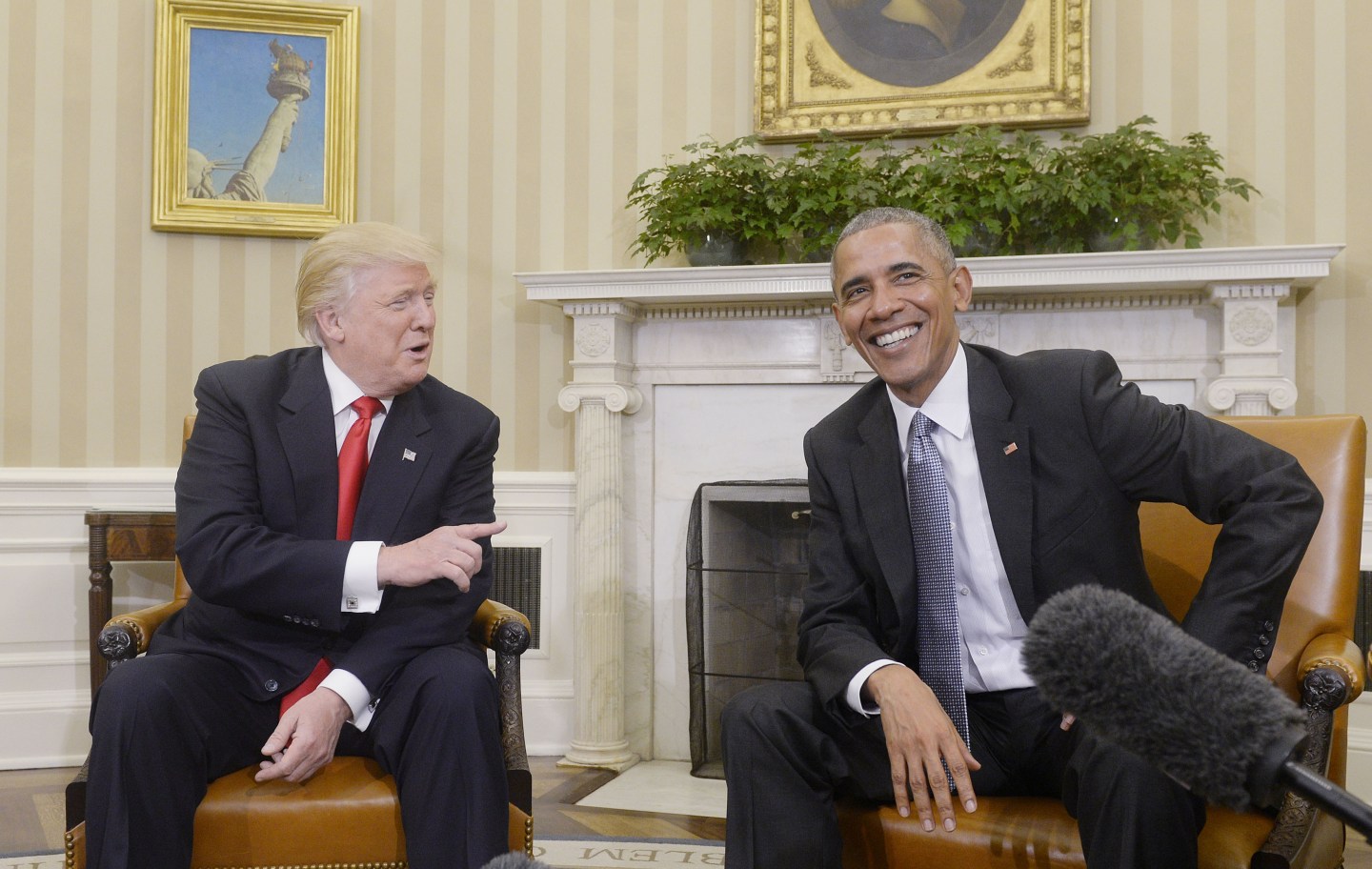 U.S. President Barack Obama meets with President-elect Donald Trump in the Oval Office of the White House on Thursday in their first public step toward a transition of power November 10, 2016 in Washington, DC. Photo by Olivier Douliery/ABACA
Olivier Douliery—ABACA/AP

President-elect Donald Trump just announced his first big possible compromise. And it’s on, of all things, the Affordable Care Act (ACA), aka Obamacare.

Trump made President Obama’s health reform law one of his scariest political boogeymen during the 2016 campaign. He called it a “disaster” that’s crushing consumers with spiraling costs and fleeing insurers (the reality is considerably more complicated despite very legitimate problems with the ACA). And Congressional Republicans, who have voted to repeal Obamacare upwards of 60 times during the now-lame duck president’s tenure, have pledged to fully do away with it the moment they can under Trump’s administration.

But Trump told the Wall Street Journal in an interview Friday that his meeting with President Obama on Thursday, which had an air of cordiality, had convinced him to consider preserving critical Obamacare provisions like guaranteeing coverage for Americans with pre-existing conditions and allowing young people up to the age of 26 to remain on their parents’ health policies.

“I like those very much,” Trump told the Journal. Obama asked the president-elect to keep those measures intact during their meeting. “I told him I will look at his suggestions, and out of respect, I will do that,” said Trump, adding, “either Obamacare will be amended, or repealed and replaced.”

It may not be entirely surprising that Trump is, at least partially, changing his tune on a policy he’s consistently said he despises. The reality of repealing a law that provides coverage to more than 20 million Americans, no matter its flaws, is no mean feat—as evidenced by the fact that Trump’s surprise victory on Tuesday night may have helped fuel a massive and unexpected Obamacare enrollment surge on Wednesday, when more than 100,000 people signed up for individual insurance coverage through Healthcare.gov.

But there are still plenty of questions about how preserving these measures, especially guaranteed issue for people with pre-existing conditions, could possibly work alongside Trump’s and the GOP Congress’ other proposed reform to U.S. healthcare. Trump’s transition website posted some more details about what his health policies might look like on Thursday, including providing the option of “continuous coverage” for people who have already purchased individual plans and creating “high-risk” insurance pools for those with pre-existing conditions who haven’t.

It’s unclear how these various proposals could work in tandem with, at the very least, Trump’s ostensible willingness to keep guaranteed issue in place. That provision could lead to a massive adverse selection problem without Obamacare’s so-called individual mandate, which Trump and the GOP alike despise, requiring all Americans who make enough money to procure insurance so that consumers can’t just buy plans when they get sick.