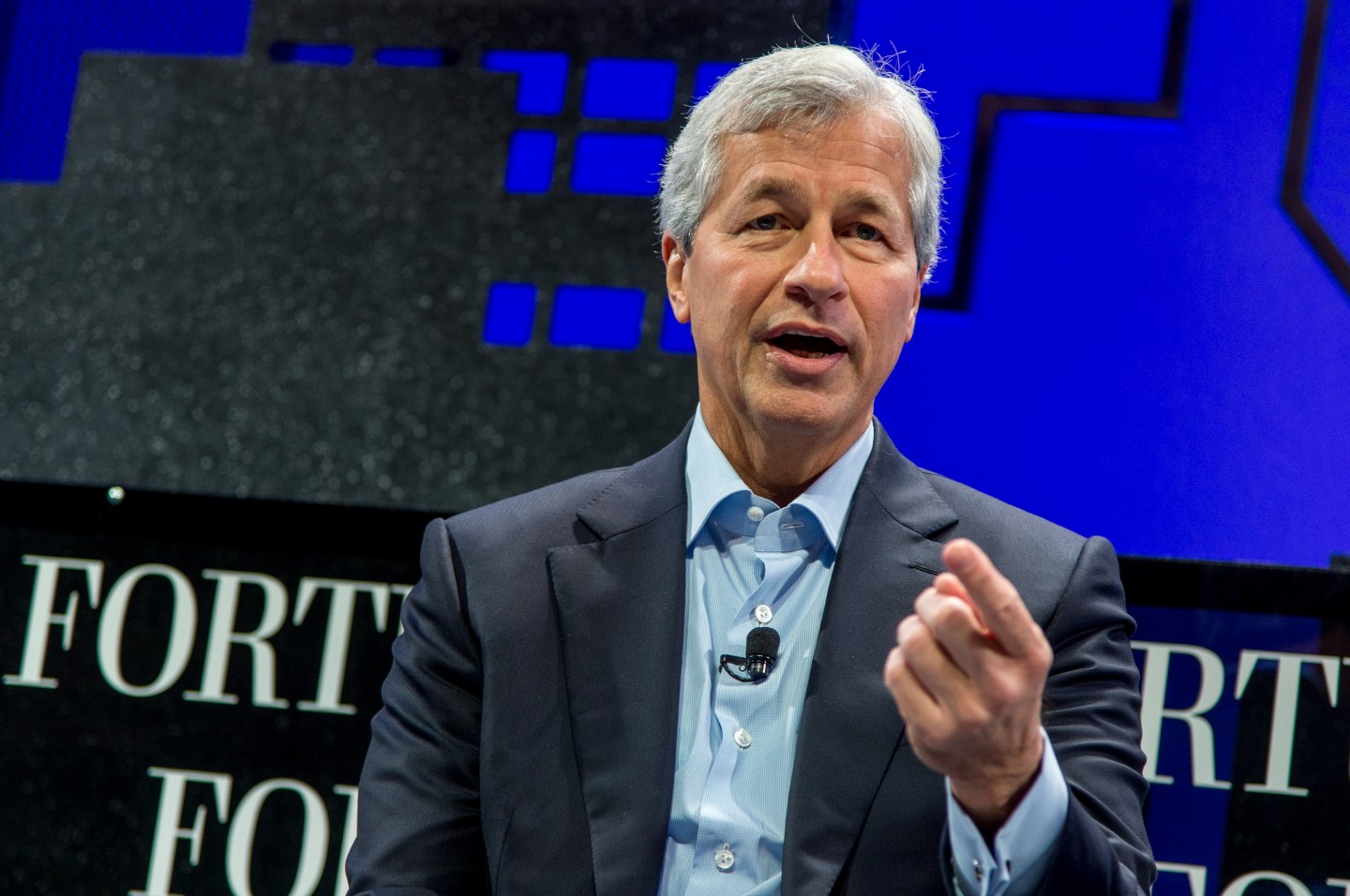 FORTUNE GLOBAL FORUM Wednesday, November 4th, 2015 2015 FORTUNE GLOBAL FORUM San Francisco, CA, USA 11:25 am-12:00 noon THE DECADE AHEAD Since ascending to the CEO job at JPMorgan Chase & Co. ten years ago, Jamie Dimon has powered through the financial crisis and grown the company’s stock by more than 60%at a time when the S&P Financials index declined by more than 20%. In this closing session, he’ll discuss lessons learned along the way and how banking has changed since the financial crisis Speaker: Jamie Dimon, Chairman and CEO, JPMorgan Chase & Co. Interviewer: Alan Murray, Fortune Photograph by Stuart Isett/Fortune Global Forum
Photograph by Stuart Isett—Fortune Global Foru

A member of Trump’s transition team contacted Dimon recently to see if he would be interested in the role, two people familiar with the matter told Reuters on Thursday.

It was not clear whether Dimon had responded, though he has said emphatically multiple times that he was not interested in the role. JPMorgan (JPM) spokesman Andrew Gray declined to comment, and Dimon, who is traveling outside the United States, could not be reached.

A person familiar with Trump’s personnel efforts said the transition team’s list included Dimon, Mnuchin and Rep. Jeb Hensarling. The person said that Mnuchin was a more likely choice given his proximity to Trump.

Trump’s controversial rhetoric and behavior during the campaign concerning immigrants, women, minorities, the disabled, Muslims and China, among other things, were offensive to many senior Wall Street executives who have tried to embrace inclusion, diversity and globalization.

Trump also criticized Wall Street on the trail, saying the industry “got away with murder” and would not be let off the hook.

Since being elected on Tuesday, Trump has softened his tone and tried to bridge gaps by meeting with President Obama and taking calls from foreign officials. Bringing Dimon on board could help him mend fences with the financial industry, which appears to be coming around to the idea of Trump in the White House.

At an event on Thursday, Goldman Sachs Group CEO Lloyd Blankfein said Trump could be good for the economy and Dimon would be an excellent choice for Treasury Secretary, while hedge fund manager Bill Ackman said Trump’s advisers would get “the best and brightest” to run the economy.

Hensarling’s office indicated in a statement that he did not want the job.

“Serving in his Cabinet is not something I’ve indicated an interest in and it’s not something I am pursuing,” the statement said. He said he looked forward to working in Congress to repeal the Dodd-Frank Act which tightened regulations on Wall Street in the wake of the financial crisis.

Dimon, a lifelong Democrat, has been floated as a possible candidate for roles like Treasury Secretary in the past. However, resentment toward bankers following the 2007-2009 financial crisis made his candidacy much less likely, as did JPMorgan-specific scandals related to a costly derivatives trade and bad mortgages.

A $13 billion mortgage settlement JPMorgan reached with the federal government in 2013 prompted Trump then to call Dimon “the worst banker in the United States.”

However, Dimon has managed to retain a reputation within the banking industry as a distinguished leader, in part by the way he handled those scandals and the way he talks about JPMorgan’s role in society as the largest U.S. bank.

For instance, Dimon decided to have JPMorgan make big investments in Detroit, calling it a civic duty to turn around an economically challenged city. His memos, speeches and letters to shareholders are often sprinkled with patriotic language.

“America is best when we come together with clear leadership, expertise and the political will to take on difficult challenges and get things done,” the 60-year-old chairman and CEO said in a memo to JPMorgan Chase employees following Tuesday’s election. “No one should ever doubt the strength and resilience of our country and our democracy.”

However, Dimon has said as recently as September that he would not want a role as Treasury Secretary. If he holds to that, it could put him and JPMorgan in an awkward position.

Saying “no” to a presidential request to join the cabinet is unusual, and the bank would then be overseen by appointees from an administration Dimon rejected.

Even so, his associates do not expect Dimon to say “yes.”

Dimon has said his determination to act would make it hard to make political compromises. Talking before an audience in September, he said the only job in government he would want is the one Trump is about to get.

“I would love to be president of the United States of America,” Dimon told the Economic Club of Washington. “Until Donald Trump got to where he was, they said you’ll never see a rich businessman who’s never been in politics be president. I clearly was wrong about that.”