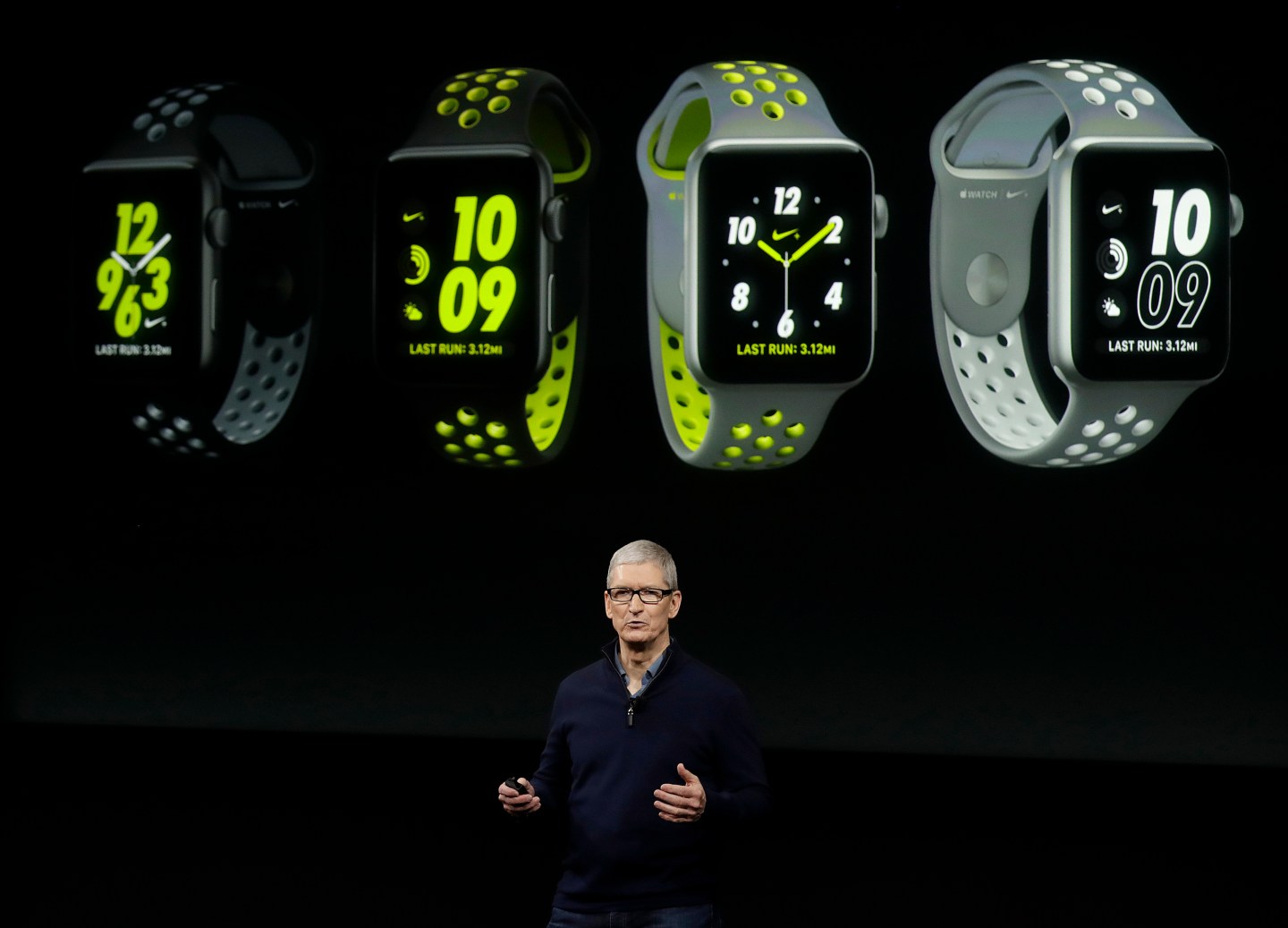 In a major step forward in the department store chain’s efforts to build up its activewear and wellness business, Kohl’s will start selling the Apple Watch at 400 of its 1,100 stores on November 15, hoping to drum up shopper traffic and attract more well-heeled customers during the Christmas period and beyond.

The announcement comes just a few weeks after Macy’s (M) said it would sell the watch within Apple boutiques at 180 of its stores. But in one key difference, Kohl’s will place the watches in its activewear and wellness sections, rather than with other electronics. At the Macy’s flagship in Manhattan, the Apple boutique is located near the watch area but also sells other tech devices such as iPhones and laptops.

“We’re not launching it as an electronics partner,” Michelle Gass, Kohl’s chief merchandising and customer officer, told Fortune in an exclusive interview at the retailer’s design center in New York City. “We were positioning this as an active and wellness device.” For Apple, the Kohl’s partnership is a way to add hundreds more distribution points beyond the city centers that typically house Apple stores, and reach a more modest-income shopper and a wider-ranging clientele.

The Apple Watches will be shown on four-foot-tall display fixtures that feature four different watch models, and the areas will be staffed by Kohl’s workers. Kohl’s will stock 10 different kinds of Apple Watches.

Kohl’s comparable sales are down 2.8% so far this year. The retailer is eager for a repeat of its strong Thanksgiving-through-Christmas period from 2015, when “comps” rose 4%.

Kohl’s Apple coup comes just a few months after it announced a deal to sell Under Armour (UA) at all its stores starting in March. Seeking to distinguish itself from Macy’s and J.C. Penney (JCP), Kohl’s has planted its flag in wellness and activewear, an area where it faces growing competition from Target(TGT). Gass said the category is well on its way to generating 20% of company sales in the future. And Kohl’s has proven itself here: FitBit (FIT) is now a $100-million-a-year business for Kohl’s after only two years of partnership.

Beyond Apple, Kohl’s is betting on tech to help customers shop and to facilitate less glamorous but essential elements of holiday shopping, such as better coordination of stores and e-commerce. The retailer also recently launched its Kohl’s Pay mobile app, which is designed to integrate with the Kohl’s charge card and the Yes2You rewards program.

Though Kohl’s was behind rivals like Macy’s in equipping stores to prepare online orders for in-store pick-up, it is going all in this year, the second time it is offering this service during the holiday season. This is a process that must be seamless for the customer, who 25% of the time will buy something else when in the store for a pickup. Kohl’s is also using all its stores to ship e-commerce orders, something that speeds up delivery.

Kohl’s also plans to be clear about its competitive prices. That is all the more critical given how heavily J.C. Penney will be focusing on promotions. But Kohl’s will also be competing with a Walmart (WMT) that has cut prices on thousands of items for the holidays, and a Target that is focusing most of its marketing on pricing.

To that end, Kohl’s will redouble its marketing messaging to remind customers of the myriad ways to combine promotions to get low prices. Kohl’s Yes2You loyalty program has 30 million active members and is central to that strategy.

The retailer’s Kohl’s Cash is also a way to offer shoppers discounts that some vendors prohibit. For example, Nike (NEE) does not allow the use of coupons. Yet nothing stops a Kohl’s customer from using points from the loyalty program or Kohl’s cash to redeem for Nike items or the Apple Watch. That, Gass said, has been a way for Kohl’s to build up its presence with “premium” brands. For Black Friday, Kohl’s will up the ante in the cash program and offer $15 credit for $50 of spending rather than the usual $10 credit.

Kohl’s is also betting on its revamped private brands to bring in holiday season business. Sonoma, a billion-dollar Kohl’s apparel and home goods brand, was relaunched in the spring, and Gass said the women’s apparel component of the brand was performing particularly well. Other notable merchandise for the holidays will be new items in the Fitbit assortment, and a relaunched Beats section.

Though many expect a good holiday season for retailers, Kohl’s is being more cautious about how much merchandise it will order, lest it hurt its gross margin if too much goes unsold. Another piece of that is the desire to have less clutter in the store, and free up store workers to help shoppers on the floor.