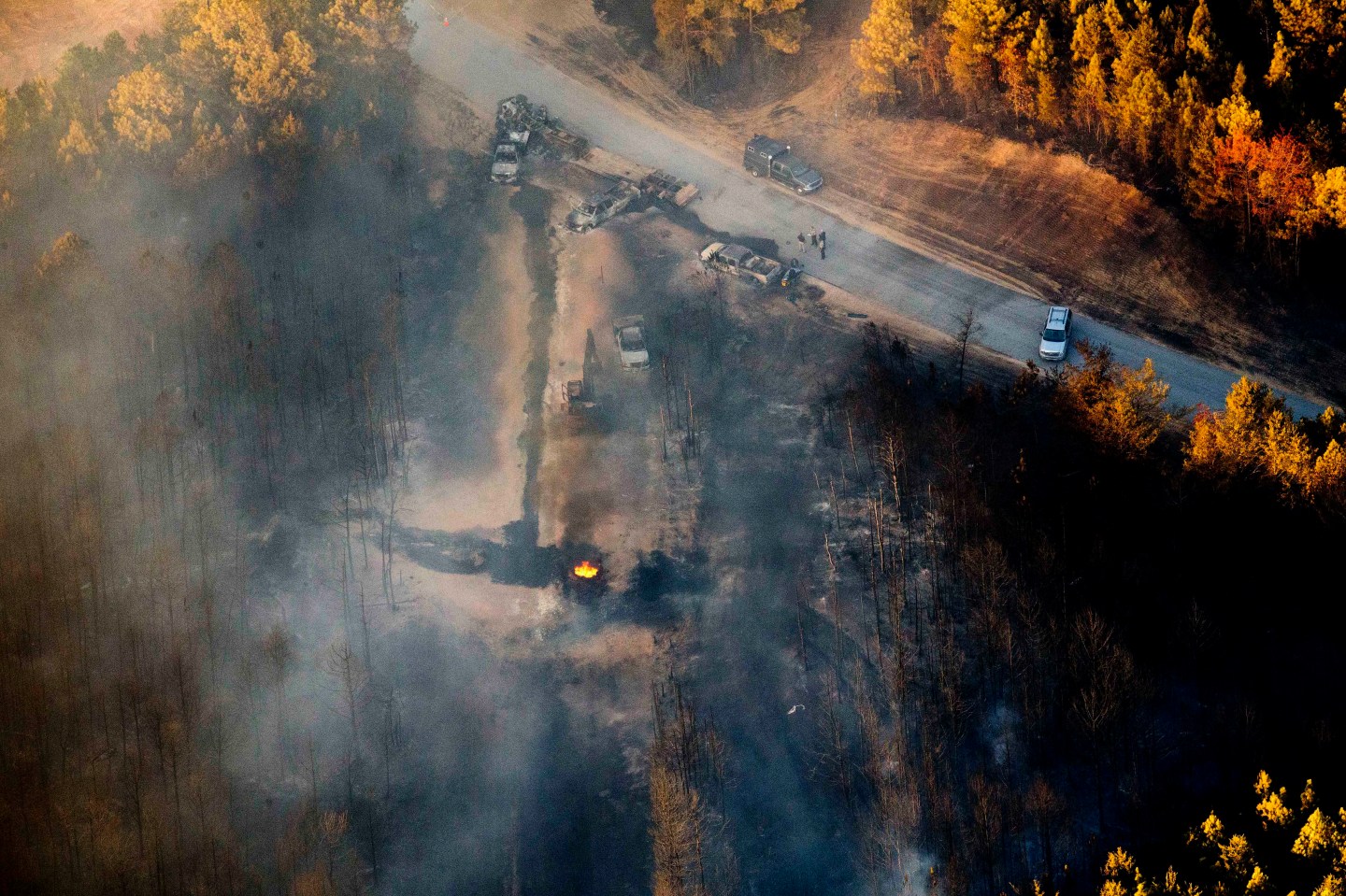 A flame continues to burn after a Monday explosion of a Colonial Pipeline, Tuesday, Nov. 1, 2016, in Helena, Ala. The blast, which sent flames and thick black smoke soaring over the forest, happened about a mile west of where the pipeline ruptured in September, Gov. Robert Bentley said in a statement. (AP Photo/Brynn Anderson)
Photograph by Brynn Anderson — AP

A major gasoline pipeline that is a crucial supply source for the U.S. East Coast could reopen as early as Saturday after an explosion in Alabama killed one worker and injured five others, Colonial Pipeline said on Tuesday.

The blast on Monday occurred several miles from its biggest gasoline spill in nearly two decades in September. That spill caused a 12-day interruption in the flow of about 1.3 million barrels per day of the fuel from the refining hub on the Gulf Coast to the Northeast.

The shutdown will restrict gasoline supplies to millions of Americans in the Southeast and possibly the Northeast. The Northeast could be less affected since it can get supplies via waterborne shippers.

In a news conference Tuesday, Colonial executive Gerald Beck said the crew was putting in a valve in order to finish repairs related to September’s leak.

He said the U.S. Occupational Safety and Health Administration currently has control of the site. The fire is still burning, and Colonial expects to be able to get into the site in the next day or two—and from there, determine how long a repair will take.

The 5,500-mile Colonial Pipeline is the largest U.S. refined products pipeline system and can carry more than 3 million barrels of gasoline, diesel and jet fuel between the U.S. Gulf Coast and the New York Harbor area.

The worker who was killed was found on-site, but his name was not released.

U.S. gasoline futures soared 15% to the highest since June on the shutdown, but pared gains sharply to 4.6% to settle at $1.4841 per gallon after Colonial said it could reopen the pipe by the weekend.

Colonial said it would explore potential options to operate parts of its gasoline pipe, called line 1, and would evaluate shipping gasoline on the distillates pipe, line 2, which was briefly shut overnight by the incident.

During the September outage, the company shipped some gasoline on the line that usually transports diesel and jet fuels.

“If they are properly motivated, they can do the investigation and get the line up a lot quicker than the last one,” said Richard Kuprewicz, president of Accufacts, a pipeline advisory firm, referring to the September outage.

“My experience tells me that even with a fatality, I would not expect this to go as long as the last one.”

Shippers using the East Coast supply artery were, however, bracing for a longer shutdown as Colonial said it was hard to predict a repair schedule.

Shippers and fuel companies were scrambling to secure supplies via sea or other alternatives to get fuel to the East Coast. Fuel retailers and consumers are likely to be most affected, though prices at the pump have not risen yet, even as gasoline futures have spiked.

The governors of Alabama, North Carolina and Georgia on Tuesday issued regulatory waivers to allow easier transit of fuel.

North Carolina Governor Pat McCrory said at a news conference the state gets 70% of its gasoline from the Colonial Pipeline.

One person was killed and five others hospitalized in the incident that occurred when a nine-man crew working on the line in Shelby County hit Line 1 with a large excavator known as a track hoe, Colonial said.

A representative for the U.S. Pipeline and Hazardous Materials Safety Administration (PHMSA) said investigators were on the scene.

Brigham McCown, who headed up PHMSA for two years under former President George W. Bush, said the fatality could complicate restart efforts in upcoming days as multiple state and federal agencies investigate the incident. However, he said the details of how the rupture occurred may help speed the timeline.

“It’s important to get out there, get on site, figure out who had what equipment where and who was giving what orders,” said McCown.

The explosion took place in an unincorporated wildlife area outside Helena, Alabama. Colonial and the state’s forestry commission were leading the response.

Ryan Chandler, vice president at Colonial Group, which is not connected to Colonial Pipeline, said he has been fielding calls from the pipeline’s customers seeking access to its Charleston and Savannah marine terminals.

Chandler’s company manages three marine terminals in the U.S. Southeast and ships on the Colonial pipeline. He said during the September outage, business at the Savannah terminal jumped sevenfold, while Charleston jumped fivefold.

For inland markets in the U.S. Southeast, which do not have access to ports, alternative supplies can be harder to get.

The September spill led to long lines at the pump and a shortage of fuel in Georgia, Tennessee and Alabama.