This Is What Congress Will Look Like After the Election 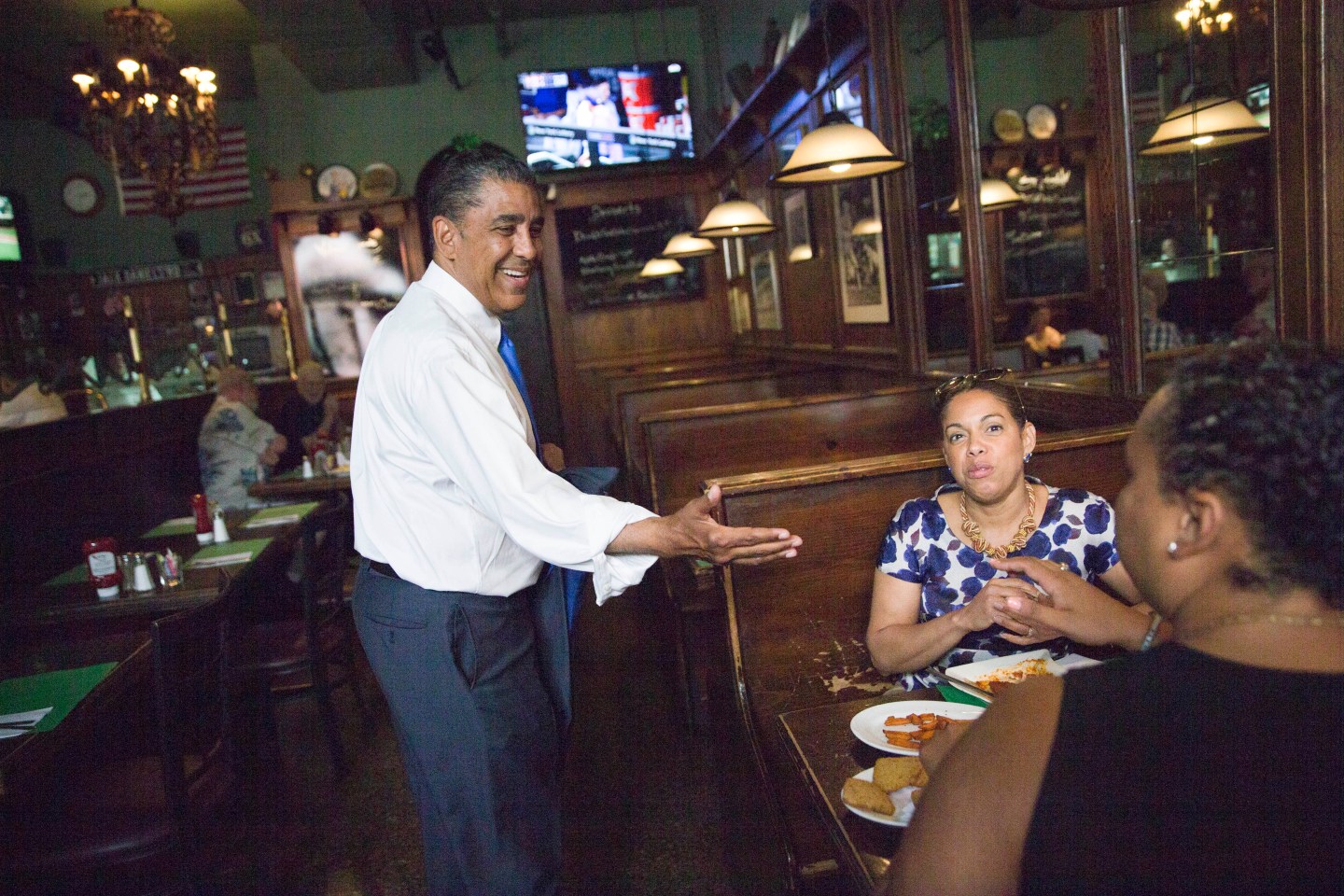 FILE - In this July 6, 2016 file photo, New York Democratic Congressional candidate, New York State Sen. Adriano Espaillat, left, greets diners at a restaurant in the Inwood neighborhood of Manhattan. When the final votes are tallied, count on some trailblazers heading to Congress. New York Espaillat is a near shoo-in in Rep. Charlie Rangel's old district and would be the first person born in the Dominican Republic to get elected to Congress. (AP Photo/Mary Altaffer, File)
Mary Altaffer AP

No matter who wins the presidency, women and minorities are poised to make gains in the next Congress. The offspring of two pillars of the Washington establishment—former Vice President Dick Cheney and ex-CIA Director Leon Panetta—have a good chance to resume their families’ service in Congress.

A record 167 women are running for the House. While outcomes are uncertain, analysts predict the number of women in the House for the 115th Congress that convenes Jan. 3 will exceed the current 84.

Racial minorities are expected to make historic gains, although Congress is likely to remain overwhelmingly white, male and middle-aged.

The new Congress could have some familiar names, with several former members seeking their old seats.

A look at how the demographics of Congress may change following the Nov. 8 elections.

Twenty women now serve in the Senate, a total likely to rise next year.

Kelly Dittmar, an assistant professor at Rutgers University and a scholar at the Center for American Women and Politics, said female candidates may benefit from running with Hillary Clinton at the top of the ticket—and from sexist comments made by Donald Trump. But she said the major boost is from Clinton’s standing. Twelve of the 16 women running for Senate this year are Democrats.

“Democratic candidates will be helped by a strong Democrat on top of the ticket,” Dittmar said. She cited Deborah Ross in North Carolina, Katie McGinty in Pennsylvania and Rep. Tammy Duckworth in Illinois as likely beneficiaries of possible Clinton coattails.

Not all the news for women is positive, said Dittmar, who has written research briefs outlining the prospect for female candidates in the House and Senate. Based on current polls, Maryland’s 10-member congressional delegation is likely to revert to all-male, which Dittmar called especially notable because Sen. Barbara Mikulski, D-Md., holds the record as the longest-serving woman in Congress. Rep. Donna Edwards is retiring after losing a bid for the Senate.

Maryland could join more than a dozen states with all-male delegations in Congress. If elected, McGinty would be the state’s first woman to serve in the Senate and could find herself the lone woman in Pennsylvania’s 20-member congressional delegation.

“Pennsylvania has a lot of work to do” to elect more women, Dittmar said, including better recruitment of female candidates at all levels. “They are still contending with a bit of a boys’ club in Pennsylvania.”

What to Watch in the Fight for Control of the Senate

Former Illinois Sen. Carol Moseley Braun, the first African-American woman elected to the Senate, said she was thrilled to see “people running for office who don’t fit the traditional role of wealthy, white and male.”

Braun and Sen. Mazie Hirono, D-Hawaii, are only the minority women who have served in the Senate.

Democrat Catherine Cortez Masto, who is running for an open seat in Nevada, joins Sanchez in seeking to become the nation’s first Latina senator, while Duckworth could become the Senate’s second Asian-American woman. Harris, the daughter of immigrants from India and Jamaica, could become just the second black woman elected to the Senate and the first with South Asian roots.

In the House, Democrat Pramila Jayapal of Washington state has a shot at becoming the first Indian-American woman to serve in Congress, while former Delaware Labor Secretary Lisa Blunt Rochester is likely to become the first woman and first African-American to represent her state in Congress. In New York, Democratic state Sen. Adriano Espaillat could become the first native of the Dominican Republic to join Congress.

READY FOR A COMEBACK

Former Sens. Russ Feingold of Wisconsin and Evan Bayh of Indiana, both Democrats, are trying to win back their old seats, while a few ex-House members are also running for their former jobs: Democrats Colleen Hanabusa of Hawaii, Carol Shea-Porter of New Hampshire, Brad Schneider of Illinois, Joe Garcia of Florida and Pete Gallego of Texas.

Republican Liz Cheney of Wyoming is widely expected to win her father’s old House seat, while Democrat Jimmy Panetta is running for an open seat in California representing the same region once served by his father, who had a long career in Washington as congressman, budget director, White House chief of staff, CIA director and defense secretary.

Republican Sen. Lisa Murkowski of Alaska is expected to easily win re-election to a Senate seat once held by her father, Frank Murkowski.