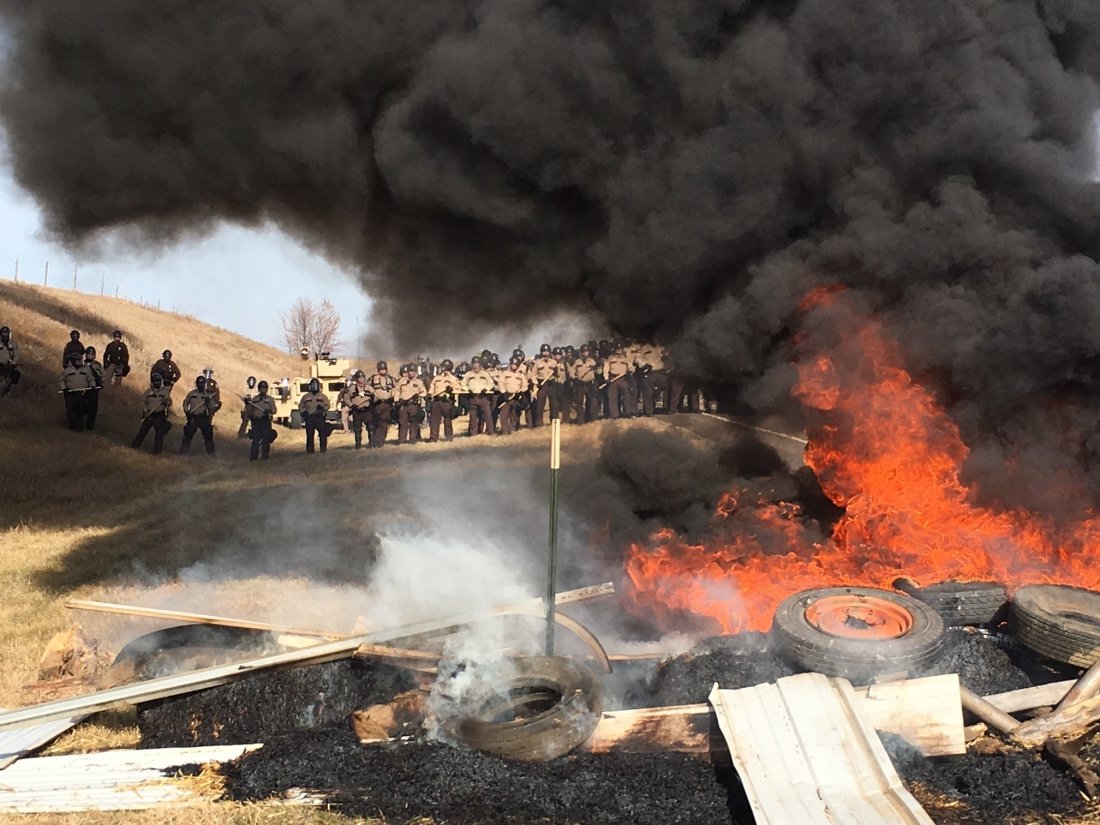 FILE--In this Oct. 27, 2016, file photo, tires burn as armed soldiers and law enforcement officers stand in formation to force Dakota Access pipeline protesters off private land in Morton County, N.D., where they had camped to block construction. On the same day seven defendants celebrated acquittal in Portland, Ore., for their armed takeover of a federal wildlife refuge in Oregon, nearly 150 protesters camped out in North Dakota to protest an oil pipeline were arrested. (Mike McCleary/The Bismarck Tribune via AP, file)
Mike McCleary AP

Protesters trying to block the Dakota Access oil pipeline were staying near their encampment Saturday morning following two days of confrontations that resulted in more than a hundred arrests and a barricade of burned-out vehicles blocking a North Dakota highway.

A handful of people walked along the highway amid cloudy, chilly weather early Saturday as campfires burned at the nearby camp where hundreds of protesters are staying. About a half-dozen law enforcement vehicles were parked along the roadway.

As many as 50 protesters gathered Friday behind heavy plywood sheets and the burned vehicles, facing a line of concrete barriers, military vehicles and police in riot gear. A small group of people, some observers from Amnesty International, stayed into the evening after protest leaders asked people to return to camp.

Standing Rock has waged a protest for months against the nearly 1,200-mile pipeline being developed across four states by Texas-based Energy Transfer Partners. The pipeline is slated to carry North Dakota crude oil to a shipping point in Patoka, Illinois.

The tribe argues that the pipeline is a threat to water and cultural sites. Protest encampments have grown to thousands of people, as the protest has drawn support from Native Americans and other people from around the country, including environmentalists and some celebrities.

The protest escalated on Sunday when demonstrators set up camp on private land along the pipeline’s path that had recently been acquired by Energy Transfer Partners. On Thursday, more than 140 people were arrested as law enforcement, bolstered by reinforcements from several states, moved in slowly to envelop the protesters.

Kirchmeier said tribal representatives were later allowed onto the private property to remove teepees. Officers arrested one person, but no details were released.

“It reminds me of something like a foreign country, what’s happened here with all the destruction,” she said.

The camp cleared on Thursday was located just to the north of a more permanent, larger encampment on federally owned land that has been the main staging area for hundreds of protesters. Many returned to that site Friday to regroup and reunite with others who had been arrested the day before.

There were no immediate plans to try to reoccupy the private land or to build a new camp elsewhere in the pipeline’s path, protest camp spokesman Cody Hall said.

“That’s something in the air for people to grasp onto, think about, but I don’t know if that will happen today,” he said Thursday.

A federal judge in September denied the tribe’s request to block construction on the grounds that the Army Corps of Engineers improperly issued permits, and North Dakota officials say no culturally significant sites have been found in the area. But on the day the judge ruled, three federal agencies stepped in to order construction to halt on Army Corps-owned land around Lake Oahe, a wide spot of the Missouri River, while the Corps reviewed its decision-making.

Meanwhile, construction has been allowed to continue on private land owned by the developer, with a goal of completion by the end of the year.