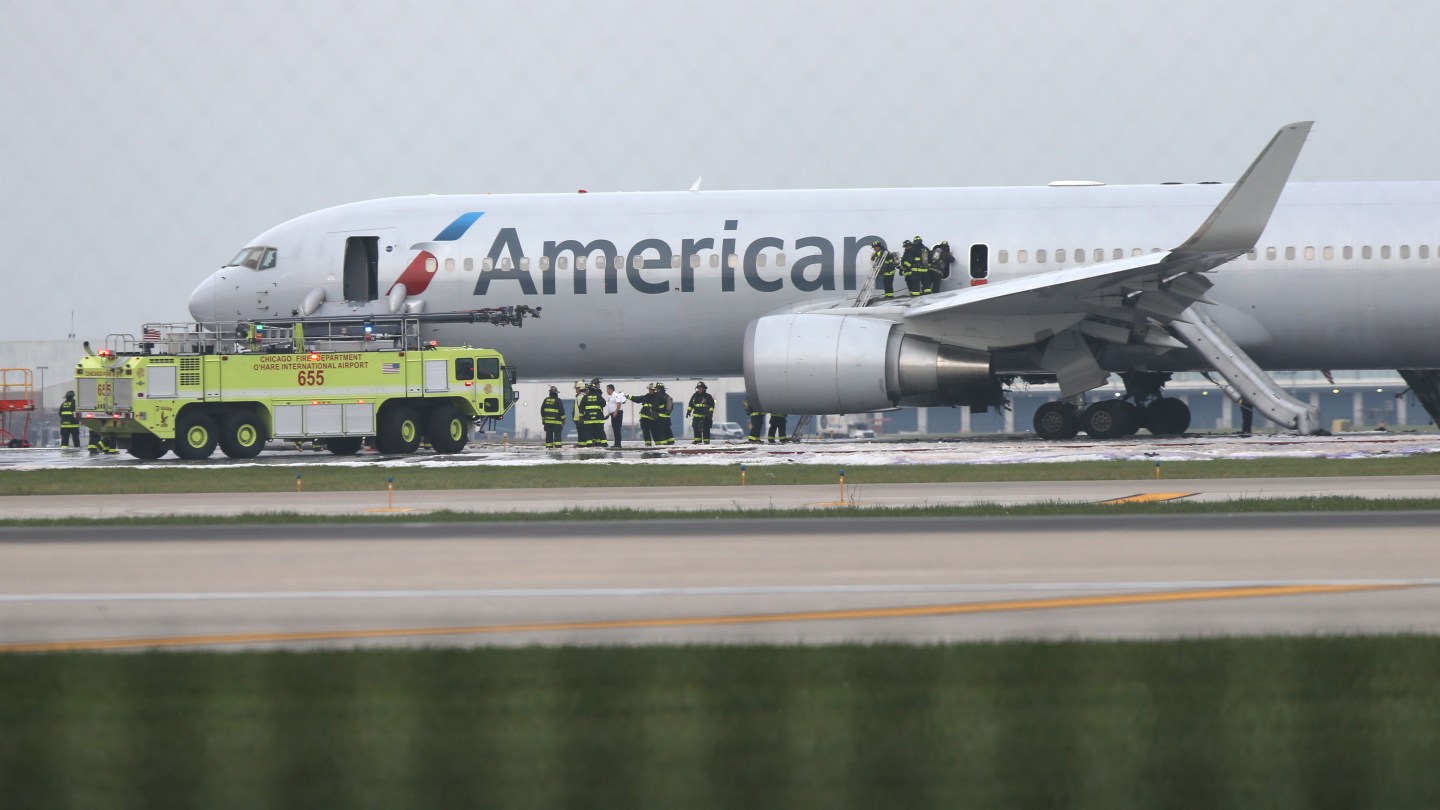 Investigators were scouring Chicago’s O’Hare International Airport on Saturday after an engine caught fire on an American Airlines plane attempting to take off on Friday, as a source said a detached engine part had hit a nearby building, something the design should have prevented.

No serious injuries were reported in the incident, which crippled a Boeing 767 with 161 passengers and nine crew members aboard as it was departing for Miami and briefly closed all O’Hare’s runways.

The failure was so intense that a disk from the engine hit a building roof, according to a person familiar with the matter.

Jet engines are designed to keep parts within the outer cover as escaped shrapnel can tear through the cabin or rupture fuel tanks in the wings. Such “uncontained” failures therefore are extremely rare and National Transportation Safety Board officials were looking for clues as to whether the fault lay with the engine, with maintenance or a freak event such as debris on the runway entering the engine.

The General Electric engine that powered the plane was a workhorse model known as the CF6 introduced decades ago, GE spokesman Rick Kennedy told Reuters on Saturday. The American Airlines plane engine dates from the 1980s or 1990s, and had been serviced by the airline, he said.

For more on airlines, watch:

American on Saturday declined to provide details about the aircraft, engine or maintenance, referring questions to the NTSB. The NTSB said it planned to release more details at a news conference later on Saturday at O’Hare.

Officials from GE Aviation, Boeing and American Airlines were on the scene at O’Hare assisting in the investigation, GE’s Kennedy said.

The CF6 was introduced in the 1970s and more than 4,000 are currently in service on seven different wide-body jetliner models, including the Boeing 747 and 767, and Airbus A300 and A330, according to GE. The engine has racked up more than 400 million flight hours and has a record of “industry-leading levels of reliability,” Kennedy said.

The O’Hare incident marks the third uncontained GE engine failure in little over a year, following a British Airways Boeing 777 in September 2015 and a Southwest Airlines Boeing 737 in August. Both aircraft used different engines, the GE90 and CMF56, made by a joint venture of GE and Safran of France.

This Technology Will Make Missing Planes a Thing of the Past

In a full-power ground test situation in 2006, an American Airlines 767 with GE CF6 engines suffered an uncontained failure, according to a summary produced by the Aviation Safety Network, a service of the Flight Safety Foundation, an international nonprofit based in Alexandria, Virginia.

The “rupture of the high pressure turbine stage 1 disk” was traced partly to inadequate GE design of the disk and poor FAA oversight of inspections, according to the summary.

The high pressure turbine of the CF6-80A engine used on the 767 has been cited in six regulatory actions by the Federal Aviation Authority since 1986, FAA records show. The most recent, in 2009, required airlines to remove an engine rotor within 30 days and reduced the allowed lifespan of an engine disk, conditions that could lead to cracks and uncontained engine failure, according to FAA records.